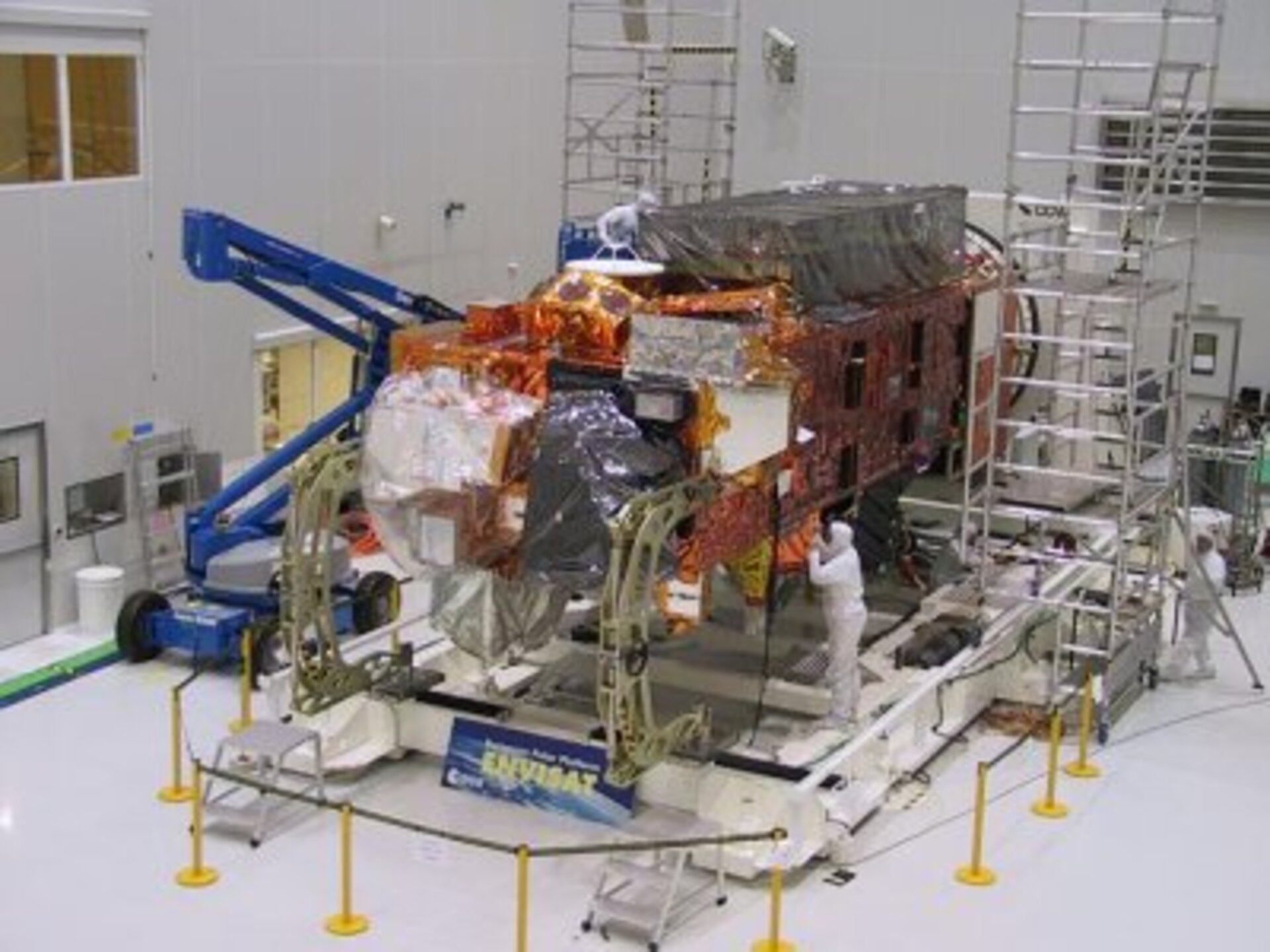 Two electrical functional tests of the service module, one with the main circuits, the other with the redundant circuits, were carried out, successfully. The telecommand and telemetry were passed through the same antennas as the ones which will be used in orbit and thus did not pass through umbilical cables. These tests also included health checks of the attitude control detectors and of the safe-mode heaters. A complete inspection of the satellite to confirm it is clean was performed. The clean tent around SCIAMACHY was removed. We are definitely coming close to the launch! Everything is nominal so far.

The second and third (and last) SCAPE training sessions also took place today. SCAPE are the sort of space-suits which will be used by the members of the fuelling team to protect themselves from Hydrazine. These training sessions reproduce, as much as possible, the real conditions of fuelling: air breathed through umbilicals, long duration, real operations. The first training session had shown that there was not enough space between the fuelling equipment and the walls of the clean room to be able to move comfortably with these cumbersome (sort of) space-suits. All the equipment was moved towards the centre of the room.

As I wrote yesterday, there is a large choice of Clios available on the carpark, with keys in the ignition and ready to go, because of the danger of the presence of hydrazine. And, indeed, it happened : Adrie took my car and found that there was something strange in the seat adjustment, the smell (?) and the mileage counter. 660 AMP is my car, thank you to leave it where it is!

Another very busy day: The deployment mechanism of the communication antenna with Artemis was armed for flight. This consisted mainly in tightening the four big springs and putting back in place the two rods which connect the springs with the shaft. The large mirror of GOMOS and its pointing mechanism were released then stowed again, for the last time before flight. It a regular maintenance activity which had already been done in October 2001. A SCIAMACHY reduced functional test was performed. Actually the test was quite complete. It went up to run a complete simulation of observation, without anything to observe, of course. The two internal mechanisms and the internal lamp used for the calibration of the detectors were activated. GOMOS and SCIAMACHY are two instruments which measure, by two different methods, the quantity of greenhouse gases in the atmosphere. Everything was nominal.

French Guyana has an area of 84000 km2 as opposed to what all the books say: 91000 km2. The error came with a map drawn in 1926 and which located the source of Oyapock 70 km too far towards the south. Oyapock, a 470 km long river, constitutes the south-eastern border of French Guyana. In 1960, the IGN maps corrected the error. However, the new figure of 84000 km2 has difficulty to find its path in the minds.

Launch in one month!
This weekend we completed the electric integration of the batteries. The tests of the electric connections are all normal. Saturday, we were concerned by the grounding resistance of the batteries which was 780 times above the maximum authorized. Actually, we found that the high resistance was in the connections with the measurement equipment and not in the batteries. The connection was checked and corrected. The grounding resistance of the batteries is now nominal. After these measurements, a functional test of the power sub-system of the satellite was carried out and found to be satisfactory. As the integration of the batteries is now complete, the satellite was brought to horizontal with the instruments on the top. Two instrument tests will be carried out tomorrow, in this configuration.

Hydrazine arrived this afternoon: two 400 Kg tanks. The two tanks are now in clean room S5A which is, from now, on closed to the personnel not strictly necessary. The safety measures on the site were reinforced for all people. The two principal ones are : 1- always have a gas mask at hand in the vicinity of S5A. 2- always park the cars in the direction of the exit, with the windows closed the key in the ignition. If you want a CLIO, there is a large choice on the carpark!

A clarification to start with: It is not a satellite we have in the clean room. As a matter of fact, Envisat is going to become a real satellite only when it is in orbit. Before it is put in orbit it may be a spacecraft or a space vehicle but not yet a satellite. Nonetheless and despite the inaccuracy of the terminology, I shall continue to use either satellite or spacecraft.

The mechanical integration of the battery plate inside the base of the satellite is now completed. The vents to let the air escape from the battery compartment during the ascent are in place. Envisat was transferred from the vertical stand to the main integration stand, with which Envisat can be put in (almost) all directions. Integration and tests will continue there. The only major problem reported by our Prime Contractor is the opening of a McDonalds in Kourou on next Monday!

Questions & Answers: I received a detailed question about what I do at the European Space Agency. Here is the answer:

Title and function in ESA: Principal Structure and Mechanisms Engineer. Project Envisat.
Task in Kourou: Despite my formal title and function, my task in Kourou is to take care of the integration and tests of Envisat and its preparation for the flight, plus some other minor activities. In fact I act as principal integration and test engineer.
Time spent in the project: I've worked in the Envisat project since 1991. I witnessed the whole of the development of the instruments. The development of the platform had already started by then.
Principal contribution to the project: In 11 years, there is quite a bit! I followed all the instruments from the area of structures and mechanisms, design, integration and tests. Then, at the beginning of the integration of the flight model, I took over the whole of the satellite, in the area of structures and mechanisms, design, integration and tests. My main achievement is to have supervised the vibration tests of Envisat, on the new ESA shaker, never used before, and to have completed these tests in 7 day (a record), with of excellent results, immediately approved by Arianespace.
Exploitation of Envisat: I am a mechanic and I will not be involved in the use of Envisat except, indeed, if one of the mechanisms fails in orbit. Of course, I have a good idea of what will be done but I will not take part in it.
After Envisat: I already started to work on my next project: ADM-Aeolus, a small satellite (compared with Envisat: 1 ton, 3 metres) which will carry in 2007 a Lidar to measure the speed of the winds over the whole surface of the Earth and through the thickness of the atmosphere.

Envisat: The battery plate was ready for integration yesterday evening. It was slipped on air cushions under the satellite. The satellite was then lowered by the means of three big jacks, until it touched the plate. The plate was then fixed by 144 screws. That was slightly more complicated than it seems. The batteries are charged and the terminals of the battery elements are exposed. The smallest contact with a metallic part of the structure would cause a short circuit which would cause considerable damage. And to lower an 8 tons satellite to achieve an accurate adjustment is not like raising or lowering a car with a jack! We are slightly ahead on our schedule but as our project manager says, 'It never harms to arrive a little in advance!'

I received a question about the consequences of a launch abort on Envisat. Yesterday, Insat launch was delayed by about 50 minutes. This delay remained within their launch window and the launch could take place on the same day. Envisat has a precise launch time and no window at all. Thus, any interruption of the automatic sequence (6 last minutes) will lead to postpone the launch by one full day, at best. Our Ariane 5 can remain 14 days on the launch pad. Envisat can also remain 14 days on the launch pad. The only significant intervention will be to replace, every four days, the nitrogen bottles which are inside the launch table and which continue to purge the instruments of Envisat under the fairing. The bottles have an autonomy of 4 days only.

The story of the day is indeed the launch of Insat3C tonight by an Ariane 42L. This launch has some impacts on us. First, we must have evacuated our building by 18:30. In addition, there is an atmosphere of excitment, caused by visits and search for seats to watch the launch, not very compatible with our delicate work. There will be another Ariane flight prior to Envisat: Intelsat904. But Intelsat has a problem with its electrical power system and its flight was delayed from 14 February to 20 February. This still leaves enough time to prepare for our flight. However, it would better not slip anymore!

The conditioning of the 8 batteries is now completed. They are charged and will remain charged to the maximum till launch. Final preparation of the battery plate and measurements of electric insulation of the batteries are in progress. The 3 access panels of the satellite service module are now closed and fixed. The solar array drive mechanism, which makes the solar array always face the sun, is also locked for flight. In brief, an intense and productive day, despite INSAT launch.