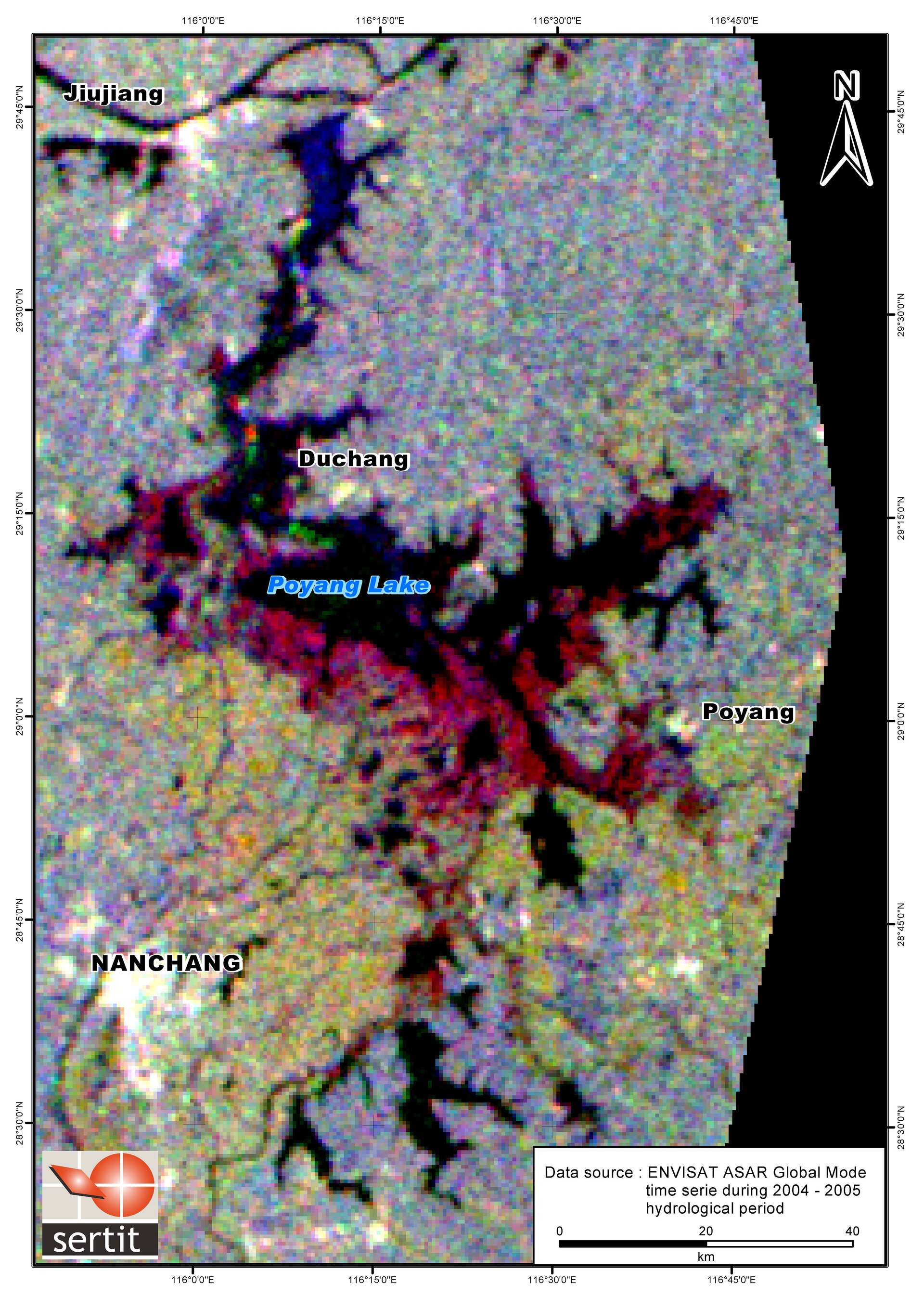 Poyang Lake is situated in Jiangxi Province, around 50 kilometres north of the city of Nanchang. The Lake's basin is one of the People's Republic of China's most important rice-producing regions, but local inhabitants must contend with massive seasonal changes in water level, topped by regular severe floods.

Poyang Lake is connected to the Yangtze (Chiang Jiang) River through a narrow channel. In the dry season of a normal year, the area of the Lake shrinks to less than 1000 square kilometres, but by the end of the rainy season its size can grow up to 3500 square kilometres.

Improved understanding of Poyang Lake's annual dynamic could help with flood mitigation as well as improved ecological characterisation of the surrounding landscape. Accordingly a radar sensor aboard Envisat was used to regularly monitor the Lake during 2004 to 2005.

Envisat's Advanced Synthetic Aperture Radar (ASAR) instrument records the signal reflectivity of the Earth's land, sea and ice surfaces, and works on even through clouds, rain or local darkness. ASAR functions in various different modes – Global Monitoring Mode (GMM) data being acquired continuously over the land as part of the satellite's background mission.

GMM images have a comparatively low spatial resolution of one kilometre, but with a swath of 400 kilometres they have very wide coverage and a frequent revisit time, useful for tracking dynamic features.

Up until now GMM has mainly been utilised for monitoring icebergs but Strasbourg-based rapid mapping specialists SERTIT began investigation of its potential for following seasonal water level changes on Poyang Lake as part of the Flood Rapid Mapping element of the Dragon Programme, a joint undertaking between ESA and the National Remote Sensing Centre of China (NRSCC), part of China's Ministry of Science and Technology (MOST).

The images were processed and analysed, the results being checked against a reference database of optical Landsat mosaics and a Shuttle Radar Topography Mission (SRTM) Digital Elevation Model (DEM) as well as local ground-truth information.

Spatial analysis of the results throws up a lively picture: less than 10% of the maximal Lake surface is made up of perennial water bodies, with 38% of the surface covered by water more than six months a year, and a little more than 50% covered by water for less than six months. Some 20% is under water less than 36.5 days – a tenth of the year. Major cities in the region were also charted, showing up briefly in the radar signal return.

GMM data acquisition will continue into subsequent hydrological years, and higher-resolution ASAR Mode images are also been acquired to add detail to the picture so far, plus images from Envisat's optical Medium Resolution Imaging Spectrometer (MERIS) sensor as well as local hydrological and meteorological data.

Now this ASAR GMM technique has been established, SERTIT believes it could be applied to similar water bodies in China, such as flood-prone Dongting Lake – the country's second largest freshwater body – in Hunan Province as well as elsewhere across the world.

Flooding is classed as the world's most costly type of natural disaster. As part of Dragon, Envisat ASAR and MERIS images have also been acquired and processed in near-real time for mapping of flood events and as inputs for flood risk management.

China saw major flooding during the 2005 season, including a more than once-in-a-hundred-year flood that occurred in the middle and upper reaches of the Xijiang River of the Pearl River Basin. The Hanjiang and Weihe Rivers experienced autumn flooding and flood-induced landslides took place in Hunan and Heilongjiang Provinces.

Some 1247 people were killed and another 331 left missing following these floods and landslides. At least 15 million hectares of cropland has been destroyed and 1.17 million houses ruined, with direct economic losses estimated to be as high as 136 billion Yuan (14.2 billion Euro).

However throughout the flood season, Envisat ASAR imagery was rapidly made available in near-real time to Dragon Rapid Mapping Principal Investigator Professor Li Jiren, of the Remote Sensing Technology Application Centre of China's Ministry of Water Resources, as a means for the authorities to identify floodwater extent and coordinate mitigation efforts.

Speaking at an October Dragon progress meeting, Prof. Li stated that ASAR had proved very useful in flood monitoring during the season, with near-real time data acquisition being particularly important. The sensor's rolling data archive was also utilised. Next season the aim is continue this real-time monitoring demonstration for China.

Flood monitoring is only one of numerous Dragon Programme research themes, which range from agriculture and forests to seismic activity and landslide monitoring, assessing drought, air quality, oceanography and climate. Dragon formally began in April 2004. Since then more than 4000 radar images from Envisat and ESA's ERS missions have so far been delivered to Dragon teams.

The course had a particular focus on the use of Envisat ASAR as well as optical and thermal sensors, and also included briefings on future Chinese and ESA Earth Observation missions for land applications.