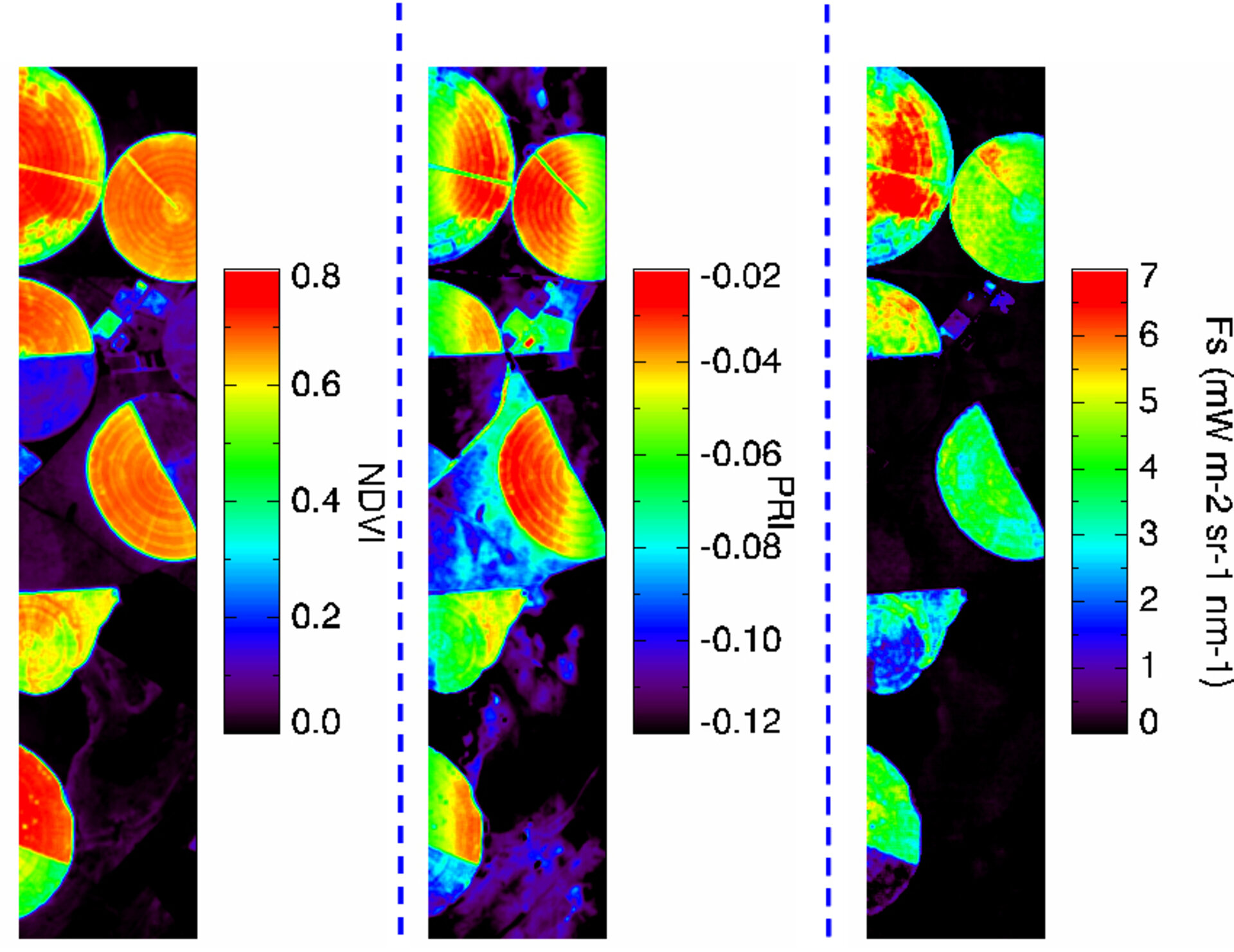 A novel measuring technique that has the potential to map photosynthesis on a global scale from space proves possible, as the results from last year's intensive SEN2FLEX campaign are reviewed at a recent workshop. Results from the campaign also realised important definitions for the Sentinel-2 mission, as well as feedback to aid the management of Europe's water resources.

As its name suggests, the airborne SEN2FLEX (SENtinel-2 and FLuorescence EXperiment) campaign, which was carried out at the Barrax test site near Albacete in Spain between May and July 2005, involved more than one objective. The Fluorescence Experiment set out to observe solar induced fluorescence signals over different vegetation types to verify that the signal could be observed from space by a potential mission to monitor global photosynthesis. The 'SEN2' part of the campaign was to provide feedback about the optimal multispectral configuration for the Sentinel-2 mission, currently being defined under the GMES (Global Monitoring for Environment and Security) initiative. Thirdly, (although not indicated in the name of the campaign) it was to provide feedback on Earth Observation data requirements necessary to fulfil the European Union Water Policy Directive within GMES.

After more than a year of analysis, scientists gathered at a dedicated workshop held ESA-ESTEC in the Netherlands on 30-31 October to present the very encouraging results of this multi-faceted campaign that is helping pave the way for future Earth Observation missions.

José Moreno from the University of Valencia in Spain, coordinator of the SEN2FLEX campaign, stated that, "Despite the complexity of such a large campaign with multiple objectives, the obtained results can be qualified as excellent in the three areas. Firstly, detection, quantification and exploitation of the spatial variability in fluorescence response of vegetation under varying solar illumination. Secondly, improved definition of spectral and radiometric requirements to optimally derive soil and vegetation products from Sentinel-2 simulated data, and thirdly, evaluation of new Earth Observation techniques for monitoring water resources and improved water management, with the development of techniques that are now in fact used operationally by water management authorities in areas suffering water deficit. Moreover, the large database acquired during the SEN2FLEX experiment remains available for future studies."

The SEN2FLEX campaign provided the opportunity to carry out a historical first as it was the first time that measurements of fluorescence had been acquired by a new instrument called AIRFLEX. Solar induced fluorescence emitted by vegetation is an indicator that relates directly to photosynthetic activity. This occurs when part of the sunlight absorbed by chlorophyll in plants is re-emitted at longer wavelengths as fluorescence. However, the fluorescence signal is very weak. Although it has been routinely used in laboratories to study photosynthetic activity, until the campaign was carried out last year, it had never been measured on a large-scale. Measuring fluorescence from space would provide a direct measurement of the vegetation's ability to absorb atmospheric carbon dioxide, which, if mapped at global scales, would lead to greatly improving our understanding of the carbon cycle and climate change.

Developed under ESA contract by the Fluorescence and Remote Sensing Team from the LMD (Laboratoire de Météorologie Dynamique) in Paris and led by Ismael Moya, the AIRFLEX instrument allows the chlorophyll fluorescence emission to be measured in two spectral bands simultaneously - at 687 and 760 nm. The instrument was installed on a DLR Caravan plane and flown several times in the same conditions to prove that the fluorescence signals were highly reproducible. The spectral fluorescence signature was used to map the evolution of growth for different vegetation types. The instrument was also flown at various altitudes to ensure that the different atmospheric conditions could be corrected for appropriately. The results proved very rewarding, as for the first time, it was possible to see how the fluorescence signal, measured from an airborne platform, varies with the vegetation.

Ismael Moya pointed out that, "Results of the campaign can easily be extrapolated for the detection from a satellite platform. There is now no doubt that fluorescence could be accurately measured in spite of its weakness. It is expected that this demonstration will provide positive feed-back to the scientific community to stimulate field research for a better understanding of fluorescence variations under natural outdoor conditions."

Since the SEN2FLEX campaign was carried out, a candidate Earth Explorer mission called FLEX was one of the missions selected within ESA's Living Planet Programme to undergo further study in May this year. The main aim of the mission is global remote sensing of photosynthesis through the measurement of fluorescence. Needless to say, SEN2FLEX proves very opportune in helping with the definition of this potential new Earth Explorer mission.

In addition to the AIRFLEX instrument, the campaign aircraft was also equipped with a hyperspectral sensor called Compact Airborne Spectral Imager-3 (CASI-3) that operates in the visible to near-infrared and a sensor called Airborne Hyperspectral Scanner (AHS) to provide complementary measurements into the shortwave infrared and thermal infrared. During the campaign flights these instruments were used to collect data to help evaluate the potential spectral configurations for the Sentinel-2 mission, which is one of the Earth Observation missions currently being defined under GMES.

Results presented at the workshop show that the campaign successfully acquired the simulation of Sentinel-2 products using different spatial, spectral and temporal coverage sensor configurations, thereby taking the development of the multi-spectral imager that will be carried on the satellite one step further.

The campaign was also successful in providing data on water fluxes from vegetation and soil moisture, demonstrating some practical contributions to the European Union's Water Framework Directive, which aims to help protect and manage Europe's precious water supplies. Currently satellite imagery is already being used for purposes such as deciding on appropriate amounts of irrigation. This is set to improve further with the development of the operational Sentinel-2 mission.

The datasets acquired by the campaign are crucial, not only for developing the usefulness of new technologies, but also for realising future space missions that will help us learn more about our planet, and on a very practical level, provide accurate information so that we can better protect our environment.