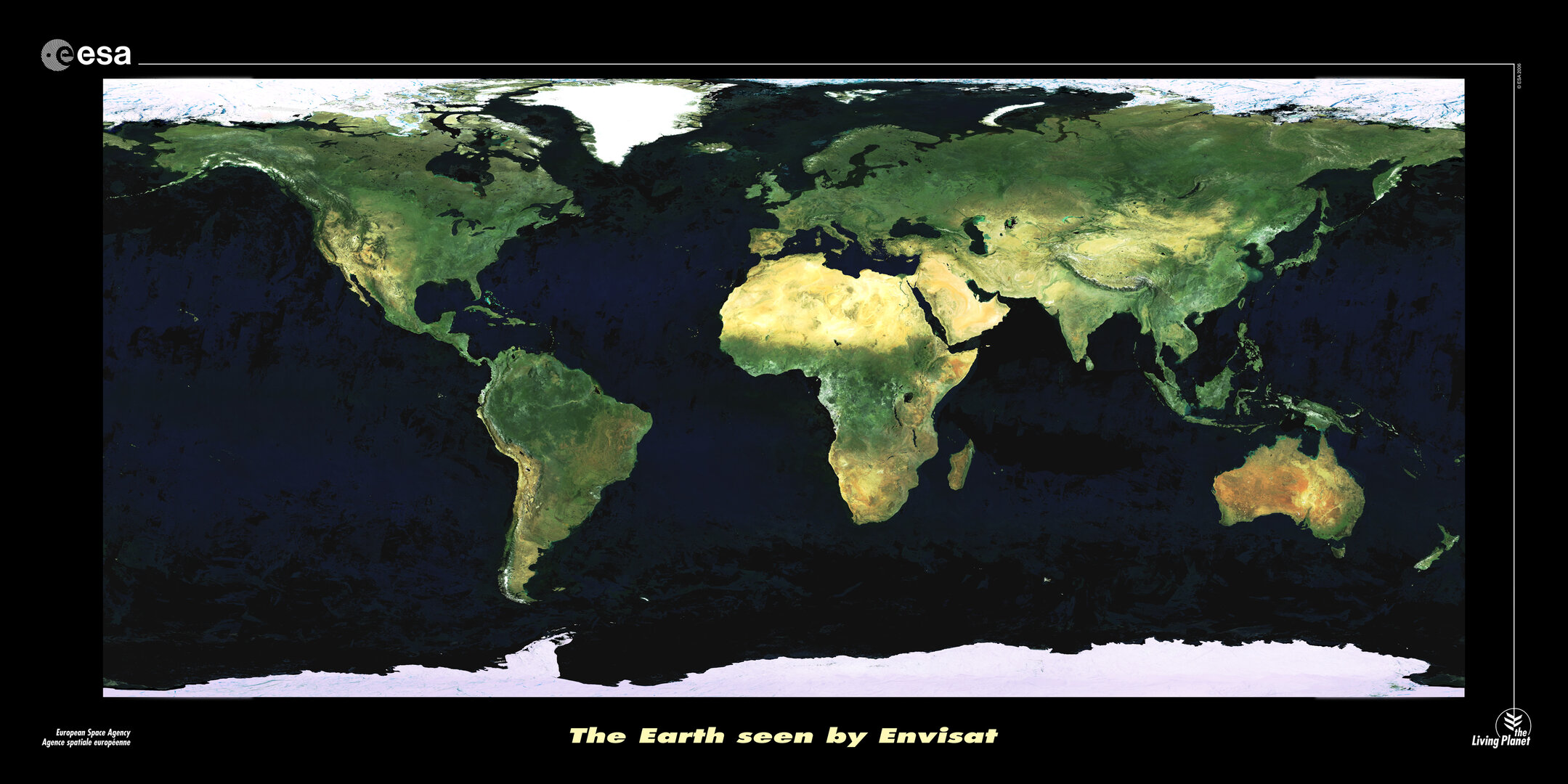 ESA PR 22-2006. The European Space Agency today donated a composite satellite image of global land cover provided by its Envisat satellite to the United Nations in Geneva, as a testimony to the current state of our planet, to be handed down to future generations.

The image will be exhibited permanently in the new access building by the Pregny gate in the Palais des Nations compound. Mr Sergei Ordzhonikidze, the Director General of the UN Office in Geneva, accepted the mosaic on behalf of the United Nations from Dr Volker Liebig, ESA Director of Earth Observation Programmes, donating it on behalf of the European Space Agency.

The image is a mosaic of global land cover images taken by the MERIS instrument onboard ESA’s environmental satellite which shows the entire planet ‘in its true colours’. To produce the mosaic, a total of 1561 satellite orbit passes were used over the period May-November 2004. “Forests, desert, mountains and oceans are clearly visible. The mosaic shows the state of the planet at the beginning of the 21st century from a perspective only satellites can deliver”, said Volker Liebig.

Launched in 2002, Envisat is the largest Earth observation spacecraft ever built. It carries ten sophisticated optical and radar instruments to provide continuous observation and monitoring of the Earth's land surface, atmosphere, oceans and ice caps. Envisat data combined collectively provide a wealth of information on the workings of the Earth system, including insights into factors contributing to climate change.

The Medium Resolution Imaging Spectrometer (MERIS) measures the solar radiation reflected by the Earth, at a ground spatial resolution of 300m, with 15 spectral bands in the visible/near-infrared regions and programmable in terms of width and position. It provides global coverage of the Earth every three days.

ESA and UNOSAT, the UN project concerned with satellite imagery access and applications, are partners in several initiatives and programmes aimed at extending the use of satellite technologies to facilitate the work of the international community and UN agencies in particular. UNOSAT, which forms part of UNITAR, the United Nations Institute for Training and Research, promotes projects and programmes designed to enable developing countries and local communities in particular to gain access to such technologies and supports humanitarian aid activities.

ESA cooperates closely with UN specialised agencies. Since 2000, it has launched initiatives with a view to using observation technology to support the implementation of key multilateral environmental agreements such as the United Nations Framework Convention on Climate Change. Since the Johannesburg World Summit on Sustainable Development in 2002, ESA has been cooperating closely with UNOSAT and UN agencies on sustainable development projects and projects geared to Global Monitoring for Environment and Security (GMES) service development.