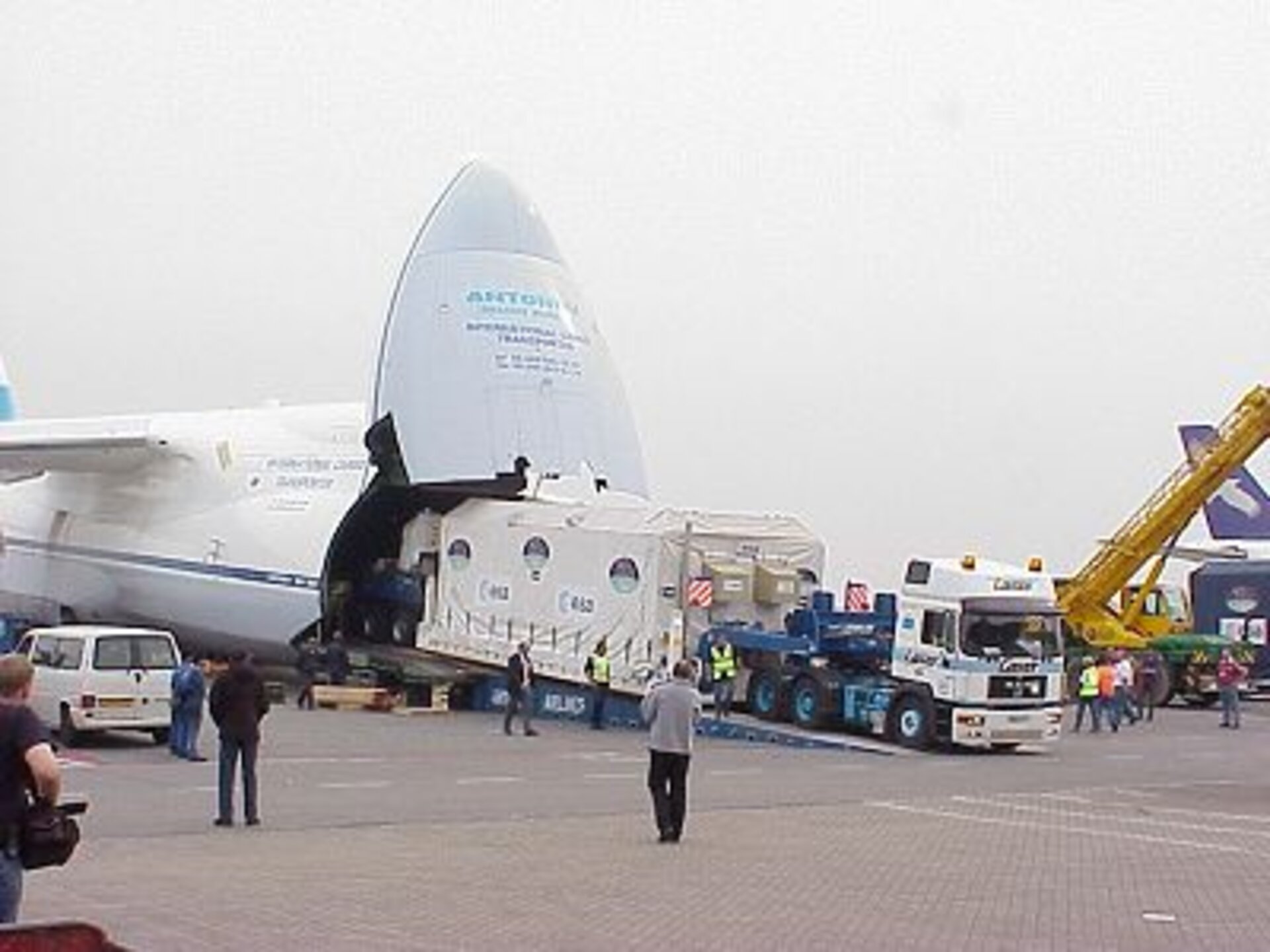 The gestation period was ten years, and the preparations were intense. Now the waiting is nearly over, and the European Space Agency's ambitious new Earth-observing satellite Envisat is en route for Kourou in French Guiana where engineers will prepare the satellite for its launch this autumn.

The journey began at 10.15 CET on Monday when the 2-billion Euro satellite and its police escort left the European Space Research and Technology Centre (ESTEC) in Noordwijk, The Netherlands for Amsterdam's International Airport. Here Envisat was loaded on to an Antonov 124, the only transport aircraft large enough. Two 747s and the transport ship Toucan are additionally carrying nearly 400 tonnes of testing and support equipment to the launch site.

The satellite is pivotal in ESA's strategy for Earth observation. From its vantage point of an 800-kilometre-high orbit over the Earth's poles, the satellite will, for the next five years, monitor environmentally crucial processes as diverse as changes in ocean circulation, the ice caps, land use and atmospheric pollution.

Its instruments are either new developments or major improvements of those that flew on ERS-1 and -2, the Agency's groundbreaking Earth observation satellites of the 1990s. Besides contributing to a broad range of science and application, Envisat's multiple instruments will play a crucial part in helping to implement an initiative on global monitoring for the environment and security proposed last year by ESA, the European Commission and the French Space Agency.

Envisat has its roots in a time in the late 1980s when the philosophy within space agencies around the world was to develop large multi-purpose missions. At the time satellite and launcher technology were less sophisticated and flexible than they are today, economies of scale underpinned much thinking about technological development in general and the thinking was that a broad range of applications were needed to justify any space project.

Since then space technology has moved on, and there is increasing emphasis worldwide on small, flexible missions that can be developed quickly and cheaply. "Certainly Envisat's size and multiple missions make it risky, and we are now moving to a new logic and era that will see the launch of small satellites with specific missions," says Claudio Mastracci, ESA's director of space applications, "but Envisat is a miracle of engineering and it will provide invaluable data for environmental monitoring."

One of the satellite's strengths, he argues, is that it could provide data for 7 to 10 years (design life is five years, but both ERS-1 and ERS-2 have significantly exceeded their design life), which would allow continuity of observation over slowly changing environmental phenomenon.

For the moment, though, it is not Earth-observing strategy that is at the forefront of the minds of the Envisat team, but the welfare of the satellite that has captured their professional attention for the past decade. Earlier this year, the satellite was fully assembled to permit a final test of every instrument, antenna, microprocessor and line of software.

Vibration testing exposed the satellite to forces equivalent to those from an earthquake of 7.5 on the Richter scale, and acoustic tests battered the satellite with the volume of 156 rock concerts. For a month, the satellite sat in massive chamber from which all the air was sucked, exposing the spacecraft to the hard vacuum and extreme temperatures of space. During that time, software engineers tested the thousands of lines of code that will control the satellite's operations and instruments.

In separate radio frequency tests, all the antennas were operated simultaneously to ensure their transmission patterns did not overlap in unforeseen ways. Each instrument was switched on to check that its electromagnetic field did not impinge on the operation of nearby microprocessors.

Every test indication was that Envisat will withstand the rigours of its launch aboard an Ariane-5 rocket and is ready for its task in orbit.

With the testing complete, engineers disassembled Envisat into two sections small enough for shipping. After arrival in Kourou in the early hours of 16 May, it will be allowed to sit for a day so that the air temperature inside the shipping cases equalises with that in French Guiana. Then engineers will open the cases to begin assembly of the satellite, make final tests and integrate Envisat with the Ariane-5 for launch. The coming months will see the culmination of 10 arduous years of complex engineering, and then Envisat will be ready to begin its task. "I am," says Mastracci, "very proud of the teams at ESTEC and ESRIN and of the scientists and industrialists around the Agency's Member States [Canada is an associate member] who have worked on Envisat and are preparing to exploit its data."