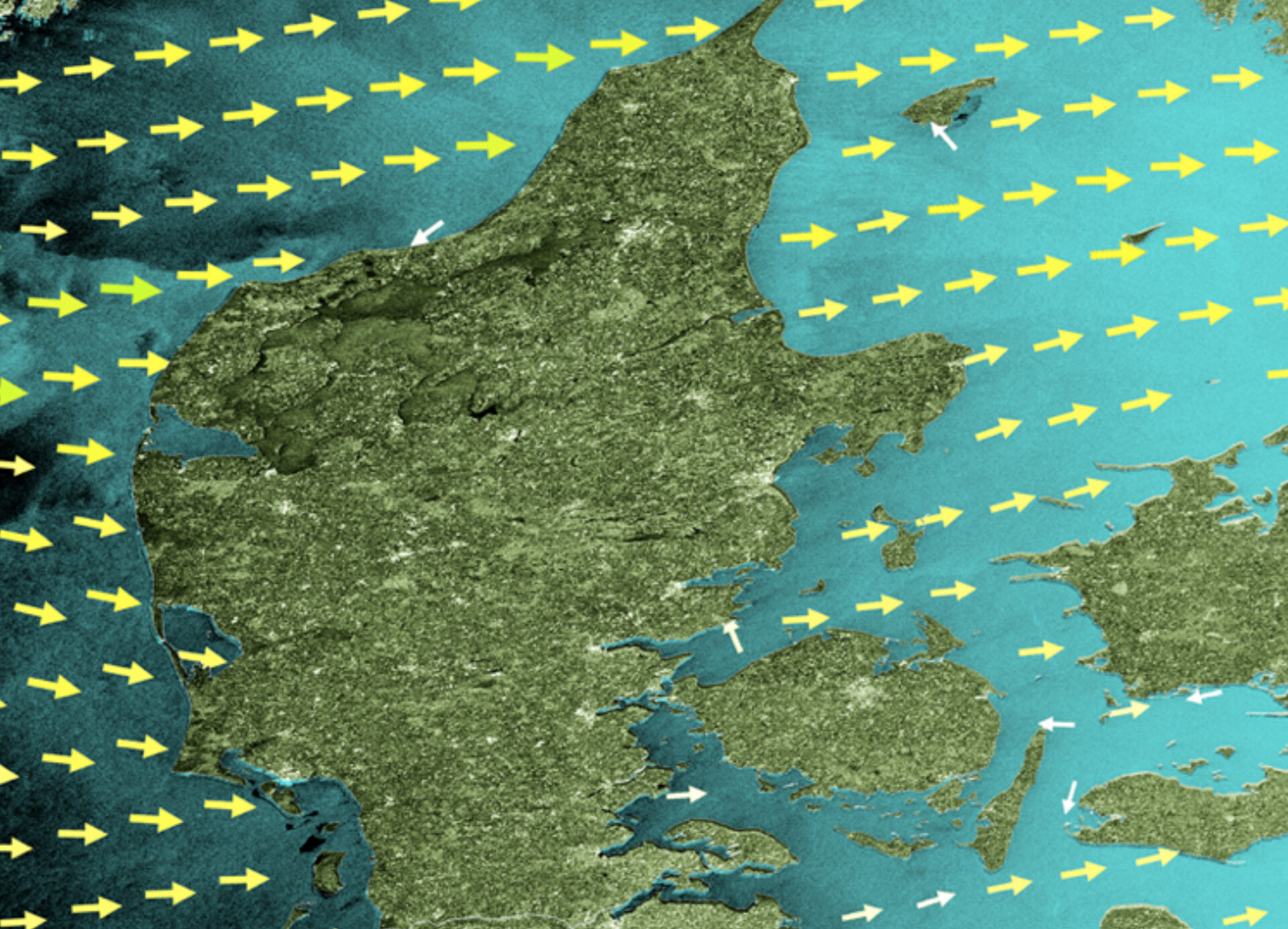 This Envisat image shows the wind fields over the North Sea around Denmark and northern Germany. The image is centred over the Jutland Peninsula of Denmark, with the German state of Schleswig-Holstein in the lower half.

The wind fields are derived from radar observations, with the speed values ranging from 0 km/s to 32 km/s. Wind speeds and directions are indicated by the size and colour of the arrows. Studies using wind field observations during longer periods provide insight into the area’s clean energy potential. False colouring was applied to the sea and land areas in this originally black and white radar image.

Wind power is contributing significantly to Danish efforts to reduce emissions from carbon dioxide, the most important greenhouse gas that contributes to global warming. In 2002, the first offshore wind farm in the North Sea was built about 15 km off the westernmost point of Denmark at Horns Rev (pointed tip on west coast). The farm comprises 80 wind turbines and generates 160 megawatts, nearly 2% of Denmark's total electricity consumption.

In 2009, construction was completed on an additional wind farm in the area, Horns Rev 2. The farm, which is now the world’s largest offshore wind farm, comprises 91 wind turbines and is projected to generate 209 megawatts, or enough electricity to supply 200 000 households. The combined capacity of the two farms is 369 megawatts, which could supply approximately 350 000 homes with electricity.

This image was included in the new ‘Environmental Atlas of Europe’ that premiered at the UN Climate Conference in Copenhagen on 13 December. The atlas, a joint project of the European Environment Agency, the UN Environment Programme and ESA, is a series of short films showing the significance of environmental change depicted in comparisons of stunning satellite images through the years and the different ways people are responding to these changes.

One of the stories featured in the film is about a community in Denmark’s Thisted Municipality (visible in northwestern Jutland) that has achieved 100% of its power consumption and more than 80% of its heat consumption without the use of fossil fuels. The renewable energy comes from Sun, wind, geothermal power and biomass. In 2007, Thisted Municipality was awarded the European Solar Prize for its work on using renewable energy.

Off the east coast of the peninsula, the islands of Laeso (top) and Anholt are visible. Fyn Island (right of image centre) and the western part of Sjaelland Island (northeast of Fyn) can also be seen. Sjaelland links the capital city of Copenhagen (not visible) to the mainland. Sweden is visible in the upper right corner.