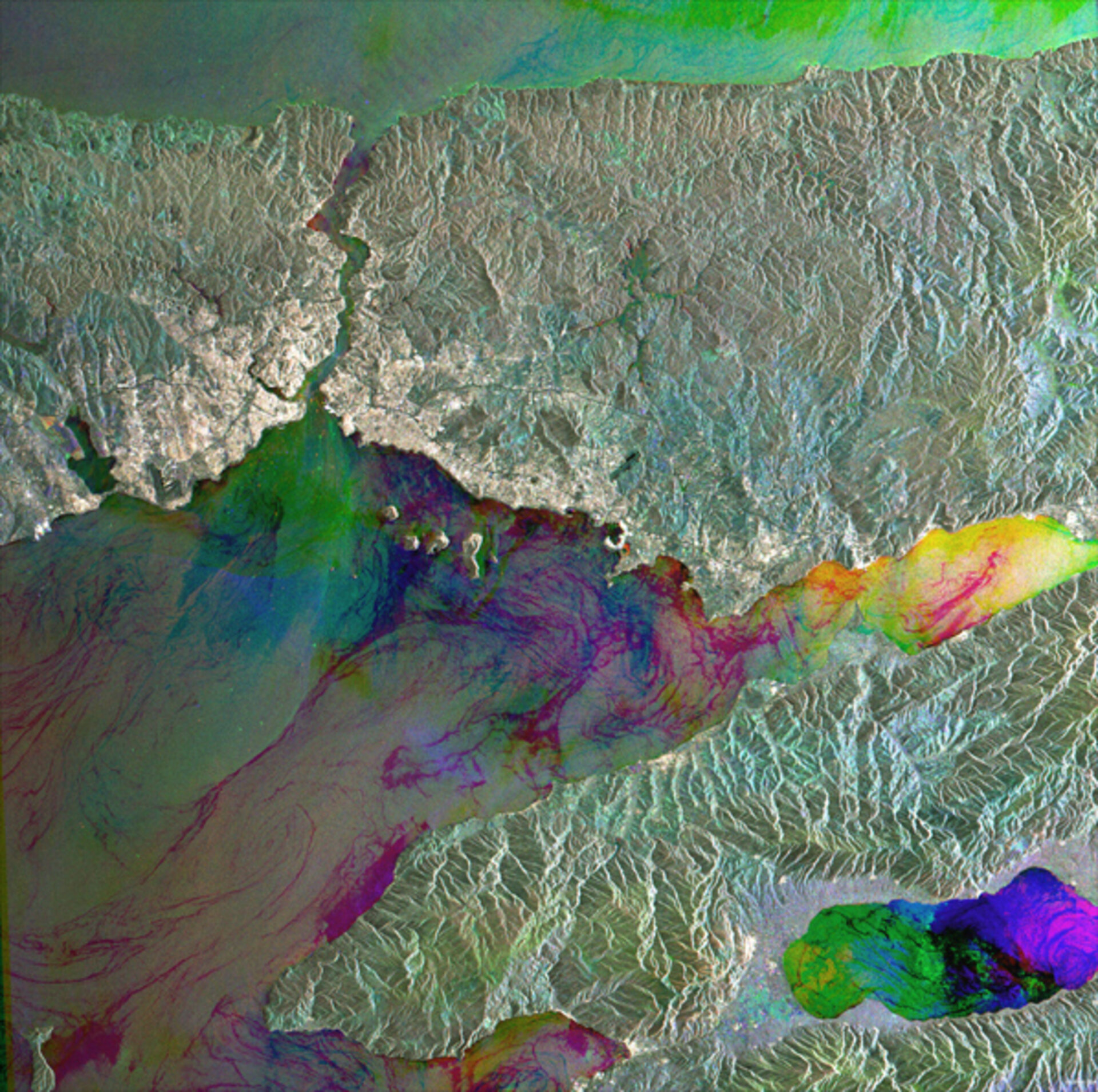 The city of Istanbul, located astride the eastern edge of Europe and western edge of the Asian continent, shown in an Envisat radar multi-temporal composite image.

What is today Europe's third largest urban centre has been a major city for the last two thousand years. It has known three different names in that time: Byzantium when it was the gateway to Greek settlements on the Black Sea, Constantinople when it became the capital of the Eastern Roman Empire, then Istanbul when it fell to Muslim invaders in 1453.

In 1919 Istanbul lost its position as capital of Turkey, but remains that country's leading economic centre. Its population has grown from 2.84 million in 1970 to around ten million today, with settlers flocking from rural areas of Anatolia. Around 30% of all the cars owned in Turkey are in Istanbul.

Urban areas show up as white in this image – the brightest areas being the most densely built-up. Among the densest is the old town, located on the west side of the city on the Eminönu Peninsula, below the river estuary known as the Golden Horn. Further west along the coast are the runways of Ataturk International Airport.

Istanbul owes its prosperity to its status as a link between the Balkans, the Middle East and Central Asia, and to the high level of shipping that travels through the narrow Bosporus (Bosphorus) channel dividing Europe and Asia.

Some 48 000 ships pass through the Bosporus annually, three times denser than the Suez Canal traffic and four times as dense as the Panama Canal. Around 55 million tonnes of oil are shipped through here each year. Look closely along the Bosporus and bright points from individual ships can be seen. Also visible are the two bridges connecting the two continents, crossed by at least 45 000 vehicles daily.

Note the chain of islands known as the Princes' Islands (Kizil Islands) off the east side of Istanbul. The city faces onto the inland Sea of Marmara (Marmara Denizi), which has an area of around 11 350 square kilometres. The Bosporus links the Sea to the Black Sea. Note also Lake Iznik (Iznik Golu) towards the south-east corner of the image.

Because radar images measure surface texture rather than reflected light, there is no colour in a standard radar image.

Instead the colour in this image is due to it being a multitemporal composite, made up of three Advanced Synthetic Aperture Radar (ASAR) images acquired on different dates, with separate colours assigned to each acquisition to highlight differences between them: Red for 31 July 2003, Green for 17 April 2003 and blue for 26 February 2004.