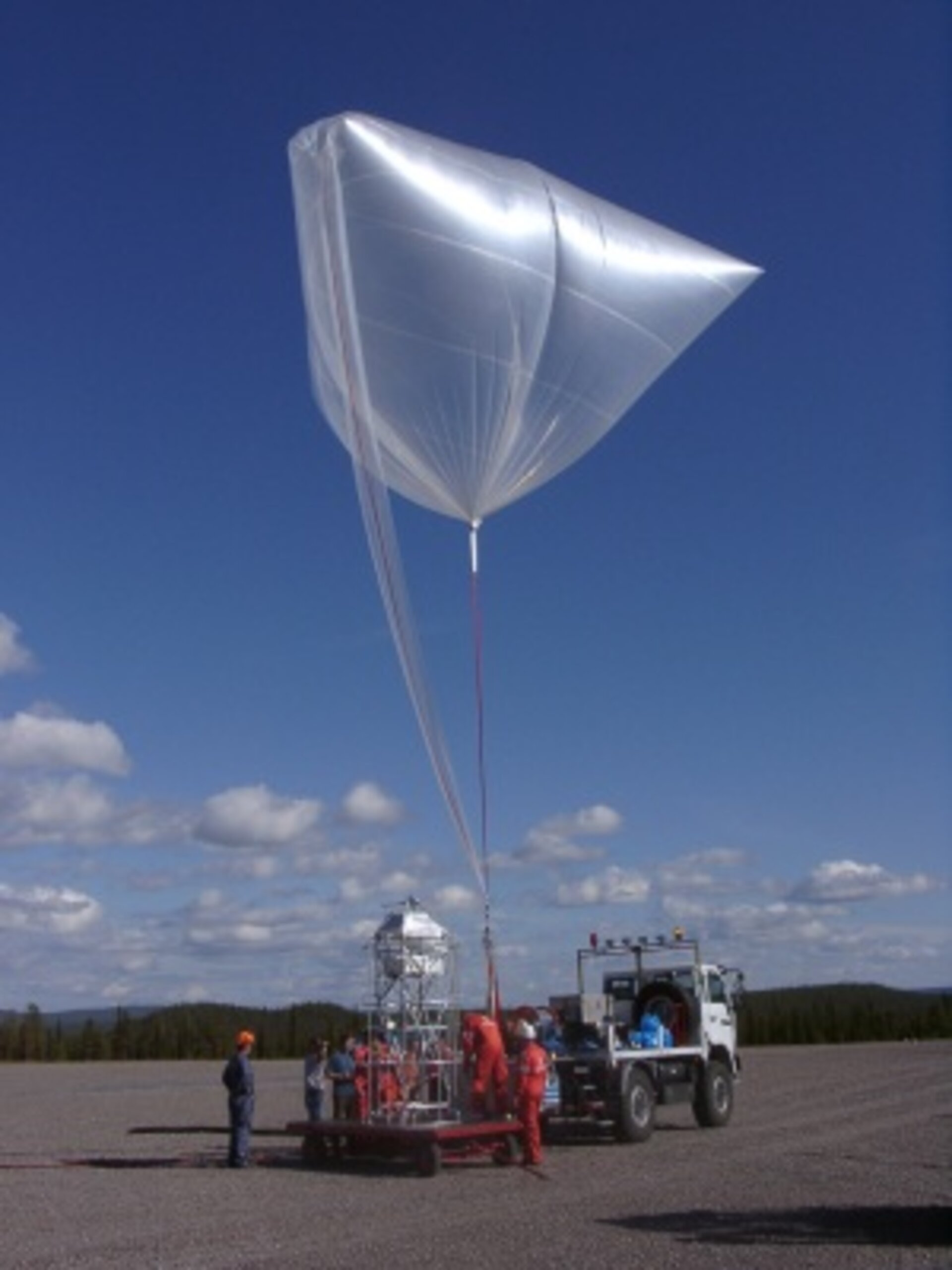 The Envisat Stratospheric Aircraft and Balloon Campaign (ESABC) continued last month in the north of Sweden where 4 balloon flights were successfully carried out. The objective of these balloon flights is to validate the data of Envisat’s 3 chemistry instruments at high latitudes.

The balloon flights are an important component of the larger ESABC campaign, which began in Italy in July and is set to continue for the next 12 months. The campaign as a whole is designed to check the results from the MIPAS, GOMOS and SCIAMACHY chemistry instruments on board Envisat. This is achieved by taking independent atmospheric measurements using airborne remote sensing and in-situ instruments as Envisat passes over the campaign launch area. The instruments on Envisat are then validated by confirming that the data from Envisat are consistent with the independent data taken during the campaigns. These validation campaigns play an important role in obtaining good vertical resolution measurements, far better than using data taken from the ground. Although such atmospheric campaigns are expensive to implement, the advantage of retrieving such high accuracy data and ease with which in-situ measurements can be interpreted justifies the cost. In order for the validation programme to be as complete as possible the ESABC campaign is to measure atmospheric constituents at different latitudes and during several seasons. The main purpose of the balloon flights launched from Kiruna in Sweden is to validate the chemistry instruments at high latitudes. Kiruna has been a major European site for atmospheric chemistry campaigns for more than 11 years and has played an important role in the observation of ozone depletion.

The campaign was carried out in this remote part of Sweden over a 3-week period in August. Despite the constant plague of mosquitoes the scientists and operational staff had to endure throughout their stay there, it was hailed as a complete success. Each of the 4 balloon flights carried a different instrument configuration provided by scientific teams from France, Japan, Germany and Finland whilst the actual launches were carried out by CNES (Centre National d’Etudes Spatiales) using the Swedish Space Corporation (SSC) facilities at the ESRANGE launch pad near Kiruna. Just 5 kilometres from Kiruna is the Envisat Receiving Station, which receives data from Envisat when the satellite is over northern latitudes – the station was fully operational throughout the balloon campaign.

The Swedish Space Corporation was also successful in recovering the instruments after the flights had been completed. In order for the payloads to be recovered the balloons themselves have to be remotely deflated and once they have descended from around 38-40 km to a height of around 30 km (the exact heights are calculated for each flight) the balloons are remotely ‘cut-off’ destroying the inflatable part of the balloon. This initiates the release of a parachute, which brings the payloads safely back to Earth. The data acquired during each flight are either stored on board or are transmitted by radio link to a CNES receiving station at ESRANGE. All the plastic remnants from the discarded balloons are always recovered for environmental reasons. Kiruna was not only chosen for reasons of latitude but also for reasons of safety because it is so remote, far away from urban development – the only local residents apart from the mosquitoes are reindeer.

All the scientific and operational teams have now returned to their home bases and are now actively preparing the next part of the ESABC campaign. This is due to take place in Aire sur l‘Adour in southwest France between mid-September and mid-October and will involve 6 balloon flights to further validate Envisat’s chemistry instruments at mid-latitudes under different atmospheric conditions.

During the first week of November the data collected during the ESABC campaign during July, August and September will be reviewed in order to prepare for a scientific workshop to be held on 9-13 December 2002 in ESRIN, Frascati, Italy.

For further information on the use of Aircraft and Balloons for the validation of ENVISAT please contact: