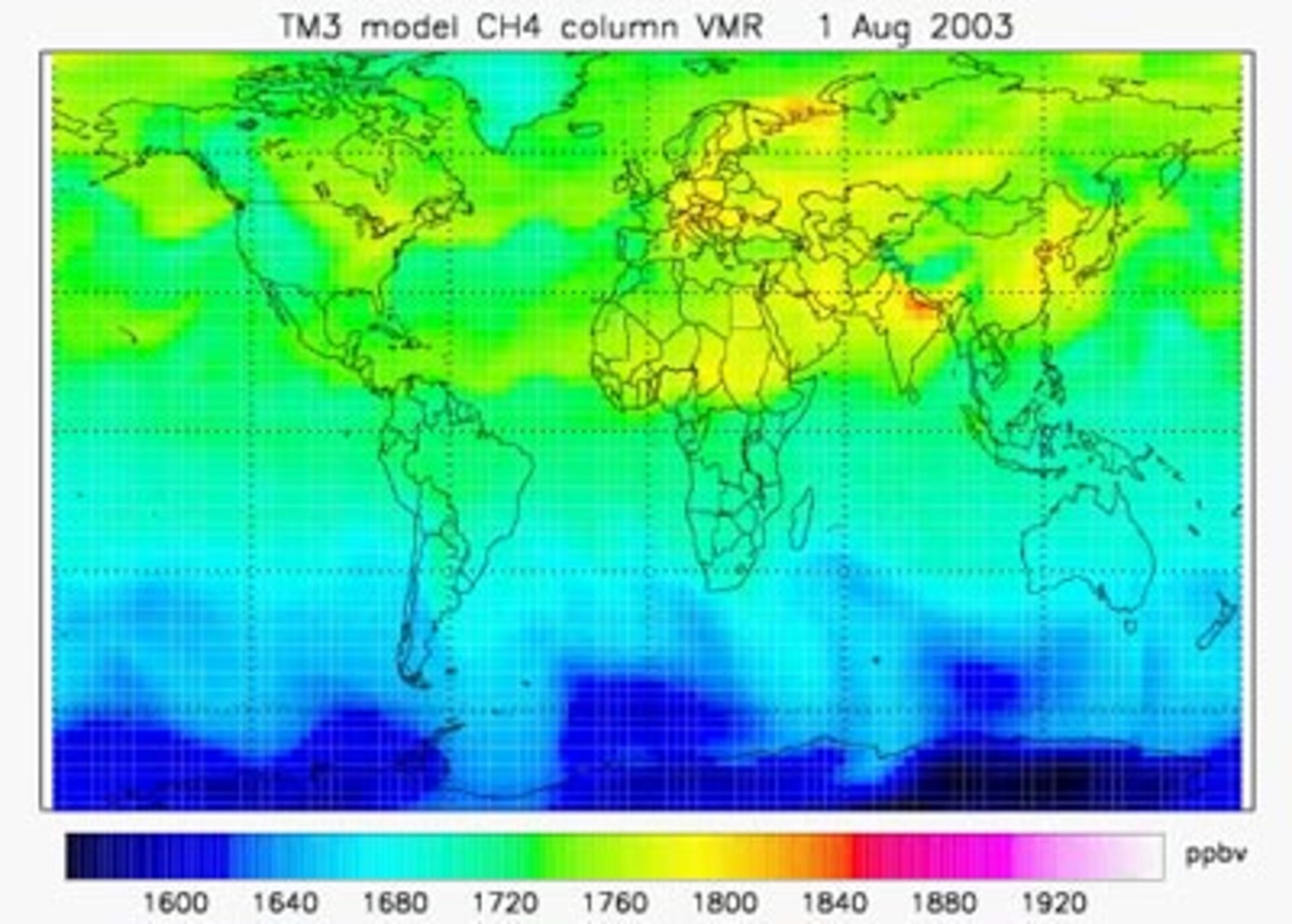 The SCIAMACHY sensor aboard Envisat has performed the first space-based measurements of the global distribution of near-surface methane, one of the most important greenhouse gases. As reported in Thursday's issue of Science Express, the results show larger than expected emissions across tropical land regions.

The report concerns work carried out by the Institute of Environmental Physics (IUP) at the University of Heidelberg in cooperation with the Royal Netherlands Meteorological Institute (KMNI), based on interpretation of methane observations made by the SCanning Imaging Absorption SpectroMeter for Atmospheric ChartographY (SCIAMACHY) instrument, one of ten sensors aboard ESA's Envisat environmental satellite.

A comparison was made between space-based methane observations and model simulations for atmospheric methane for the time period August to November 2003.

"In general the observations agree very well with the model," explains Christian Frankenberg of IUP. "For example, the measurements confirm the occurrence of enhanced methane concentrations over the Ganges plains in India as well as parts of China caused by emissions from rice paddies and domestic ruminants such as cattle.

"However in large parts of the tropics there is a considerable difference. It cannot yet be concluded which source category or combination of source categories is responsible for the discrepancy. Potential candidates include wetlands, biomass burning, termites, ruminants or a hitherto unknown source."

These results are of more than just academic interest, since methane is the second most important 'anthropogenic' or man-made greenhouse gas after carbon dioxide. Methane is among the six greenhouse gases addressed by the Kyoto Protocol that went into operation last month.

Methane traps heat over 21 times more heat per molecule than CO2. The amount of methane in the atmosphere has more than doubled since pre-industrial times, an increase attributed to human activities including energy production and farming.

The overall global source strength of methane is relatively well known," Frankenberg adds. "However the spatial distribution of the emissions, the variations over the year and their division into difference source categories – which is of particular importance for emission monitoring – are still very uncertain. Natural sources of methane are particularly uncertain, and anthropogenic emission estimates rely mostly on socio-economic figures."

SCIAMACHY is a spectrometer that maps the air over a very wide wavelength range, allowing the detection of trace gases, clouds and dust particles throughout the atmosphere.

It uses an innovative technique called Differential Absorption Spectroscopy (DOAS) to find spectral absorption 'fingerprints' of trace gases within sunlight transmitted, reflected or scattered by the Earth's atmosphere or surface in the ultraviolet, visible and near infrared regions. Possessing a 960-kilometre swath SCIAMACHY covers the entire world every six days.

Principal Investigator for the SCIAMACHY instrument is John Burrows, also leader of the University of Bremen Institute of Environmental Physics: "SCIAMACHY was primarily selected for flight because of its ability to measure stratospheric ozone and related species. However it was also proposed to investigate the retrieval of trace constituents from the troposphere, the lowest region of the atmosphere.

"When SCIAMACHY was conceived, many scientists thought it would be impossible to obtain any useful results from the troposphere: there are many issues to be overcome for example the cloud cover, the low reflectivity from the surface, and the fact that stratospheric species lie between the troposphere and the satellite.

"Our calculations showed that it is possible and we are now finding it can be done. The instrument is being used to retrieve the columns of several key tropospheric trace gases - not only methane but also nitrogen dioxide, carbon monoxide and dioxide, sulphur dioxide, formaldehyde, bromine monoxide, water vapour, and ozone are retrieved. In addition SCIAMACHY yields many important cloud and aerosol parameters as well as ocean colour."

Research groups at the Universities of Bremen and Heidelberg, KNMI and the Netherlands National Institute for Space Research (SRON) have been working on the retrieval of methane and carbon dioxide from SCIAMACHY.

This activity is supported by the European Union project EnVisat for Environmental Regulation of GREENhouse gases (EVERGREEN), using Envisat data as a first step towards monitoring greenhouse gas emissions, sinks and sources as required by Kyoto.

"The success and stability of SCIAMACHY so far is a tribute to the instrument builders, operators and data retrievers, and an important step on the way to establishing an operational global observing system for the Earth's atmosphere," adds Burrows. "This is something we need as we enter the new geological age of the Anthropocene, where mankind is the driver of climate change."

SCIAMACHY was preceded by a smaller scale version of the instrument called the Global Ozone Monitoring Experiment (GOME), flown on ESA's ERS-2 in 1995. The newest member of this family of atmospheric spectrometers is called GOME-2. Due to launch aboard the MetOp satellite next year, it will be dedicated to operational ozone monitoring.

Into the future, Professor Burrows and his team have also proposed the Geostationary Scanning Imaging Absorption spectrometer (GeoSCIA) an instrument which would - if selected for flight - provide the high temporal and spatial sampling required for a truly representative picture of tropospheric scales and processes.