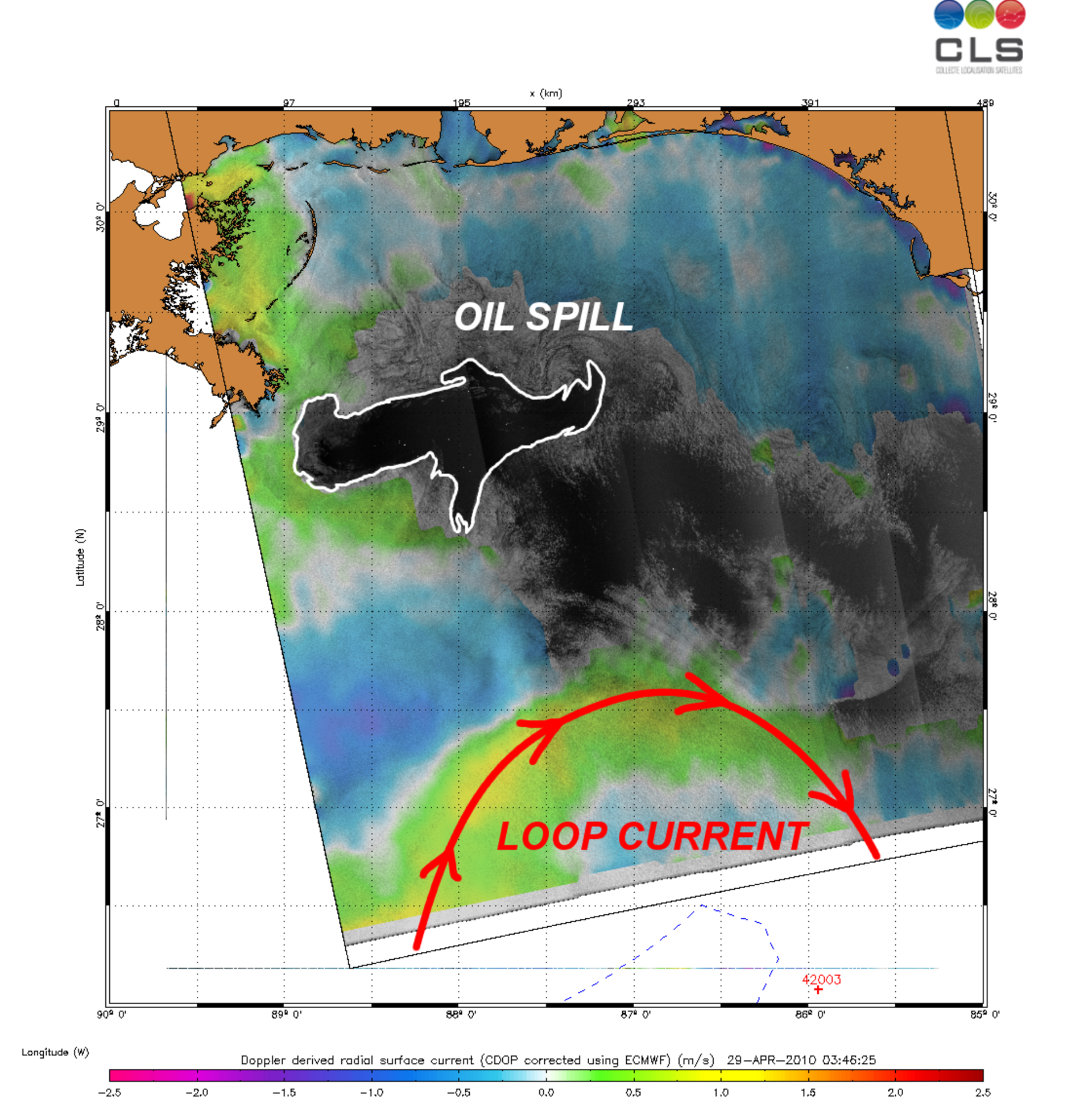 As fears grow that the Loop Current in the Gulf of Mexico could soon catch the oil slick and drag it south towards coral reefs in the Florida Keys, scientists are monitoring the situation closely with ESA’s Envisat radar data.

By combining surface roughness and current flow information with Envisat Advanced Synthetic Aperture Radar (ASAR) data of the spill, SAR image analysts are able to detect the direction in which the spill boundaries can drift.

In these two ASAR images for 29 April and 2 May, advanced processing methods have been performed to display ocean surface roughness variations and Doppler-derived ocean surface radial velocities. Merging this information provides insight into the spatial structure of the spill and its dispersion by the upper ocean turbulent flow.

In the 29 April image, smooth surfaces appear as black patches inside the oil spill and in the very low wind region east of the spill, where the flow analysis is not possible.

As visible in both images, the spill still appears relatively confined around its point of origin and is still north of the Loop Current, a powerful conveyor belt that circulates clockwise around the Gulf toward Florida before joining the powerful Gulf Stream.

An intriguing shape is detected in the 2 May image that seems to follow passively the flow derived from the Doppler measurements.

The fear is that winds could push the oil slick south until it joins the Loop Current, which would carry the oil towards Florida. If that were to happen, the oil could flow into the Gulf Stream and be carried up to the US East Coast.

"As observed, this does not seem to be the case at the moment as no connection between the spill and the intense current presently occurs," said Dr Bertrand Chapron of IFREMER, the French Research Institute for Exploitation of the Sea. "Thanks to systematic Envisat ASAR planning over this area, close monitoring of the situation is ensured as long as there is some wind to contrast the surface roughness."

Dr Chapron and Dr Fabrice Collard of France's CLS (formerly the BOOST Technologies Company) created these products using ASAR in Wide Swath mode. They have been working with radar data for many years and have developed sets of algorithms that allow ASAR data to be processed in near-real time and to produce state-of-the-art ocean parameters. These are made widely available on the SOPRANO ocean products demonstration website developed with ESA.

"The upcoming Sentinel-1 SAR instrument will have an enhanced capability to capture the surface flow information on top of the higher resolution sea surface roughness," Dr Chapron explained. "As demonstrated, these combined products are very promising for strengthening the use of SAR data to help fight oil-spill consequences on coastal zones."