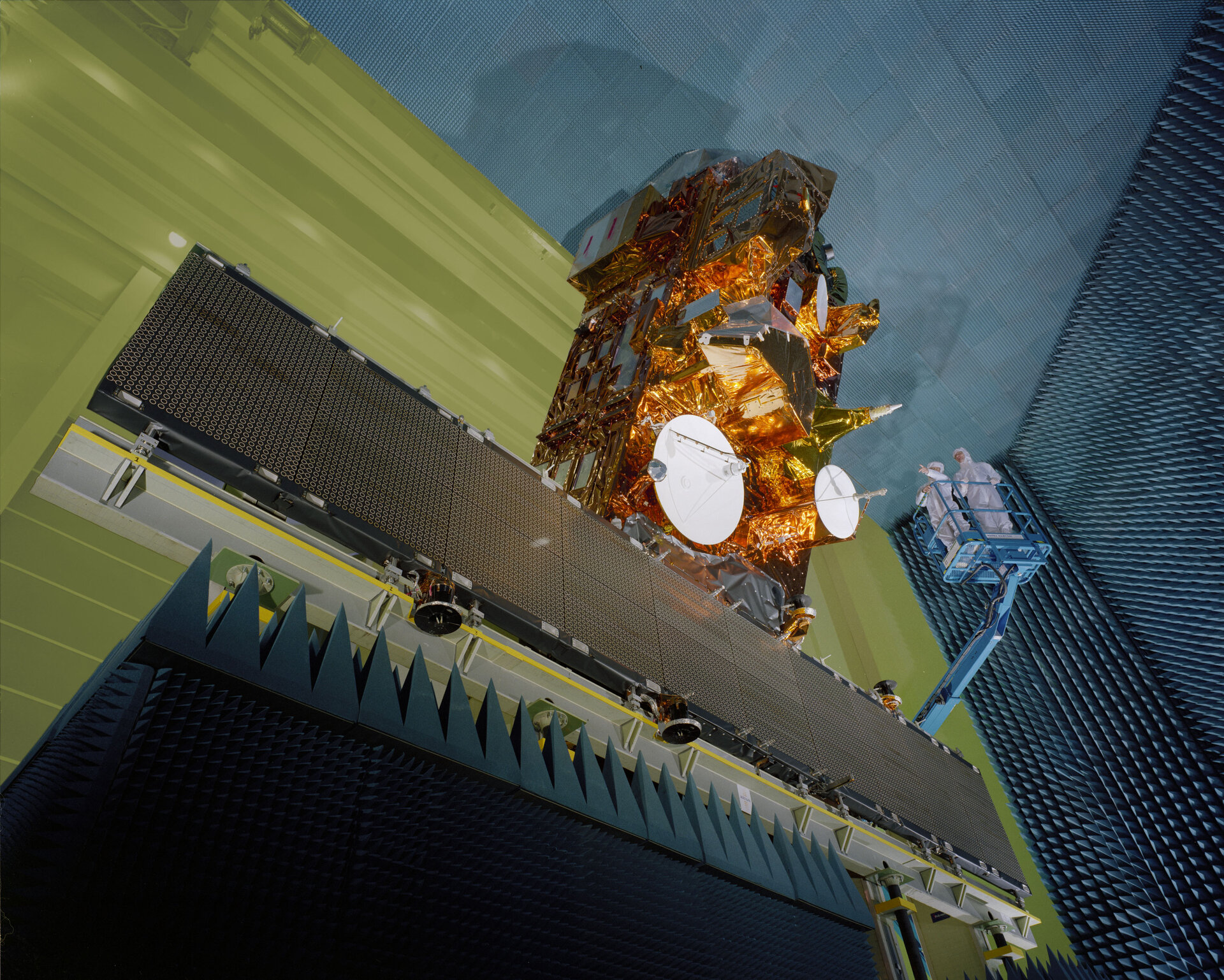 Envisat is the result of nearly ten years of work by ESA and a high profile industrial consortium including Astrium, Alcatel and over 100 other specialist manufacturing companies throughout Europe. The satellite represents Europe's most important contribution to world environment monitoring. The next two months will be the last for Envisat in the safety of its sophisticated clean room and space testing facility at ESTEC, before transportation to Europe's spaceport and launch site in French Guiana.

Weighing in at 8 tonnes and standing over 10 metres tall with a solar array spanning 25 metres, Envisat is the largest earth observation satellite ever built - a European investment topping 2,000 million Euros in total. It will take its rightful position in space later this summer to continue and enhance the vital earth observation work carried out over the last ten years by ESA's ERS-1 and -2 satellites.

Ten highly sophisticated on-board instruments will feed information down to Earth to help the scientific community, governments and environmental groups in their understanding of key issues such as atmosphere and climate change, ozone depletion, global warming and land and sea dynamics. Already, over 700 projects, instigated by many internationally renowned scientists and organisations have been planned, all of which hinge on the successful deployment of Envisat. This has therefore demanded one of the most rigorous and thorough testing procedures ever employed by ESA.

Speaking at the media event, Professor John Burrows of the University of Bremen said that humankind was now in a position to 'radically change the environment", and the question was whether we were going to "do it or bury our heads in the sand." "Envisat will present a chance for humans to recognise their responsibility to the world," he said. Since the service and payload modules were pieced together earlier in 1999, an extensive series of tests have been implemented. These have included thermal environment tests in the space simulator - an environment that simulates the vacuum, solar radiation and extremes of cold and heat in space, acoustic tests to simulate acoustic vibration during the launch and mechanical stress tests in ESA's 'hydraulic shaker'.

More recent tests have included deployment of the solar array to validate its operation following mechanical tests, and deployment of Envisat's sophisticated radar (ASAR) under control of the service module. The Radio Frequency Compatibility tests (RFC) are the last major tests to be carried out before Envisat leaves on its long journey to Kourou. For these, the satellite will be operated with all radars active and the ASAR antenna deployed. "All tests have been successful,"said Derek Todman, Envisat's polar platform project manager, at Astrium, who has been working on Envisat since its conception. I am confident that we have produced a spacecraft for ESA and the European community that will give us a better understanding of our environment and will be of enormous benefit to mankind in the long term," he added.

In April a major transportation schedule over land, sea and air, involving 50 lorries, will carry Envisat's 300 tonnes to its launch site. Envisat will be launched from Kourou in July 2001 on board an Ariane-5. It will make history as the first Ariane-5 launch into sun-synchronous orbit. Following a six-month commissioning phase, Envisat will be able to supply data products via ESA and a number of selected distributors to the scientific community and commercial world. Many of these products will be delivered to the users in less than three hours from observation. Users will place orders via the internet, viewing online the images and products already available.

Envisat will be one of the leading satellites supporting the European Commission initiative for Global Monitoring for Environment & Security (GMES). The satellite has a life expectancy greater than its nominal five-year mission and will hopefully be watching over our planet until the end of the decade.