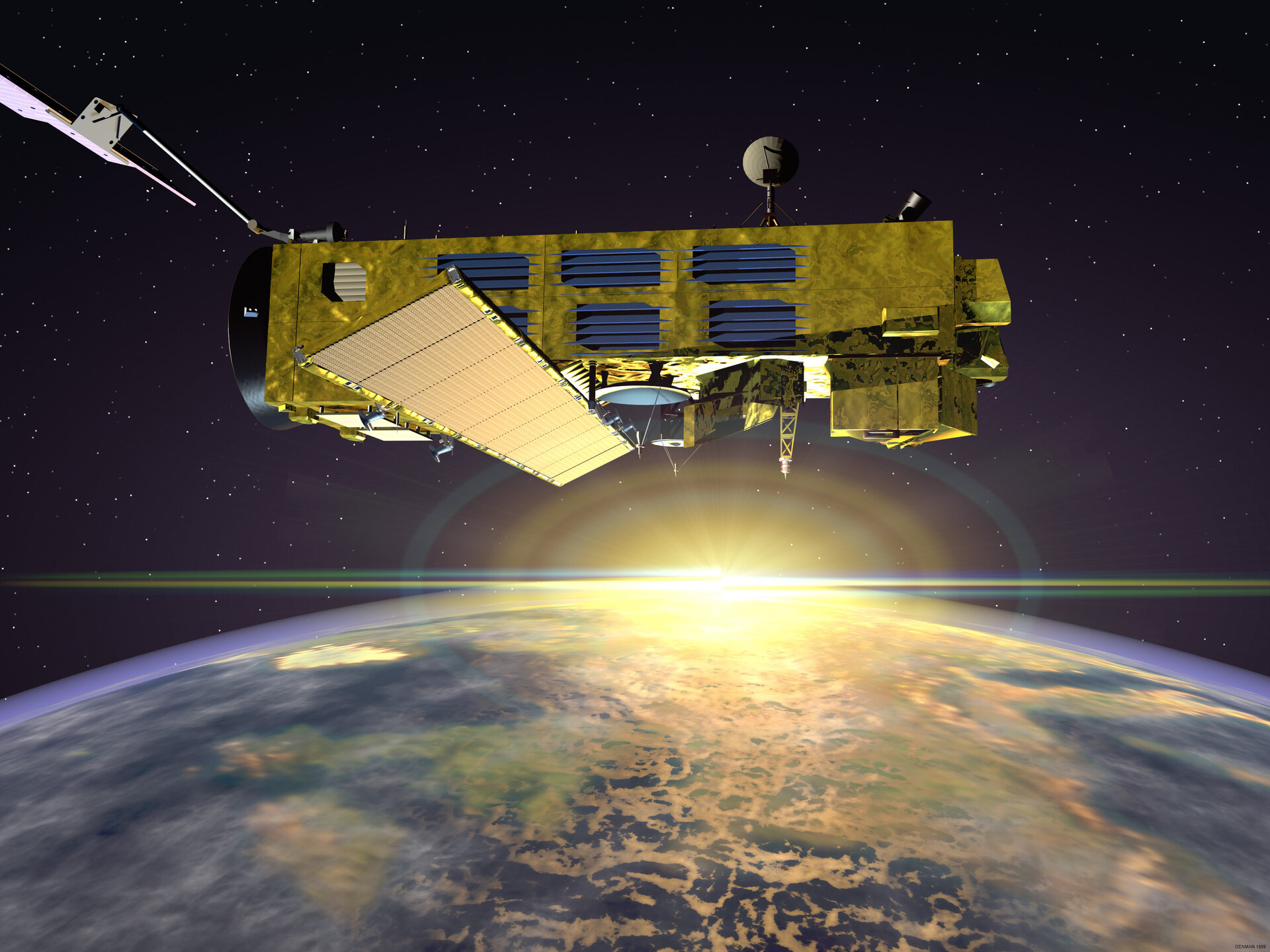 ESA Info 11-2001. Early in 2002 an Ariane-5 rocket will launch the largest and most advanced Earth observation satellite ever built in Europe from the European Spaceport at Kourou in French Guiana. From an altitude of 800 kilometres Envisat will deliver images and data that will help us better understand and more effectively protect the Earth.

This gigantic Earth observation satellite, the size of an articulated lorry, was developed under the supervision of ESA experts from the European space research and technology centre (ESTEC) in Noordwijk, the Netherlands, at a cost of 2.3 billion euros. Programme Manager Jacques Louet called the satellite, which has more measuring instruments on board than any other to date, "a huge challenge for ESA and Europe".

In 1988 the "Polar Platform" project, as it was then called, was agreed upon; at the beginning of the 1990s the satellite, which every hour will gather as much data as can be stored on a dozen PC hard disks, became ENVISAT (ENVIronmental SATellite). The spacecraft can monitor and show the status of the Earth, including the complex life cycle of algae blooms, or give advance warning of natural catastrophes. Envisat, with its 14 x 4.5 m solar array which delivers 6.6 kilowatts of electrical power, was ferried to its launch pad in Kourou by a Russian Antonov and two Boeing 707 freighters.

The space laboratory will send its gigabytes of data to ESA's ground station in Kiruna, Sweden, the Italian ground station in Fucino or the geostationary Artemis satellite orbiting the Earth at a distance of 36000 km. The 'super satellite' will register the tiniest surface movement and give advance warning of floods, mud and snow avalanches and storms; it will observe polar ice and the level of the oceans; recognise El Niño before it builds its treacherous waves in the Pacific ocean; measure the ozone layer; identify bush and forests fires and pinpoint water sources in deserts.

Michael Rast, a scientist in ESA's Directorate of Earth Observation, calls Envisat "our Cassandra in Space". The German geologist has always known, long before the Climate Conference in Rio and the Kyoto Protocol, that politicians are skating on thin ice when they argue about greenhouse gas emissions. Envisat delivers facts. Rast quotes a report from the Intergovernmental Panel for Climate Change (IPCC): "Mankind does not understand the processes underlying our environment well enough. More measurements and more research are needed: this can only be achieved on the basis of quality data and quantitative analysis".

Envisat is controlled via Kiruna, and when needed, its position is corrected by radio signals from the operations centre at ESOC, ESA's Control Centre, in Darmstadt. Envisat circles the Earth at 100-minute intervals, 14 times a day, returning in a 35-day cycle to the same orbit, and in 3 days draws a complete map of the world. Rast states that, "we want to retain an overview, for example, of ocean water quality, of greenhouse gases or temperature distribution in the atmosphere, and to be able to establish the extent to which tropical forests are being cut down".

The ten instruments on board Envisat, more than on any other satellite, cover a wide spectrum of phenomena, delivering evidence of the interactions between the atmosphere, the ocean and the surface of the earth.

The Germans are particularly proud of SCIAMACHY on board Envisat: the SCanning and Imaging Absorption spectroMeter for Atmospheric CartograpHY searches the atmosphere for trace gases, ozone and similar substances as well as clouds and dust particles, confirms the total amount of the gases and indicates the different altitudes. SCIAMACHY shows the consequences of forest fires, industrial emissions, arctic haze, dust storms and volcanic eruptions. SCIAMACHY was provided by the German, Dutch and Belgian national space entities and built by space companies from those countries. One of the most sophisticated sensors on board, it will observe and measure the migration of greenhouse gases through the atmosphere.

Europe's eyes in space also measures the plankton movements in the world's seas in order to establish - as a complement to the knowledge about the biological productivity of the oceans - a basis for setting fishing quotas. Michael Rast states "We can prevent overfishing of the seas because we can guide the fleets". And furthermore: "There are poisonous algae, toxic blooms, that have already decimated ecosystems. Once their presence is identified from space, poisonous algae can be prevented from spreading".

Envisat should achieve even more: "If we can establish how much carbon is absorbed by algae, we will be better able to establish how much greenhouse gas the environment can actually tolerate, which will assist the prediction of climate development".

Envisat can also take stock of the Earth's resources. For Dr Michael Rast: "We will be able to trace the smallest changes to the Earth's surface better than from the ground". Early warnings of volcanic eruptions and earthquakes are slowly becoming reality. Data from Envisat will certainly be used in vulcanology and seismology. Michael Rast believes "that in the future we will be able to at least support earthquake damage estimates and possibly predictions".

The German scientist considers the satellite "a pillar of the European space programme". He hopes that "with Envisat we will gain enormous insight into the situation of the environment and climatic processes so that in future we will be able, with this better understanding of the relationships, to target specific problem areas with smaller satellites". He admits that it is a great risk to pack so much know-how into just one satellite, "However, if we want to have a comprehensive understanding, we must follow this path".

This Information Note is the first of a series devoted to the Envisat programme and its applications.