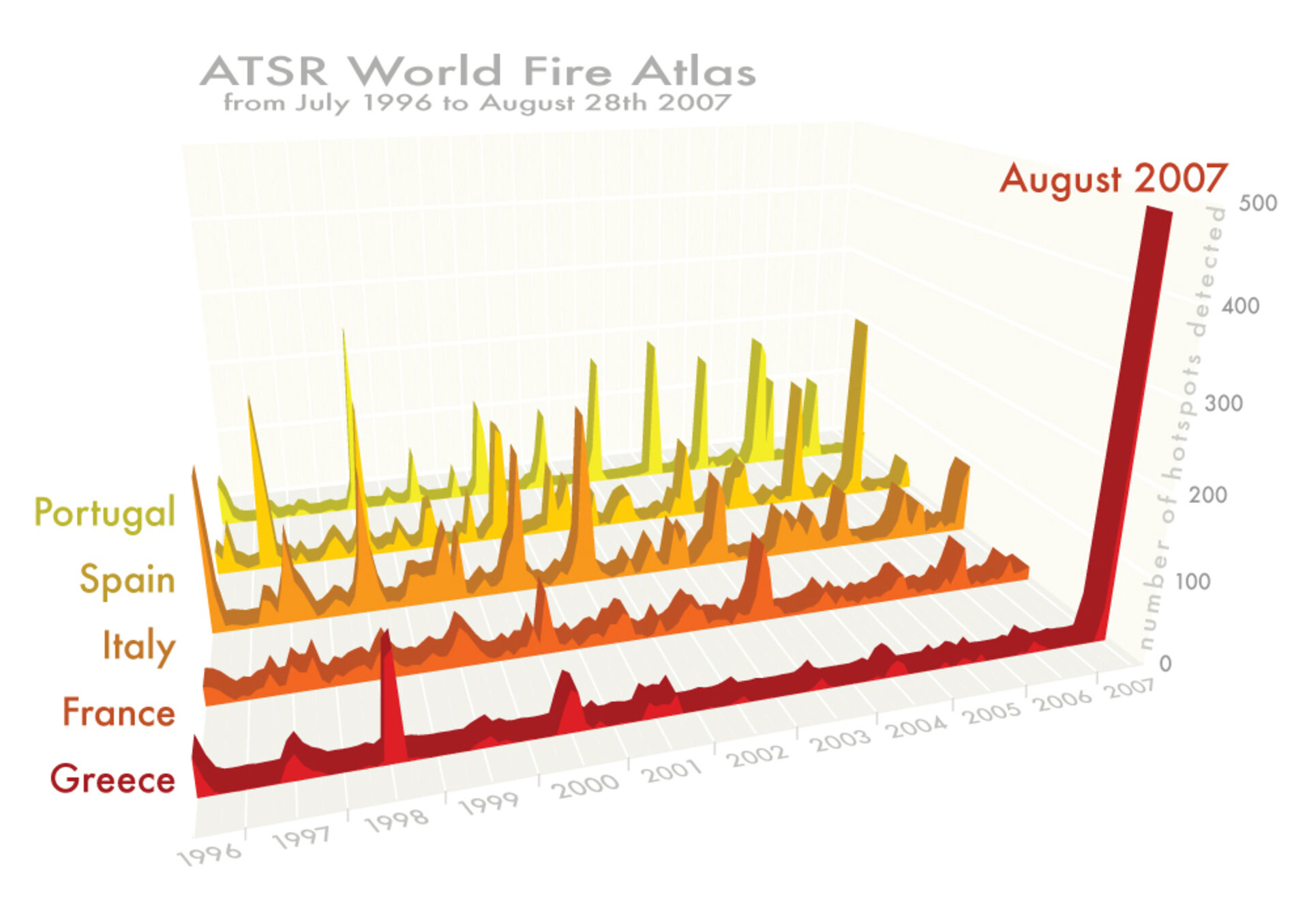 Greece has experienced more wildfire activity this August than other European countries have over the last decade, according to data from ESA satellites. The country is currently battling an outbreak of blazes, which began last Thursday, that have spread across the country killing more than 60 people.

The ATSR World Fire Atlas is the longest worldwide fire atlas available. Even if the atlas is not supposed to pick up all fires due to satellite overpass constraints and cloud coverage, it is statistically representative from one month to the other and from one year to the other.

Working like thermometers in the sky, the sensors measure thermal infrared radiation to take the temperature of Earth's land surfaces. Temperatures exceeding 308ºK at night are classed as burning fires. Data gathered from July 1996 to 28 August 2007 was used to plot the number of fires occurring monthly and show Greece has had four times the number of fires this August compared to its July and August 1998 records.

Weather conditions, including record summer temperatures and hot dry winds, in 2007 made parts of the Mediterranean – including Greece and southern Italy – a tinderbox, the United Nations Food and Agriculture Organization said.

The ATSR World Fire Atlas provides data approximately six hours after acquisition. All available satellite passes are processed to create the ATSR World Fire Atlas. In addition to maps, the time, date, longitude and latitude of the hot spots are provided. The data are used for research in atmospheric chemistry, land use change, global change ecology, fire prevention and management and meteorology.

Quantifying fires is important for the ongoing study of climate because they have a significant impact on global atmospheric pollution, with biomass burning contributing to the global budgets of greenhouse gases, like carbon dioxide. The 1998 El Niño, for example, helped encourage fires across Borneo which emitted up to 2.5 billion tonnes of carbon into the atmosphere, equivalent to Europe's entire carbon emissions that year.

One of the biggest problems during and after fires is obtaining an overall view of the damage and its evolution. With fires visible from space, Earth Observation is also being used to detect and monitor the active spots over affected areas. In October 2000, ESA and the French space agency (CNES) initiated the International Charter Space and Major Disasters, a joint initiative with now ten members, aiming at rapidly tasking Earth Observation satellites and delivering spacemaps to users concerned with emergency response, such as civil protection authorities, anywhere in the world.

Such a capacity can help monitor fire hazard by integrating imagery into geographic information systems used by decision makers and actors in the field. On 29 August, the National Cadastral Organisation of Greece requested support from the International Charter in response to the fire events affecting the country.