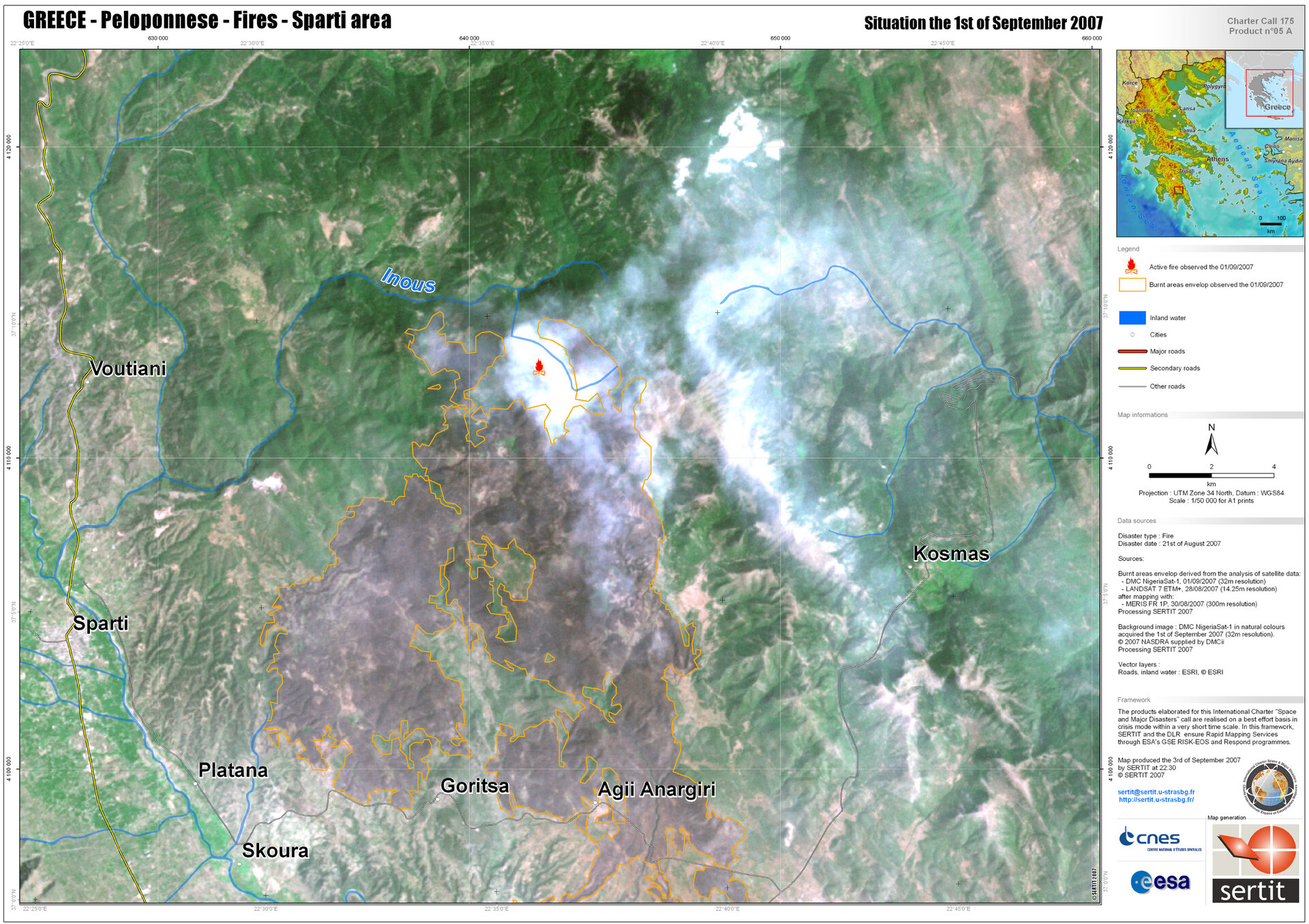 Cleanup and rebuilding teams responding to the devastation across Greece caused by this summer’s deadly fires are getting help from space. A series of crisis map products based on satellite acquisitions of affected areas are being provided to aid damage assessment efforts following the activation of the International Charter on Space and Major Disasters.

More than 60 people were killed and thousands left homeless in the worst forest fires to hit Greece in decades. According to data from ESA’s ERS-2 and Envisat satellites, which continuously survey fires burning across the Earth’s surface with onboard sensors, Greece experienced more wildfire activity this August than other European countries experienced over the last decade.

In an effort to aid authorities responding to disasters such as this, ESA and other national space agencies established the International Charter on Space and Major Disasters in 2000 to provide rush access to a broad range of satellite data.

The Charter, activated by the Department of Emergency Planning and Response of the Greek Civil Protection Agency, processed this request and recruited the German Aerospace Centre (DLR) and the Strasbourg-based rapid mapping specialist company (SERTIT) to produce the maps using satellite images provided by the space agencies.

These maps were used for fighting active fires across Greece, particularly those in the region of the Parnonas Mountains, which rise to almost 2000 metres on the eastern side of the Peloponnese peninsula that makes up southern Greece.

"These map products proved to be very helpful for managing the severe fires that Greece suffered," Fivos Theodorou, Director for Emergency Planning and Response of the General Secretariat for Civil Protection, said. "The General Secretariat for Civil Protection intends to use these maps for post-fire management purposes, such as burnt area mapping, reforestation and the construction of flood prevention projects and supply them to the Greek authorities, such as the Greek Forest Service, responsible for consequence management."

DLR performed this service under the scope of the Risk-EOS service network. Risk-EOS, part of ESA's initial Services Element of Global Monitoring for Environment and Security (GMES), offers EO-based operational services for rapid mapping of major disasters as well as other geo-information services to support risk management of hazards such as floods and forest fires.

The Risk EOS service network and its Greek partner, National Observatory of Athens (NOA), are now working closely with Greek authorities to consolidate further the work done by the Charter on the affected areas.

Other satellites used to produce the maps include NASA’s Landsat operated by USGS, Nigeria-Sat-1 of the DMC satellite constellation, the SAC-C (an international cooperative mission between NASA and the Argentine Commission on Space Activities (CONAE), CNES, the Brazilian Space Agency, the Danish Space Research Institute and the Italian Space Agency), CNES’s SPOT satellite and Taiwan’s FORMOSAT satellite.

To learn more about the Charter, including past and recent activations, please visit the Charter website.