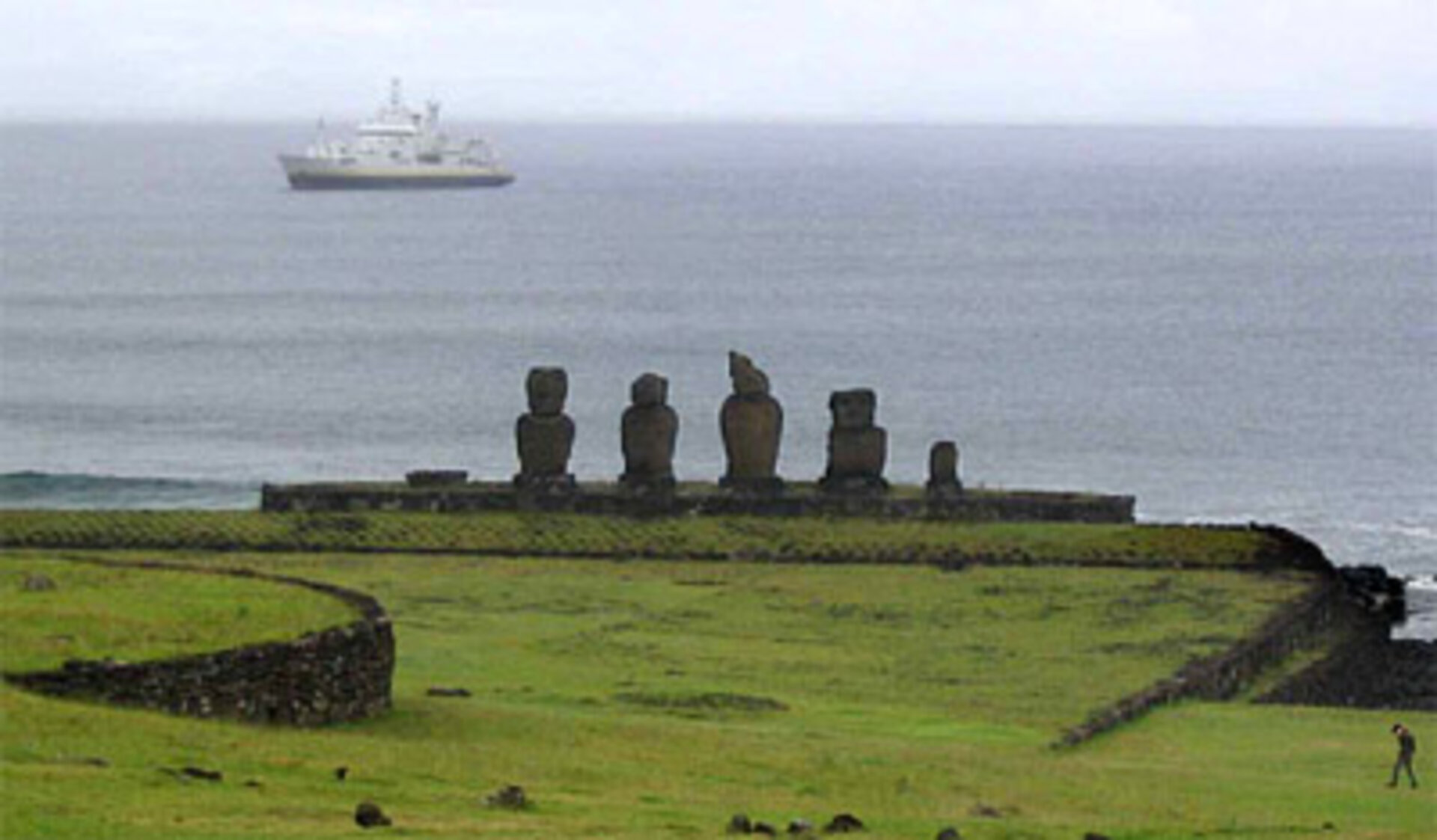 There is a desert in the heart of the South Pacific. Surrounding Easter Island is the purest and bluest seawater on Earth, almost empty of the microscopic phytoplankton at the base of the marine food web. French vessel L'Atalante recently completed a research cruise through this region, its day-to-day route guided by ocean colour satellites.

Viewed from orbit, the colour of the global ocean is not constant but varies considerably. Specially built satellite sensors perceive subtle gradients in water hues as a guide to its contents, especially chlorophyll pigments of phytoplankton species, tiny unicellular photosynthesising algae resembling 'grass of the sea'.

Ocean colour observations show considerable variations across the South Pacific: one vast blue spot is roughly centred on Easter Island, covering an area equivalent to the Mediterranean Sea. Standing like an oasis in these blue desert waters is the chlorophyll-rich zone around the Marquises Archipelago, the precise reason for its fertility still uncertain.

And just off the west coast of Chile is an upwelling of cold, nutrient-high water that supports extremely dense chlorophyll concentrations and one of the most important fisheries on Earth.

Setting off from Tahiti in mid October, the BIOSOPE (Biogeochemistry and Optics South Pacific Experiment) research cruise recently traversed this entire area, reaching Concepcion in Chile in mid-December. During two months aboard L'Atalante, a 45-strong international team of researchers investigated the determining factors of ocean colour.

"The region's wide variety of ocean colour and trophic regimes – in other words, biological activities initially triggered by phytoplankton - is the reason we decided to carry out our study here," explained project scientist Hervé Claustre of the Observatoire Océanologique de Villefranche, present on the cruise alongside colleague Andre Morel.

"Ocean colour satellite imagery has been of great help when planning the cruise, and throughout the field campaign. The information allowed the course of the ship to be adjusted according to the desired chlorophyll concentration, and was especially useful when the ship sailed within the complex and patchy zone off Chile."

The expedition used daily ocean colour composites of ESA's Medium Resolution Imaging Spectrometer (MERIS) instrument aboard Envisat together with NASA's Moderate Resolution Imaging Spectroradiometer (MODIS). The composites were produced by France-based ACRI in the context of Coastwatch, an ESA-supported information service for coastal environments (part of the Global Monitoring for Environment and Security - GMES - Services Element).

The researchers also directly measured the bio-optical properties of water down to a variety of depths, along with atmospheric conditions, timing their observations with overpasses of ocean colour satellites in support of calibration and validation activities – satellite imagery can only be relied upon if its findings are regularly gauged against in-situ conditions. And because most of the signal received by satellites above the ocean actually comes from the atmosphere, characterising local atmospheric conditions helps to improve data quality.

And by better determining the relationship between chlorophyll and marine optical properties, BIOSOPE results promise to improve the quality of the algorithms applied to raw satellites to produce final ocean colour products. Now the cruise has ended, water and phytoplankton samples frozen in liquid nitrogen have been distributed for more detailed study by international laboratories, in particular to carry out an intercomparison exercise regarding the analysis of the various phytoplanktonic pigments.

From Tahiti to Chile

Setting off from Tahiti in French Polynesia on October 22, L'Atalante travelled east towards the Marquises Archipelago, whose western waters exhibit extremely active marine life, possibly due to an enrichment of iron from the islands. However the waters to its east have a similar high nutrient level but low chlorophyll levels – the hope is that detailed analysis of samples gathered here can resolve this apparent paradox.

Proceeding east in early November led to an area with some of the weakest concentrations of phytoplankton on the planet. Space-based observations show that this vast blue water area centred on Easter Island has a longitudinal extension of several thousand kilometres. The observations agree with upper ocean circulation patterns, characterised by a large anti-cyclonic gyre that rotates counterclockwise. Within this gyre, surface chlorophyll concentrations are minimal, less than 0.03 mg m-3, although a deep chlorophyll maximum does develop in these waters as deep as 180 to 200 metres.

Accordingly its striking blue colour was observed while sailing through it, due largely to the water molecules themselves. The presence of phytoplankton, through the influence of chlorophyll and other pigments, modifies this initial colour towards blue-green, then green and finally brownish for increasing chlorophyll concentration.

Phytoplankton play a vital role in the life of the ocean, Claustre explained: "These vegetal organisms form the first link in the food web and are the first participant in the oceanic carbon cycle. Employing chlorophyll for photosynthesis, they produce the initial organic material from inorganic carbon dioxide, then becoming food for small grazing organisms called zooplankton, which in turn are prey to fish and even whales. They also create the first reserve of particulate matter from which all organic and inorganic debris originate."

However these waters – isolated from any continents, too far too receive nutritive elements via wind or rain - are 'super-oligotrophic', with a poor standing algal stock, a reduced grazing on it, and finally a minimal production of debris. This means they are among the clearest waters in the world ocean, with high reflectance in the shortest wavelength of the spectrum, including the near ultraviolet.

Some of the answers that BIOSOPE seeks to answer are how the scarce phytoplankton population has adapted to this nutrient depleted environment at various depths, whether unknown ultraviolet-adapted species inhabit these waters, and the optical properties of this naturally very pure water.

Then, since December 6 to the end of its cruise, L'Atalante sailed in the rich, cold and green waters of the Chilean 'upwelling'. This is a phenomenon caused by the Trade Winds, which divert the warm sea surface layer off the South American coast, leaving cold and nutrient-rich waters to well up in their place. The result is a chlorophyll concentration exceeding one mg–3, sometimes 10 mg–3. The lights of the vessel attracted a large number of squid by night – the largest exceeding 1.43 metres – and a large variety of birds, including petrels, puffins, and albatrosses, and even a pelican.