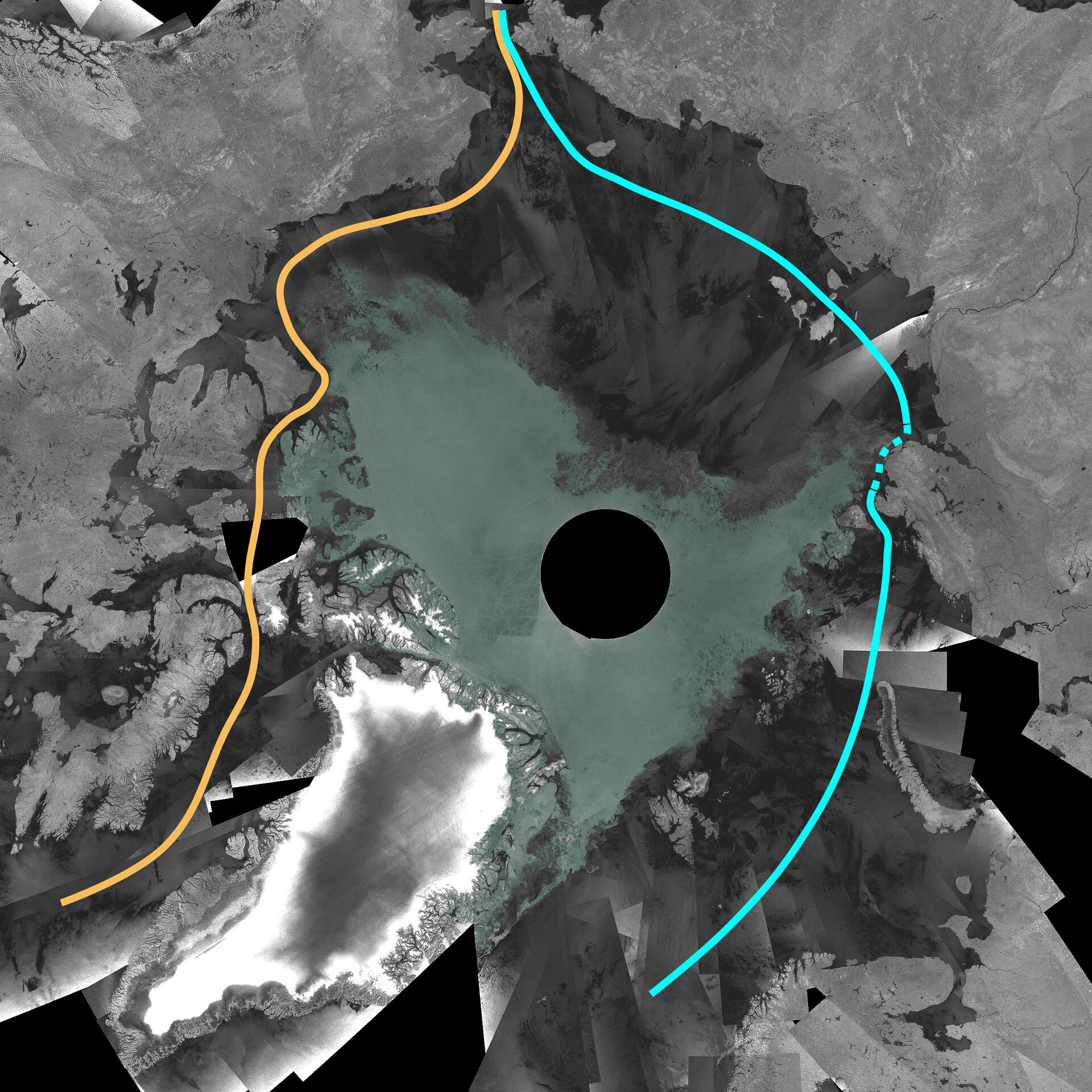 The area covered by sea ice in the Arctic has shrunk to its lowest level this week since satellite measurements began nearly 30 years ago, opening up the Northwest Passage – a long-sought short cut between Europe and Asia that has been historically impassable.

In the mosaic image above, created from nearly 200 images acquired in early September 2007 by the Advanced Synthetic Aperture Radar (ASAR) instrument aboard ESA’s Envisat satellite, the dark gray colour represents the ice-free areas while green represents areas with sea ice.

Leif Toudal Pedersen from the Danish National Space Centre said: "We have seen the ice-covered area drop to just around 3 million sq km which is about 1 million sq km less than the previous minima of 2005 and 2006. There has been a reduction of the ice cover over the last 10 years of about 100 000 sq km per year on average, so a drop of 1 million sq km in just one year is extreme.

"The strong reduction in just one year certainly raises flags that the ice (in summer) may disappear much sooner than expected and that we urgently need to understand better the processes involved."

Arctic sea ice naturally extends its surface coverage each northern winter and recedes each northern summer, but the rate of overall loss since 1978 when satellite records began has accelerated.

The most direct route of the Northwest Passage (highlighted in the top mosaic by an orange line) across northern Canada is shown fully navigable, while the Northeast Passage (blue line) along the Siberian coast remains only partially blocked. To date, the Northwest Passage has been predicted to remain closed even during reduced ice cover by multi-year ice pack – sea ice that survives one or more summers. However, according to Pedersen, this year’s extreme event has shown the passage may well open sooner than expected.

The previous record low was in 2005 when the Arctic area covered by sea ice was just 4 million sq km. Even then, the most direct Northwest Passage did not fully open.

The Polar Regions are very sensitive indicators of climate change. The UN’s Intergovernmental Panel on Climate Change showed these regions are highly vulnerable to rising temperatures and predicted the Arctic would be virtually ice free by the summer of 2070. Still other scientists predict it could become ice free as early as 2040 due to rising temperatures and sea ice decline.

Because sea ice has a bright surface, the majority of solar energy that hits it is reflected back into space. When sea ice melts, the dark-coloured ocean surface is exposed. Solar energy is then absorbed rather than reflected, so the oceans get warmer and temperatures rise, making it difficult for new ice to form.

The Arctic is one of Earth’s most inaccessible areas, so obtaining measurements of sea ice was difficult before the advent of satellites. For more than 20 years, ESA has been providing satellite data to the cryosphere communities. Currently, ESA is contributing to the International Polar Year (IPY) – a large worldwide science programme focused on the Arctic and Antarctic.

Since 2006, ESA has supported Polar View, a satellite remote-sensing programme funded through the Earthwatch GMES Service Element (GSE) that focuses on the Arctic and the Antarctic.

In 2009, ESA will make another significant contribution to cryosphere research with the launch of CryoSat-2. The observations made over the three-year lifetime of the mission will provide conclusive evidence on the rates at which ice cover is diminishing.