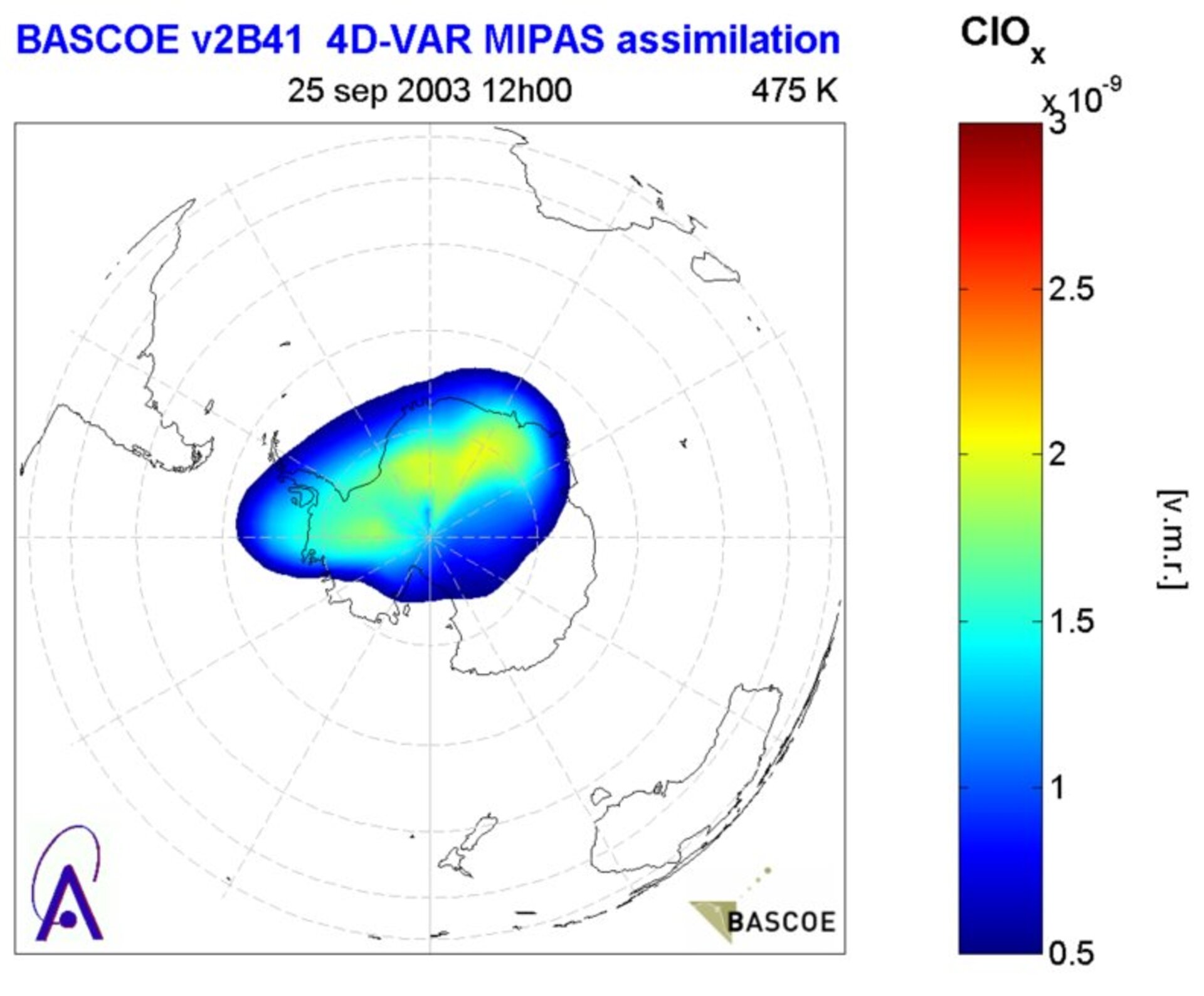 The latest ESA Earth Observation data show that reports of the demise of the ozone hole appearing annually above Antarctica have been greatly exaggerated.

The ozone hole is normally at its largest in September, but 2002 saw it at its smallest extent for more than a decade: 40% down on previous years. And a year ago yesterday ongoing satellite measurements of ozone - gathered by the Royal Dutch Meteorological Institute (KNMI) from the Global Ozone Monitoring Experiment (GOME) instrument on ESA’s satellite - showed it splitting in two.

“Using GOME we have gathered global stratospheric ozone data over the last eight years,” said Henk Eskes of KNMI. “And last year we were actually able to accurately predict the split a few days before it happened, as we were operating an ozone forecasting service.”

There was speculation that last year’s shrinking hole showed the ozone layer was recovering from damage caused by man-made chemicals including chlorofluorocarbons (CFCs) - in the past used in aerosol cans and refrigerators. But the bad news is that this year’s ozone hole looks much more like the 2000 than the 2002 version.

The latest ozone measurements acquired yesterday by the Michelson Interferometer for Passive Atmospheric Sounding (MIPAS) instrument aboard Envisat - ESA’s latest Earth Observation spacecraft – show this year’s ozone hole is in no danger of splitting this time, and, with an area of 26 million sq km, is almost as big as the 2000 ozone hole. The Belgian Institute for Space Aeronomy (BIRA-IASB) generated this value-adding MIPAS data based on level 2 products provided by ESA.

MIPAS is a German-built instrument that works by measuring infrared emissions from the Earth’s 'limb' – the band of atmosphere between planetary surface and empty space, as observed from behind Envisat. Working through day and night, MIPAS can map the atmospheric concentrations of more than 20 trace gases, including ozone as well as the pollutants that attack it. This makes the instrument invaluable in the study of atmospheric chemistry.

Stratospheric ozone absorbs up to 98% of the Sun’s harmful ultraviolet light. But human production of CFCs and other pollutants has led to thinning of this protective ozone layer. The discovery of this fact in the 1980s came as a shock.

“Nobody expected such an outcome,” said Eskes. “The very reason these classes of compounds were used by industry was because they were chemically inert – they did not react with other materials. Now we have learned to expect surprises, and we monitor accordingly.”

What was not anticipated was that when these compounds reach a sufficiently high altitude they are split apart by contact with high-energy UV light, releasing more reactive chemicals – chief among them chlorine. In the presence of high-altitude clouds in the cold air above the South Pole these reactive chemicals break ozone down to form oxygen molecules.

“The result of this discovery was the international Montreal Protocol, which has been very successful,” said Eskes. “Emissions of ozone-destroying compounds have been reduced and their concentration in the atmosphere has stabilised. But they are very long-lived and will stay in place for a long time.”

A single molecule of chlorine can degrade more than 100,000 molecules of ozone. And there are large amounts of them in the air – largely stored within intermediate and inactive 'reservoir' compounds, but activated by particular meteorological conditions, notably those found above the South Pole in winter.

Current data from MIPAS do show a high level of chlorine activation over Antarctica. The ozone layer is most prone to thinning here because the extreme low temperatures of the long polar night form ice clouds containing chlorine compounds. Then sunshine from the polar spring splits the chlorine into ultra-reactive radicals, which depletes the ozone.

Small ozone holes have also been known to form over the Arctic, but meteorological conditions there prevent the stratospheric temperature dropping enough to cause thinning on an Antarctic scale. The small size of the 2002 Antarctic ozone hole was due to the same reason – unusual wind patterns and warm weather prevented more ice cloud formation. But this year’s measurements show there is little room for complacency on this issue.

“Since the end of the 1990s, there is experimental evidence that the total chlorine loading in the stratosphere is decreasing, but this is a slow process,” observed Dominique Fonteyn of BIRA-IASB. “Superimposed on this is the meteorological variability which this year still allows sufficient chlorine activation over a large area and for a longer period than last year.”

MIPAS will continue to monitor the condition of the ozone layer for the life of the Envisat spacecraft, together with the spacecraft’s other atmospheric instruments: Global Ozone Monitoring by Occultation of Stars (GOMOS) and Scanning Imaging Absorption Spectrometer for Atmospheric Cartography (SCIAMACHY). KNMI has plans to resume its ozone forecasting service using the latter instrument.

And in 2005 the first of the three-spacecraft MetOp operational meteorology system will be launched into polar orbit. MetOp will include a next-generation ozone-monitoring instrument called GOME-2, intended to guarantee continuity of observation of this vital environmental factor well into the following decade.