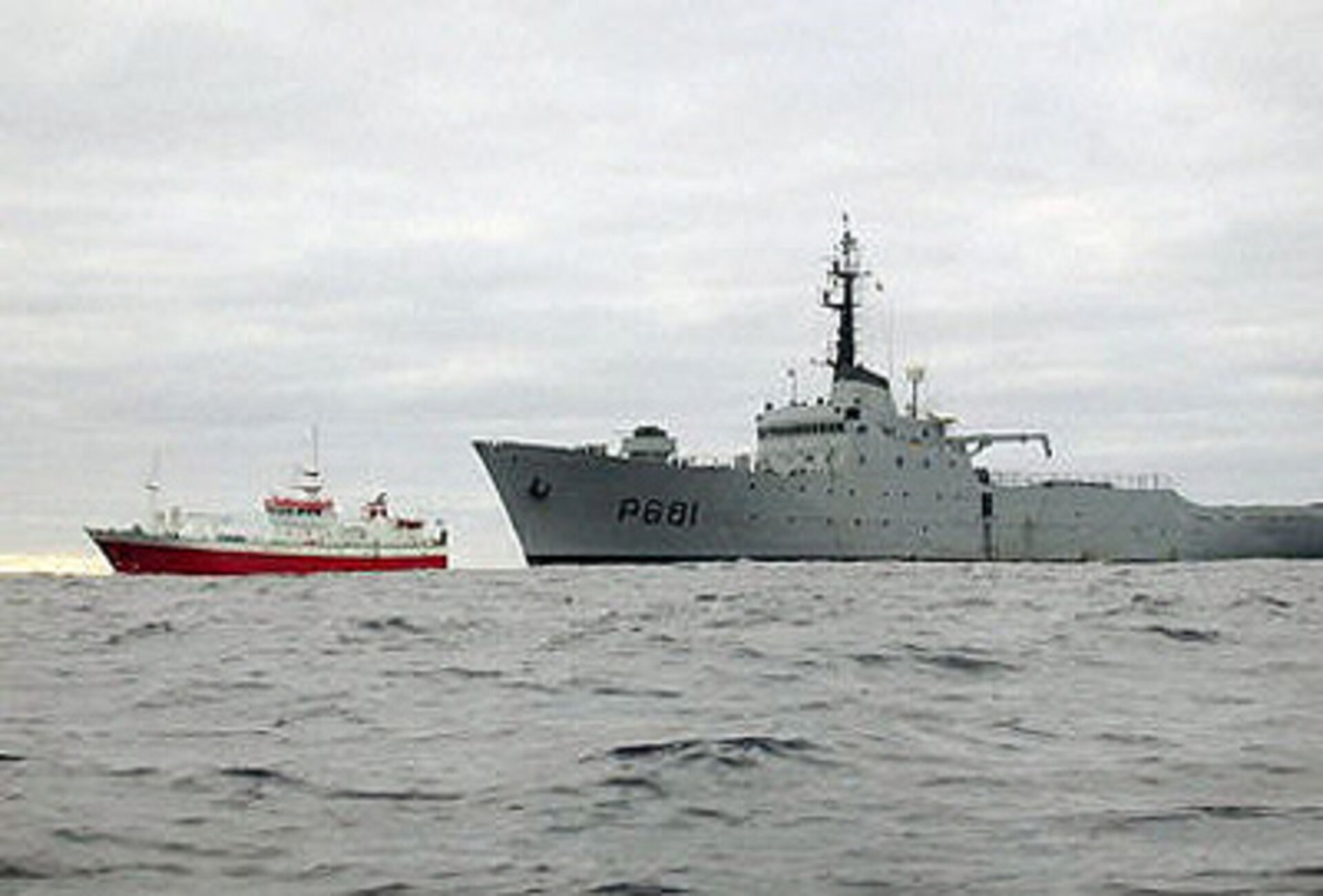 A satellite surveillance zone within the southern Indian Ocean is helping protect the endangered Patagonian toothfish from pirate fishing vessels.

Perched between Africa, India, Australia and Antarctica, the windswept French territory of the Kerguelen Islands is one of the remotest places on Earth. Even so, fishing vessels are lured there by the prospect of catching one valuable species found in its surrounding waters – the Patagonian toothfish, also known as Chilean sea bass, or else 'white gold' for the high prices it commands on the black market.

However a radar satellite surveillance system based on Envisat and Radarsat-1 imagery has cut the number of illegal fishing incursions in the vicinity of Kerguelen Island by nine-tenths. Run for the benefit of the French maritime authorities by the firm CLS (Collecte, Localisation Satellites), a subsidiary of the French space agency CNES, the system is up and running at a time when overfishing has left the 40-million-year-old Patagonian toothfish species on the verge of extinction.

Also found off South America, the toothfish has evolved anti-freeze components in its blood, making it one of a small number of species to colonise the sub-Antarctic waters of the Southern Ocean, playing an important role in the ecosystem there, providing sustenance to whales and seals.

Toothfish dwell in deep waters on the edge of coastal shelves and sea mounts. Individual toothfish can live for 40 years but take a decade to reach adulthood: their slow-maturing character makes them especially vulnerable to overfishing.

As toothfish numbers have crashed in heavily fished waters off Chile and Argentina, fishermen are increasingly drawn to Southern Ocean fisheries. However strict quotas have been set to preserve numbers. France maintains an economic exclusion zone (EEZ) extending 360 kilometres offshore from Kerguelen Island, along with its nearby Crozet and St-Paul Amsterdam territories.

Only French-owned ships are authorised to fish in the combined French Southern and Antarctic Territories EEZ, mostly working out of the French territory of Réunion Island, around 3000 kilometres west of Kerguelen. However this region has proved increasingly popular with pirate vessels intent on defying the law.

Réunion is the second largest producer of Patagonian toothfish behind Chile. So the toothfish is very important to it, earning in the region of 40 to 60 million euros for its economy annually. However in recent years the toothfish has fallen prey to illegal uncontrolled fishing. It is estimated that pirate vessels have been fishing up to 26 000 tonnes a year – nearly four times the legal quota.

In the last few years authorities have introduced measures to limit illegal fishing in the EEZ, defend France's economic interests, protect ecosystems and stamp French sovereignty on their territorial waters. A surveillance system using French naval vessels has achieved some success, however the number of vessels fishing illegally continued to rise, and they proved adept at slipping through the surveillance net.

The EEZ totals nearby one million square kilometres of ocean – too great an area for naval vessels to police effectively. So the French maritime authority turned to satellite surveillance – employing ESA's Envisat satellite in conjunction with Canada's Radarsat-1.

The radar sensors aboard these spacecraft can monitor the region during both day and night and in all weathers, including cloudy conditions. The metal corners of ships make good radar reflectors, sending back distinctive signal echoes. Using the two spacecraft together means updated images become available daily, downlinked to a dedicated ground station located on Kerguelen Island.

"Kergulen is a remote and inaccessible place, but it has the advantage of being at the centre of the area we want to survey," explained Philippe Schwab, Technical director of CLS. "New images are received in real time, then automatically processed to discriminate radar echoes from vessels in the zone. Each vessel is then sent with its position via a satellite link to the French authorities on Réunion, where they are analysed to identify legal and illegal vessels.

"Authorised vessels are mandated to have an Argos satellite transmitter aboard, so they can be located and identified. Vessel positions are sent to the French authorities by CLS, the Argos system operator. Argos positions are then matched with radar echoes to discriminate illegal vessels, whose locations are then sent for action to French Navy patrol boats."

The system has been operational since February 2004. It had an early success on 25 June 2004 when French Navy patrol boat Albatross intercepted the Apache, a fishing vessel sailing under the Honduran flag. First identified southeast of Kerguelen Island, the operations centre on Reunion tracked the vessel for three days. The patrol boat fired a warning shot across its bow then boarded it to seize an illegal catch of 60 tonnes of Patagonian toothfish.

"Usually the system is more dissuasive than repressive," Schwab concluded. "Today, illegal fishing has almost disappeared. It seems that the unscrupulous fishermen have understood the efficiency of the system."

Satellite radar sensors detect ships well because their metal surfaces and sharp angles have a high signal return, in contrast to that of the surrounding water.

Envisat ASAR imagery is therefore being utilised for ship detection in a growing number of activities worldwide, including the protection of Icelandic fisheries through the Improving fisheries Monitoring through integrating Passive and Active Satellite-based Technologies (IMPAST) project run by the European Commission's Joint Research Centre (EC-JRC).