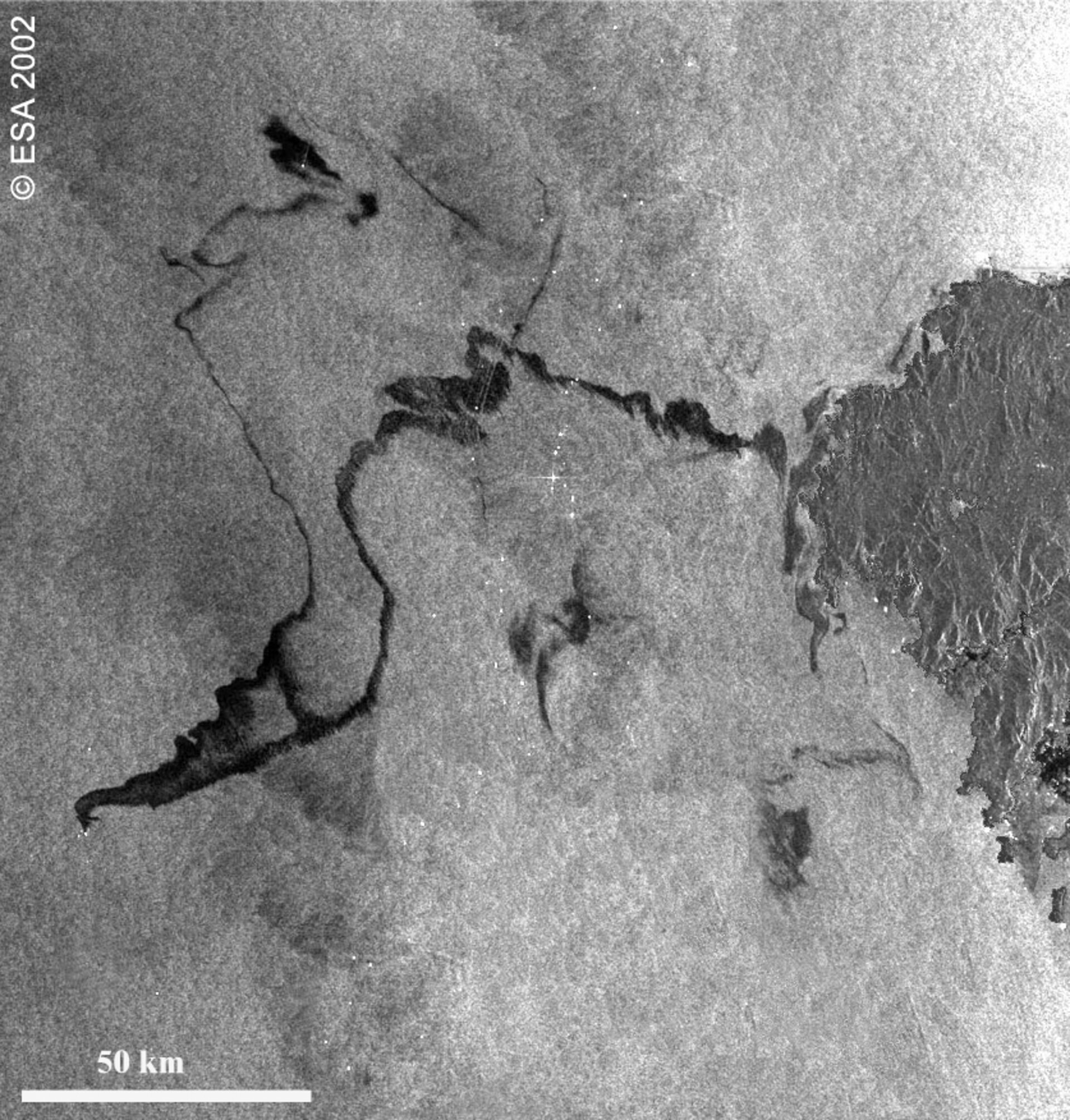 Oil from the wrecked tanker off the northwest coast of Spain had already reached the Spanish coast when ESA's Envisat satellite acquired this radar image of the oil slick, stretching more than 150 km, on Sunday, 17 November, at 10.45 UTC.

The 26-year-old tanker, Prestige, can be seen as a bright white point located about 100 km off the coast. Support vessels are identifiable as smaller white points surrounding the ship. The huge oil slick is clearly visible as a dark plume emanating from the stricken ship and stretching to the northwest coast of Spain.

The image was captured by the Advanced Synthetic Aperture Radar (ASAR) onboard the Envisat spacecraft, launched by ESA last March. The ASAR was operating in its wide-swath mode covering an area approximately 400 km by 400 km.

Strong winds in the area resulted in lighter oil components being blown off while heavier constituents have been moved around on the sea surface, leaving characteristic dark feathery trails. These winds also caused some degree of mixing between the oil and the surrounding sea, reducing the level of oil at the surface and making it more difficult to detect. If a smaller volume of oil had been spilt, or if the spill had occurred further from the coast, it is possible that these strong winds could have ensured the oil dispersed harmlessly, with no adverse impact on the coastal environment.

The presence of oil on the sea surface damps down smaller wind generated waves. It is these waves that reflect the radar signal back in the direction of the source. When they are damped, the reflected power measured by the radar is reduced, causing oil slicks to be seen as dark areas on an otherwise brighter sea.

The slick cuts across a major shipping lane. Shipping traffic in this sea-lane shows up as the numerous white points. The wakes of ships passing through the oil-infested area are seen as light lines in the slick.

ASAR, like other space-based radar systems, essentially provide its own source of illumination and operates at longer wavelengths than optical sensors. This enables it to observe the earth surface at night and through thick cloud cover. This unique capability allowed Envisat's ASAR to “see” the oil leaking from the tanker despite heavy rain and cloud cover in the region that hindered the coverage of optical instruments.

The ASAR acquisition was scheduled on an emergency basis for Sunday 17 November. Envisat, along with ESA's ERS-2 spacecraft, will continue to acquire images for the next few weeks over the Galician coast.

The tanker was first damaged last Wednesday and is estimated to have spilled about 10 000 tonnes of its 70 000-tonne cargo. An additional 10 000 tonnes of oil is thought to have leaked when the ship split in two and sank yesterday. According to media reports, approximately 75 percent of the oil shipment went down with it.

Optimistically, the remaining cargo will either stay in the tanker's holds, or congeal on the ocean floor. If the remaining oil leaks to the surface, the resulting spill would be twice as large as the 1989 Exxon Valdez spill in Alaska, according to some estimates. Envisat will monitor the area regularly along the coast in the coming weeks to trace any oil spills appearing on the sea surface from the sunken tanker.

For the expected international clean-up efforts, future ERS-2 and Envisat imagery will be made available as part of the International Charter on Space and Major Disasters. The Charter is an international collaboration to put satellite remote-sensing technology into service for civil protection agencies and others in response to natural and man-made disasters.

The Charter was activated on 14 November by the European Commission's Civil Protection and Environmental Accidents Unit to support local authorities in Spain in monitoring the oil spill. The satellites of other agencies within the Charter, including the Canadian Space Agency and the French Space Agency, CNES, are tasked over the area as well.

For a high-resolution image of the oil spill, go here.