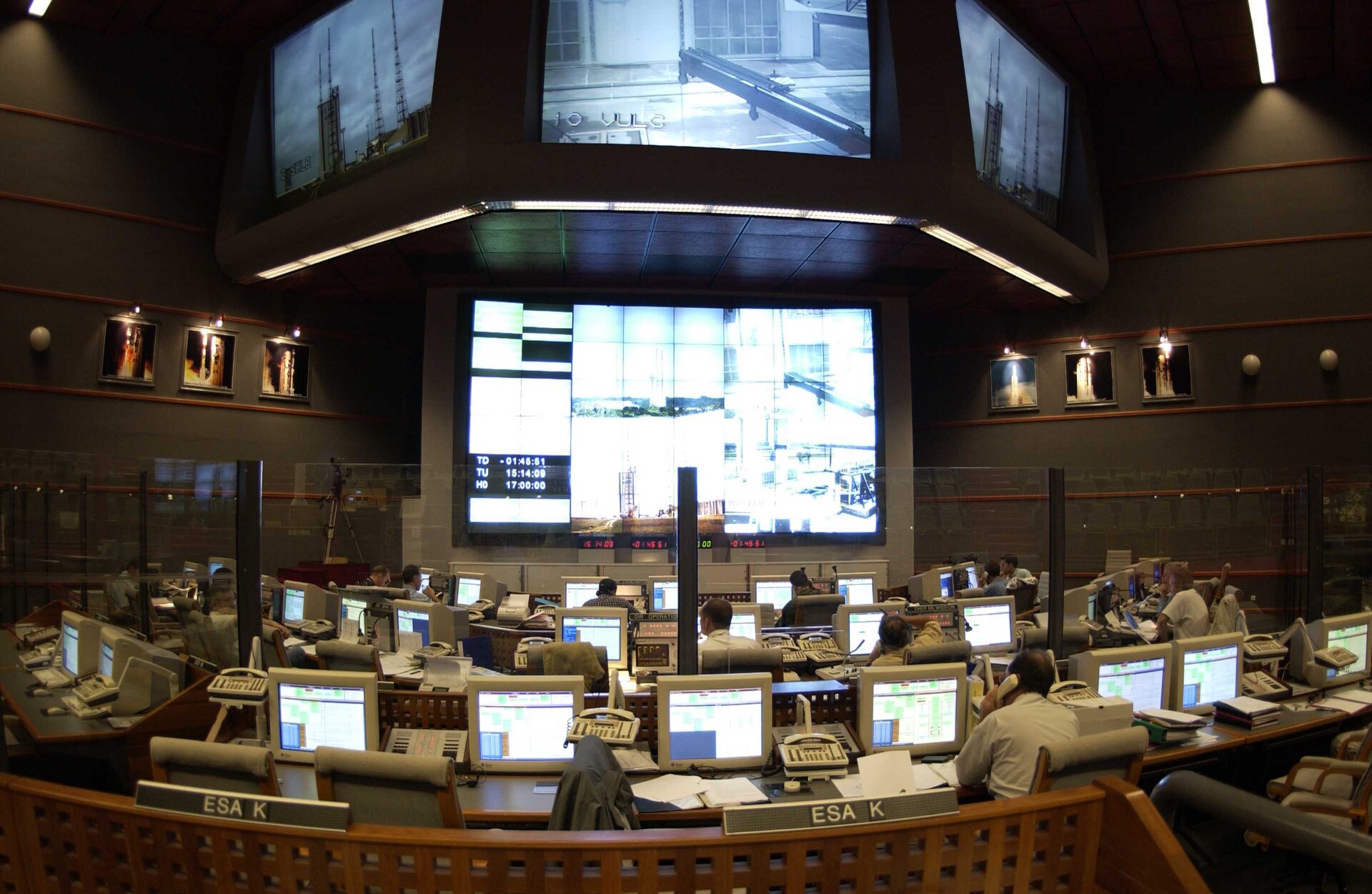 An intent voice announces less than a minute to go. Live video feed shows Envisat safely enshrouded within its launch fairing inside the Final Assembly Building in Kourou, awaiting launch this Thursday. But according to the computer screens the ESA Envisat team is clustered around, as well as in the European spaceport’s Jupiter control centre, and over at ESOC in Germany, the spacecraft is about to leave Earth - right now.

“This is the final full-scale dress rehearsal before the actual launch,” explained ESA engineer Adrie Voordijk, paying close attention to his screen as ‘launch’ time drew near. “It started 23 hours ago, and continues for another hour and a half after launch.”

Just like the true launch itself, this dress rehearsal spanned the globe, with cables linked from Kourou to ESOC in Darmstadt, Germany, where the satellite is controlled after separation away from its rocket. Up until take-off this simulation used actual data from Envisat fed via umbilical. Once off the ground the 25,000 or so separate parameters telemetred down from the satellite are simulated too.

This dress rehearsal’s zero moment came at 2pm local time (1700 GMT), when the Ariane 5’s Vulcain engine ignited. Seven seconds later the twin solid rocket boosters lit – and a virtual lift-off took place. It has to happen just this precisely for real on Thursday because Envisat is aimed at a very precise point in the heavens – in the same orbit but half an hour ahead of its predecessor, ERS-2.

It’s a long trip to reach Envisat’s 800-km orbit – the computer screens show the Ariane 5’s final stage engine only cut off more than 24 minutes later. Envisat loses its protective launch fairing a mere three minutes into the flight, once the launcher ascends above the thickest part of the atmosphere.

The spacecraft – its position and orientation depicted on one screen by a program fed from the simulated telemetry - flew free of the fuel-exhausted rocket at precisely 26 minutes and 35 seconds, and then commences to unfurl its 15-metre-long solar array. In reality this is the one activity that simply has to go as planned – because if it doesn’t, then Envisat’s batteries will become rapidly exhausted and the satellite will be dead in space.

The complex process begins with a set of eight thermal knives that cut the solar array free from the Kevlar cords that held it in place during launch. That done – the correct segments of the complex screen display having turned a reassuring shade of green – the array’s multiple hinges began a sort of complex ballet to position the folded panels away from the main spacecraft hull and lock them in the correct orientation.

The simulation duplicated everything – even the telemetry blackouts that occur as Envisat moves out of sight of a ground station. For twenty minutes the tension grew: nobody had any way of knowing if the deployment had happened or not – the simulation flight controller might have decided to give them a nasty surprise - and then signal was reacquired by the ground station at Perth, Australia, showing that all was going as planned.

Then came time for the solar panels themselves to unfold, stretching out in space like a concertina over the course of some eight minutes, and the first trickle of amps appeared on screen.

The simulation ended as Envisat’s momentum wheels began to correct its position down to a fraction of a degree along all three axes, using the contrast between Earth’s brightness and the darkness of deep space as its guide.

The virtual flight had gone well; its results will be closely analysed to ensure Thursday’s genuine launch and flight is just as successful.