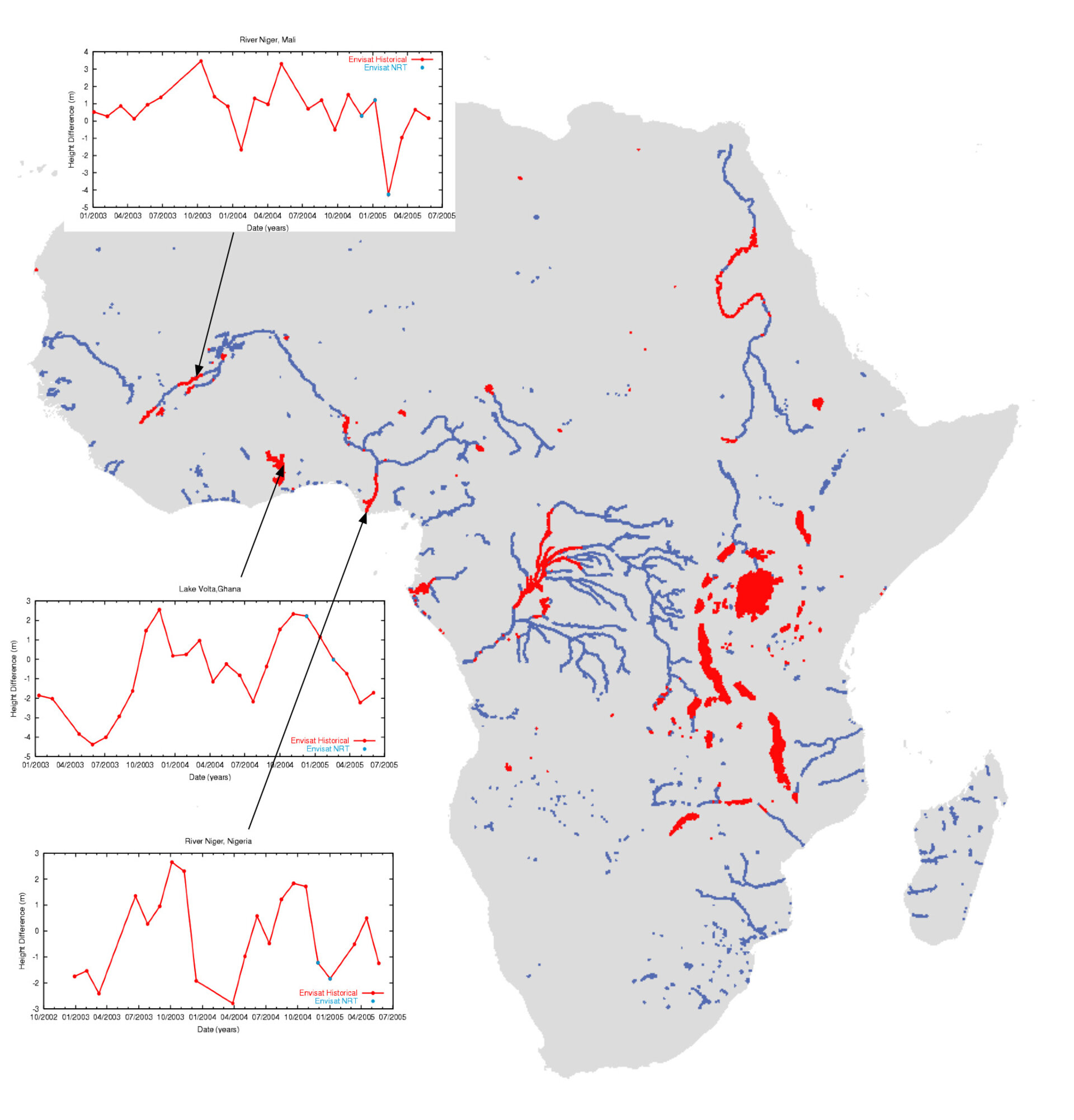 From this week, researchers worldwide can follow the flow of rivers and height of lakes across the African continent from the comfort of their desks. A new web-based demonstration launched to coincide with this week's TIGER Workshop makes Envisat-derived altimetry data for African inland water freely available in near-real time.

Envisat's Radar Altimeter-2 (RA-2) sensor fires around 1800 radar pulses a second down to the surface of the Earth, then measures very precisely how long it takes for those pulses to bounce back. This travel time can be used to calculate the height of the Earth's oceans, ice masses, land surfaces, and also – thanks to a sophisticated algorithm developed by the UK's De Montfort University (DMU) in Leicester under ESA contract – previously elusive results for rivers and lakes on land.

The effort to develop the River and Lake product was led by Professor Philippa Berry of DMU's Earth and Planetary Remote Sensing Laboratory: "Monitoring of water resources is vital over Africa, to enable best use of this precious commodity. Until now reliable information has been difficult to access because of the high cost in equipment, manpower and communications, and because it is difficult to obtain these precious hydrological data from many countries.

"However heights of inland water can now be measured directly from space using radar altimeters, currently carried on several satellites and originally designed to measure ocean height. This is a very exciting development which has the potential to transform the management of drought crises and water-related conflict around the world.

"Whilst data from a few selected large lakes has been available previously, the combination of DMU's sophisticated processing scheme and the unique design of the Envisat altimeter have for the first time allowed near-real time measurements to be made over lakes and major rivers across Africa.

"The new system identified that part of each surface echo originating from inland water, enabling measurement of much smaller targets than has previously been possible. This, combined with the altimeter's capability to return good data even in rough terrain, means that we can provide much more accurate and up-to-date water level information than has ever been possible before."

The demonstration website is being launched at this week's ESA TIGER Workshop at ESRIN, the European Centre for Earth Observation in Frascati in Rome. Starting 3 October, this four-day event involves more than 200 African organisations from 31 countries, and aims to apply Earth Observation technologies in support of integrated water resource management.

"The information will be released using a web-based delivery service hosted at ESRIN," Berry added. "It will be available within three days of being measured by Envisat. The system may even be pushed further to deliver water levels in less than six hours, using near-real time data from the precise orbit determination system aboard the satellite known as DORIS (Doppler Orbitography and Radiopositioning Integrated by Satellite), in order to better satisfy the actual needs of users."

Following the TIGER Workshop the River and Lake demonstration system – which will start off by featuring products for Canada as well as Africa – will switch to other regions of the Earth on a periodic basis, beginning with Latin America.

Supported as part of the Agency's Earth Observation Data User Element (DUE), the River and Lake project is aimed at developing, demonstrating and assessing an information service based on inland water altimetry.