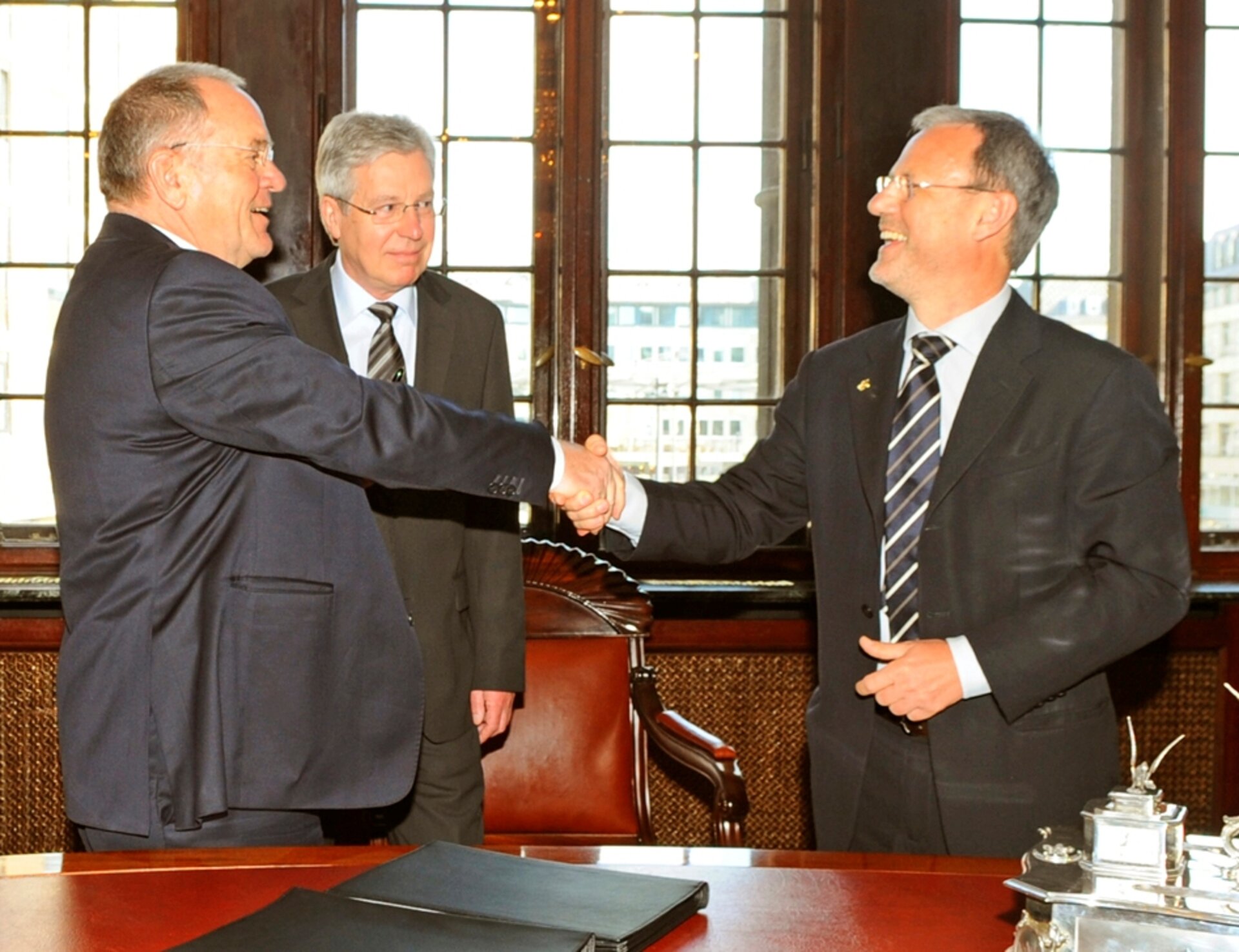 ESA has awarded a contract to Eurockot for the launch of two of its Earth observation missions. The first will be the next Earth Explorer: Swarm, a constellation of three satellites to study Earth's magnetic field.

With the successful launch of the CryoSat-2 Earth Explorer less than 24 hours ago, this new contract highlights ESA's commitment to learning more about Earth from the vantage point of space.

The contract covers the launch of ESA's Swarm magnetic-field mission and a 'ticket' for one other mission, yet to be decided. Both will take place from the Plesetsk Cosmodrome in northern Russia using a Rockot launcher.

An event was held today in Bremen, Germany, to mark the signature of the contract, and attended by Volker Liebig, ESA's Director of Earth Observation Programmes, Matthias Oehm, CEO of Eurockot, and Sergey Anisimov, Deputy Director General of Khrunichev, builder of the Russian rocket.

Volker Liebig said, "We all know that for an ambitious mission such as Swarm it is of utmost importance to choose a reliable launch provider. After the successful Eurockot launches of GOCE and SMOS, we are looking forward to a full launch service that will deliver all three Swarm satellites into their orbits."

The series of Earth Explorer satellites provides a unique approach to observing Earth from space. Developed in direct response to issues raised by the scientific community, they improve our understanding of how the ‘Earth system’ works and the effect that human activity is having on natural processes.

While focusing on specific aspects of the Earth system, they use cutting-edge technology and remote-sensing techniques and, together with the scientific questions addressed, lead to new applications for Earth observation data.

The Swarm mission comprises three satellites, launched together, to provide high-precision and high-resolution measurements of the strength and direction of Earth's magnetic field. This will provide new insights into Earth's interior, further our understanding of atmospheric processes connected with climate and weather, and offer practical applications in areas such as space weather and radiation hazards.

The launch of Swarm is planned for before mid-2012. Although Rockot is a small launcher, it can deliver all three satellites into an orbit 490 km above Earth.

Eurockot is based in Bremen, Germany and is a joint venture between Astrium and Khrunichev Space Centre. The company provides low-orbit launches for observation and communication satellites from its dedicated facilities in northern Russia.