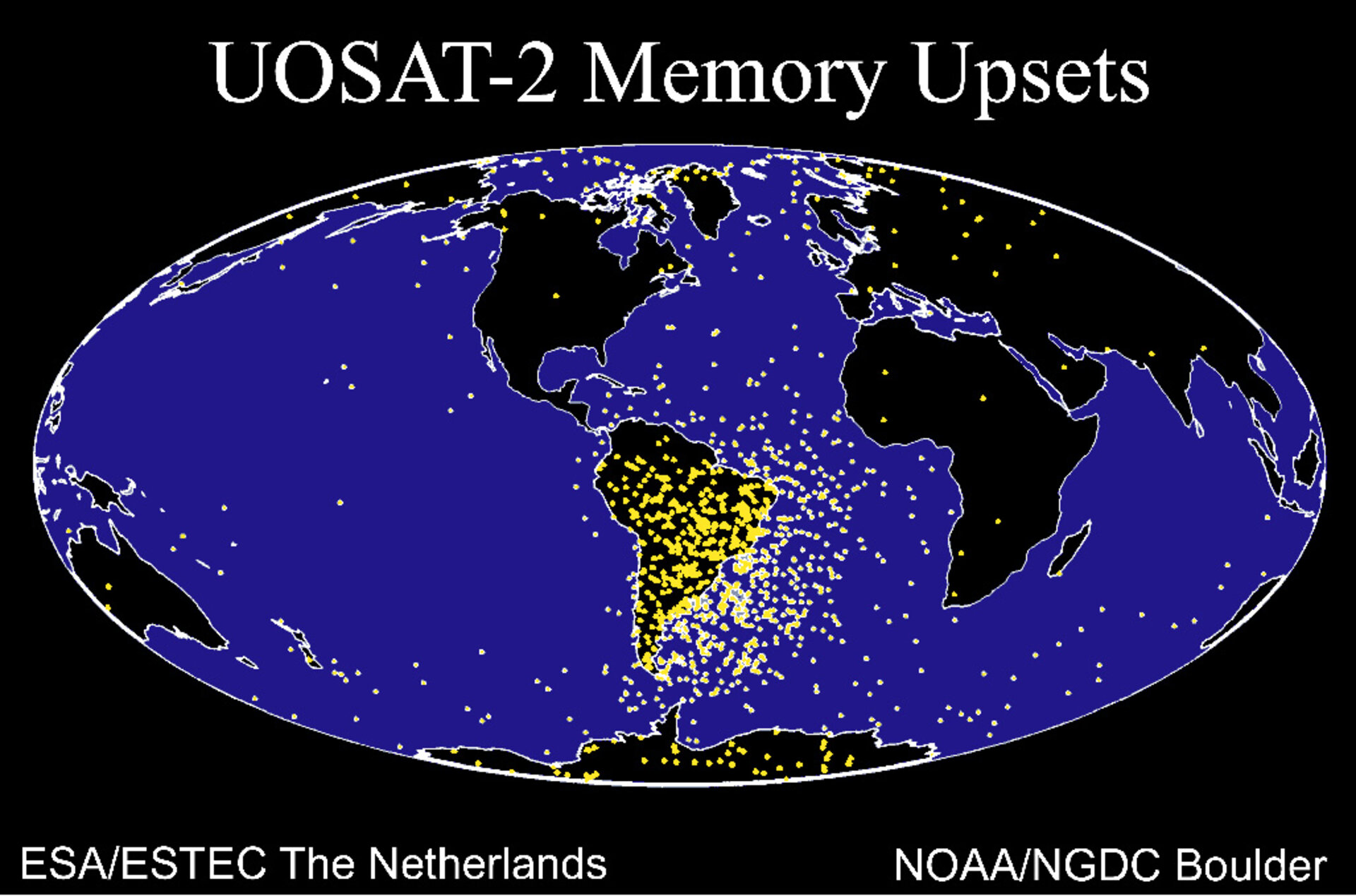 Mission controllers cross their fingers whenever the Sun is stormy and their spacecraft have to fly over the South Atlantic. There, even satellites in low orbits suffer many hits by atomic bullets from the Sun. Troublesome faults occur in electronic systems and astronauts see flashes in their eyes. The Earth’s magnetic field, which shields our planet against charged atomic particles coming from outer space, is curiously weak in that region.

The South Atlantic Anomaly, as the experts call it, is one pressing reason why they are intensifying their exploration of the Earth’s magnetism. Denmark’s Ørsted satellite, launched in 1999, is dedicated to magnetic research, whilst Germany’s CHAMP mission (2000) measures both magnetism and gravity. These satellites show that the danger zone for satellites over Brazil and the South Atlantic is growing wider towards the southern Indian Ocean.

The Earth’s magnetic field is becoming generally weaker at an astonishing rate. When a French-Danish team compared Ørsted’s results for 2000 with those from an American satellite, Magsat, 20 years earlier, the decline in the field’s strength suggested that it might disappear completely in a thousand years or so. The experts wonder if our planet is preparing to swap its north and south magnetic poles around, as it has often done before during the Earth’s long history.

These and other mysteries about our magnetic planet will get the closer attention they deserve, in ESA’s forthcoming Swarm project. Three satellites will work together to measure the magnetic field and its variations far more accurately than ever before. The Swarm mission was proposed to ESA by Eigil Friis-Christensen (Copenhagen), Hermann Lühr (Potsdam) and Gauthier Hulot (Paris) with support from scientists in seven European countries and the USA. ESA selected the project in 2004 as an 'opportunity mission' in its Earth Explorer programme. All being well, Swarm will be operational by 2009.

After climbing into space on a single launcher, the satellites will adopt orbits passing over the Earth’s poles. Swarm A and B will fly side by side, simultaneously measuring the magnetic field from positions up to 150 kilometres apart in the east-west direction near the equator. Their orbits will at first be 450 kilometres above the surface, but by the end of the mission they will come as low as 300 kilometres, for more accurate measurements of magnetism originating from the Earth’s crust.

Swarm C will always fly higher, remaining at more than 500 kilometres altitude throughout the mission. Compared with its sisters, Swarm C will give simultaneous snapshots of the magnetic field over quite different regions of the Earth, and impressions of the same region at different times of day.

Separating the different sources of magnetism

Ordinary magnetic compasses obey the main magnetic field, produced by electric currents in the Earth’s core of molten iron. But in magnetic storms, compass needles wander. Since the 19th Century scientists have linked these storms to eruptions on the Sun. Many space ventures, recently including the ESA-NASA SOHO spacecraft and ESA’s four-satellite Cluster mission, have helped to clarify the solar connection.

We live in a protective bubble in space called the magnetosphere. At its boundary, gusts in a non-stop solar wind of atomic particles battle with the Earth’s magnetism. As a result, events in outer space make a continual but highly variable contribution to the magnetic field. So do electric currents in the ionosphere, the zone of free electrons and charged air molecules high in the atmosphere that’s best known for reflecting radio signals.

Other, much weaker patterns are overlaid on the global picture. In the Earth’s crust, many rocks have built-in magnetism that remembers the direction of the main magnetic field when they formed. This affects the field measured locally. By its subtle east-west comparisons Swarm will picture the magnetic field of the crust with unprecedented clarity. And even ocean water generates electric currents as it move in the main field, so that the ebb and flow of the tides have a slight magnetic effect.

As gauged by the satellites, the main field is roughly 6,000 times stronger than the rock magnetism of the ocean floor, and 30,000 times greater than the influence of the oceanic tides. Only with delicate measurements by satellite constellations, supported by ground stations, ships and aircraft carrying magnetic instruments, can scientists sort out all the patterns of magnetism from the different sources.

The most careful analyses reveal yet another effect. Magnetic variations drive electric currents in the mantle, the main region between the core and the crust. These in turn cause further magnetic changes, from which scientists can estimate the electrical conductivity of the mantle. This provides a check on the temperature of the material hidden deep in the Earth’s interior.

"What excites us is the huge scope of what we can study even with quite small satellites," comments Nils Olsen of the Danish National Space Center in Copenhagen, who analyses Ørsted’s results while he helps to plan Swarm. "By making magnetic measurements in space we get new information about the Earth, from the molten core deep under our feet, through the mantle, to the crust on which we live. And then we go on upwards into the upper atmosphere, through the planet’s local space environment, and all the way to the Sun itself, which is the source of daily magnetic disturbances."

Solar storms can be fatal for satellites, and not only on account of radiation damage. The atmosphere inflates and low-orbiting spacecraft run into unexpected air resistance. Experts used to think it was just a matter of the air being heated by particles and electric currents in the regions around the poles, where auroras occur. Now a sensitive French-built accelerometer on the German CHAMP satellite has revealed heating by intense currents where the solar wind pushes towards the magnetic poles in daytime. The three Swarm satellites will investigate this new effect with accelerometers of their own.

Swarm’s operational lifetime, 2009-13, will coincide with the next expected peak of storminess on the Sun. Immediate practical benefits will centre on Swarm’s general monitoring of space weather, and the solar events affecting not just spacecraft and astronauts but technological systems on the ground as well. Magnetic storms can damage power systems and pipelines, whilst the changes in the magnetic field can mislead any navigational systems that use magnetic compasses. These include compasses operating underground to guide the drills used to find and recover oil.

For scientists, the biggest benefit of Swarm is that high-quality magnetic measurements provide a new way of 'x-raying' the hidden interior of planet. Earthquake waves and variations in the strength of gravity already provide a picture of the hot core, the rocky mantle that surrounds it, and the ever-active crust. But the picture is not yet clear enough for scientists to agree how the internal machinery of the planet really works.

"Magnetic measurements give a fresh point of view on the Earth’s interior," says Roger Haagmans, who is responsible for solid-Earth science in ESA’s Earth Observation programme. "And Swarm will also investigate the puzzling changes in the Earth’s core that are responsible for the present weakening of the magnetic field. That’s already a matter of practical concern for many satellite operators. With a better idea of the reasons, we may know what to expect in the busy decades of spaceflight that we have ahead of us."