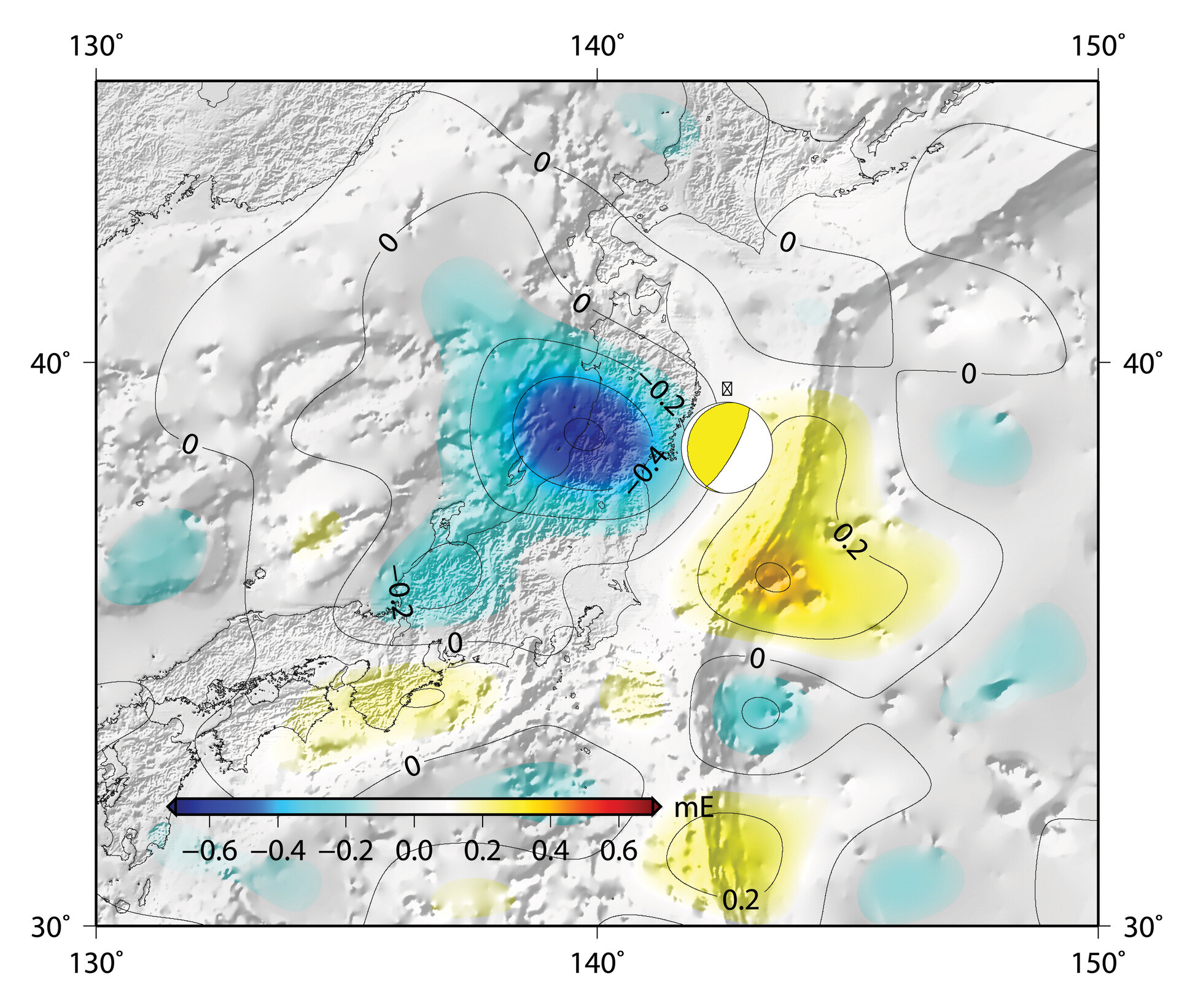 ESA’s GOCE satellite has revealed that the devastating Japanese earthquake of 2011 left its mark in Earth’s gravity – yet another example of this extraordinary mission surpassing its original scope.

GOCE mapped Earth’s gravity with unrivalled precision for over four years, but nobody really expected the data to show changes over time.

Now, careful analysis shows the effects of the 9.0 earthquake that struck east of Japan’s Honshu Island on 11 March 2011 are clearly visible in GOCE’s gravity data.

Large earthquakes not only deform Earth’s crust, but can also cause tiny changes in local gravity.

The strength of gravity varies from place to place on our planet’s surface and it was GOCE’s task to map these variations very precisely.

There are a number of reasons why values of gravity differ, but one is a consequence of material inside Earth being inhomogeneous and unevenly distributed. Since earthquakes shift around rock and other material tens of km below the surface, they also cause small changes in the local gravity.

Earthquakes under oceans, as in the 2011 Japanese quake, can also change the shape of the sea bed. This displaces water and changes the sea level, which in turn also affects gravity.

After more than doubling its planned life in orbit, the satellite recently ran out of fuel and reentered the atmosphere, largely disintegrating in the process. Although it is no longer in orbit, the real mission is only just starting because scientists will be analysing the data for years to come to help understand many aspects of our world.

Information from GOCE is being used to understand how oceans transport huge quantities of heat around the planet and to develop a global height reference system, for example.

The mission has already shed new light on different aspects of Earth – from atmospheric density and winds, to mapping the boundary between the crust and upper mantle, and to understand geodynamic processes occurring in these layers far below our feet.

In a surprising discovery earlier this year unrelated to gravity changes, the satellite’s accelerometer and ion thruster also revealed that GOCE had 'felt' sound waves in space from the Japanese quake.

Recently, scientists from the German Geodetic Research Institute, DGFI, and from Delft University of Technology in the Netherlands analysed the high-resolution vertical gravity gradients measured over Japan. They discovered that the quake had clearly ruptured the gravity field.

This is the first time that GOCE has been shown to have found changes over time. This work was carried out through ESA’s Earth Observation Support to Science Element.

Moreover, the gravity change measured by GOCE differs in size and location compared to those predicted by standard models.

GOCE’s results are consistent with coarser observations from the NASA–German Grace satellite, which is designed to measure changes over time. This suggests that GOCE data will be important in improving models and will therefore contribute to our understanding of earthquakes.

Martin Fuchs from DGFI said, "Thus, we see that GOCE gravity gradients complement other types of data such as seismic, GPS and GRACE satellite gravimetry.

"We are now working in an interdisciplinary team to combine GOCE data with other information to obtain a better picture of the actual rupture in the gravity field than is currently available."