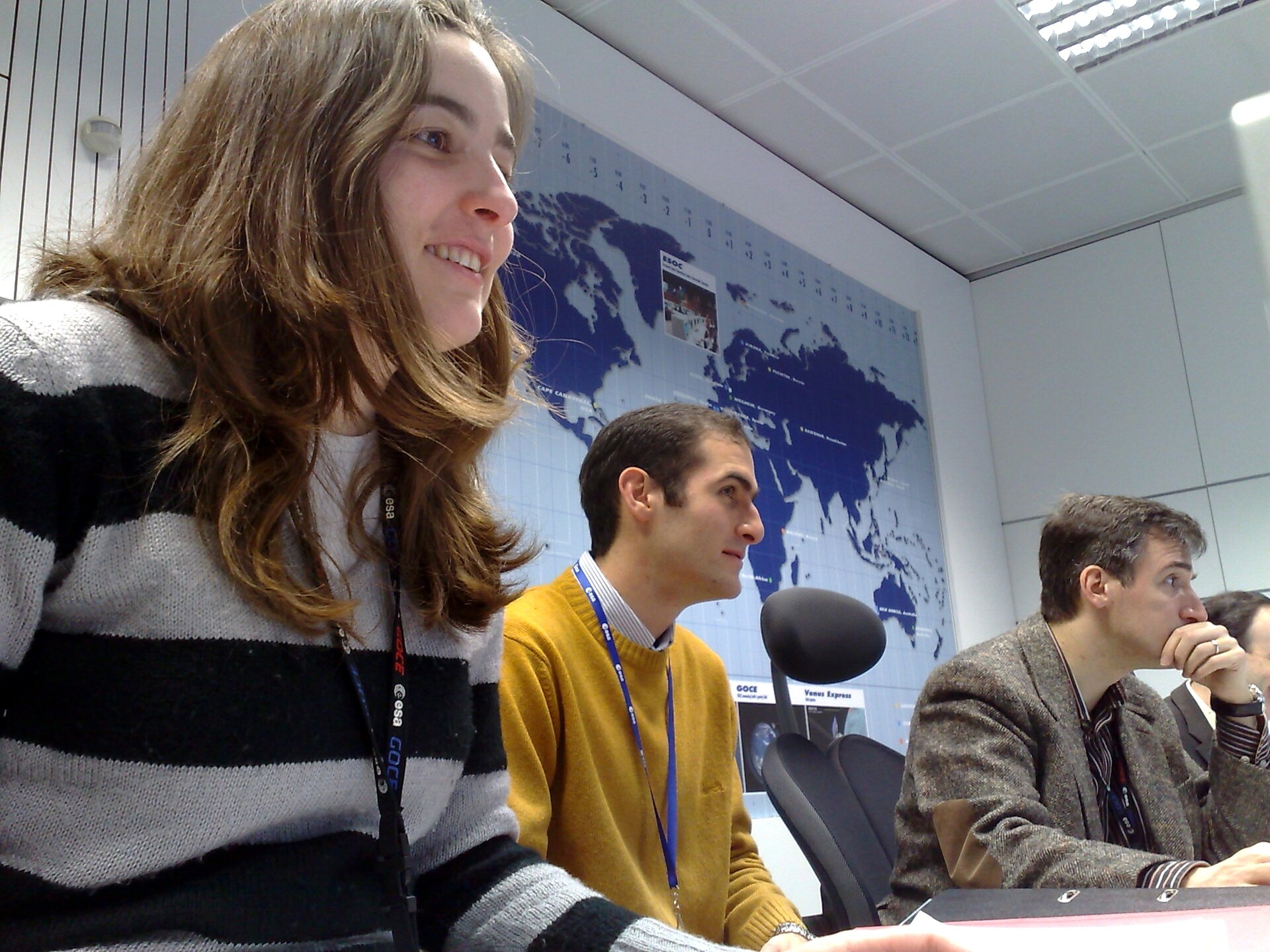 Orbiting on the edge of space at just 268 km, GOCE would have a mere eight days before sinking dangerously low if its ion propulsion should fail. Some of the first responders who would have to react in such a contingency are the flight dynamics specialists on ESA's Operations Team.

To achieve the mission's crucial scientific objectives, ESA's GOCE (Gravity field and steady-state Ocean Circulation Explorer) must orbit as low as possible, in order to sense minute variations in the Earth's gravitational field (see links for background on mission objectives).

This presents unique challenges for the entire flight operations team at ESOC, the European Space Operations Centre, but particularly so for the flight dynamics specialists responsible for determining GOCE's orbit, calculating its position and orientation and - together with the Flight Control Team - reacting to any onboard contingency.

"We orbit on the edge of reentry; if anything goes wrong, we have very little time before we start dropping down - about eight days before we get dangerously low," says Marco Antonio Garcia Matatoros, lead Flight Dynamics Coordinator for GOCE.

Addressing the challenges of global change, Europe is launching GOCE to map our planet's gravity field in unprecedented detail. As part of ESA's Living Planet Programme, GOCE is the first of a series of Earth science missions called Earth Explorers.

The GOCE gravity-field map is crucial for deriving accurate measurements of ocean circulation and sea-level change, both of which are affected by climate change. GOCE-derived data are also needed to understand more about processes occurring inside the Earth and for use in practical applications such as construction, planning and surveying as well as providing a reference sea-surface level.

The spacecraft - a technological marvel with autonomous electric propulsion - relies on its aerodynamic shape for stability and orientation control. At GOCE's super-low altitude, the atmosphere is sufficiently dense to exert relatively significant drag forces on the spacecraft. There are no moving parts, such as the reaction wheels or jet thrusters normally used on spacecraft to slew, rotate and point scientific instruments or radio antennas.

We orbit on the edge of reentry; if anything goes wrong, we have very little time before we start dropping down.

The cutting-edge electric engine generates up to 20 mN (milli-Newtons) of ion thrust, which is roughly equal to the weight (on Earth) of a few drops of water. But this is sufficient to enable GOCE to maintain its nominal altitude at about 270 km and slowly lift it to safe altitudes during eclipse seasons (when less sunlight means less power for the electric propulsion). The fuel tank holds 40 kg of Xenon propellant, sufficient for a 30-month mission.

GOCE is the first ESA satellite employing 'drag-free control' (in which the satellite is in pure free fall around the Earth) and the first-ever satellite to use electric propulsion to continually compensate for atmospheric drag. The DFACS (Drag-Free and Attitude Control Subsystem) performs autonomous determination and control of the spacecraft's attitude pointing, angular movements and linear and angular accelerations.

The DFACS uses, among other inputs, signals from the EGG (Electrostatic Gravity Gradiometer) - the primary on-board scientific instrument - to provide information on the drag experienced by GOCE. The propulsion is then varied automatically to maintain the required velocity and altitude. GOCE is one of the first missions to use data from an on-board scientific instrument in flight control (usually, scientific and flight control systems are separate).

"The DFACS is fully automatic, and GOCE's altitude varies continuously. A crucial step during LEOP will be calibrating on-board magnetometers in order to establish full control over the spacecraft," says Garcia Matatoros.

LEOP refers to the critical 'Launch and Early Orbit Phase', lasting some three days after launch on 16 March, when the entire Mission Control Team will work in shifts 'on console' in ESOC's Main Control Room 24 hours per day.

The cutting-edge electric engine generates up to 20 milli-Newtons of ion thrust, which is roughly equal to the weight (on Earth) of a few drops of water.

During LEOP, the Flight Dynamics team will provide continuous support from a specialised Flight Dynamics Room, located just a few metres away. During LEOP and the approximately 45-day commissioning period, the spacecraft will be commissioned and all on-board systems will be verified for proper operation.

Throughout the mission, to fix the spacecraft's position, the team will use the SSTI (Satellite-to-Satellite Tracking Instrument) - a state-of-the-art GPS (Global Positioning Satellite) receiver on board GOCE that has been specially adapted to operate in a low-Earth orbit environment.

It can simultaneously track 12 GPS satellites and provides both science data and real-time information on spacecraft position and velocity. "SSTI will give us a position fix accurate to within a few metres, and we will update our orbital forecasts every day for the coming seven days," says Garcia Matatoros.

After injection into orbit at an altitude of 285 km by its Russian Rockot booster, GOCE will follow an unusual orbital profile, gradually 'falling' over the next 45 days to its first operational altitude of around 278 km.

The Flight Dynamics team's daily work will be complicated by expected variations in atmospheric density - by up to a factor of two in a very short time - due to extreme solar conditions - and on longer scales because of the 11-year solar cycle. GOCE's nominal altitude will also vary from 268 km to 278 km depending on seasonal variations in how the Earth eclipses the Sun.