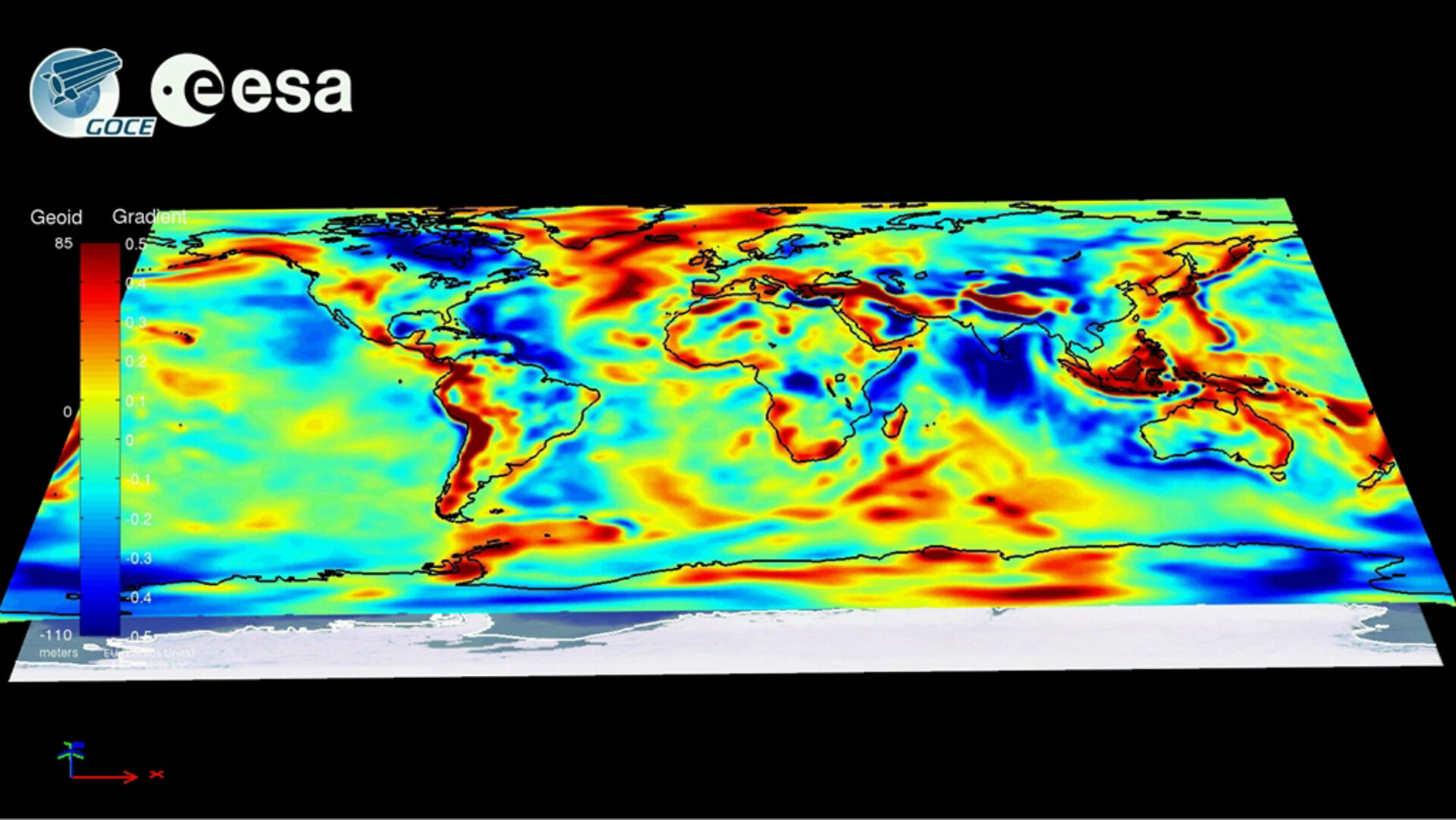 Following the launch and in-orbit testing of the most sophisticated gravity mission ever built, ESA’s GOCE satellite is now in ‘measurement mode’, mapping tiny variations in Earth’s gravity in unprecedented detail.

The ‘Gravity field and steady-state Ocean Circulation Explorer’ (GOCE) satellite was launched on 17 March from northern Russia. The data now being received will lead to a better understanding of Earth’s gravity, which is important for understanding how our planet works.

It is often assumed that gravity exerts an equal force everywhere on Earth. However, owing to factors such as the rotation of the planet, the effects of mountains and ocean trenches, and density variations in Earth’s interior, this fundamental force is not quite the same all over.

Over two six-month uninterrupted periods, GOCE will map these subtle variations with extreme detail and accuracy. This will result in a unique model of the ‘geoid’ – the surface of an ideal global ocean at rest.

A precise knowledge of the geoid is crucial for accurate measurement of ocean circulation and sea-level change, both of which are influenced by climate. The data from GOCE are also much-needed to understand the processes occurring inside Earth. In addition, by providing a global reference to compare heights anywhere in the world, the GOCE-derived geoid will be used for practical applications in areas such as surveying and levelling.

A little over six months after launch, GOCE is now delivering the first set of data that will build into the most detailed map of Earth’s gravity field ever realised. Before entering this mode, the satellite was tested thoroughly. It was then gently brought down from an altitude of around 280 km to its current orbit slightly below 255 km, which is extremely low for an Earth observation satellite.

During the three months after launch, the satellite was commissioned and calibrated, which is standard procedure to ensure that all systems are working as they should. This included testing GOCE’s cutting-edge electric ion engine that helps keep the satellite’s orbit ‘drag-free’, and its highly sensitive gradiometer instrument, which senses the gravitational tug of Earth.

Gravity is stronger closer to Earth, so GOCE was designed to orbit as low as possible while remaining stable as it flies through the fringes of our atmosphere. To help avoid drag and ensure that the gravity measurements are of true gravity, the satellite has to be kept stable in ‘free fall’. Any buffeting from residual air at this low altitude could potentially drown out the gravity data.

GOCE’s sleek aerodynamic design helps this unique satellite to cut though what remains of the atmosphere at this exceptionally low altitude. Moreover, the electric ion thruster at the back continuously generates tiny forces to compensate for any drag that GOCE experiences along its orbit.

Space gradiometry and the use of the sophisticated electric propulsion are both ‘firsts’ in satellite technology, so the commissioning and calibration were particularly important for the success of the mission. This phase was completed in the summer, ready for the tricky task of bringing GOCE down to its operational altitude, which took a couple of months.

“You wouldn’t want to place a satellite like GOCE at the measurement altitude from day one,” commented Michael Fehringer, ESA’s GOCE System Manager. “We needed time to check the satellite without running the risk of decaying below the point where the ion propulsion could not compensate for the air drag. Therefore, at launch we injected GOCE into an initial orbit about 25 km above the measurement altitude. After commissioning, we brought it to its current altitude of 255 km, which we reached on 13 September. The ion propulsion started immediately and now we are in drag-free mode, ready for operation.”

It turns out there is very little solar activity at the moment, which means a calmer environment for GOCE. So its current orbit of 255 km is a few kilometres lower than engineers had originally planned. This is good news – the gravity measurements being made at the moment will be even more accurate.

Now fully operational, with its solar panels bathed in sunlight, GOCE has truly embarked upon its mission: to sense Earth’s gravity as never before.

Rune Floberghagen, ESA’s GOCE Mission Manager, said that, “The completion of the commissioning and first in-flight calibration marks an important milestone for the mission. We are now entering science operations and are looking forward to receiving and processing excellent three-dimensional information on the structure of Earth’s gravity field.”