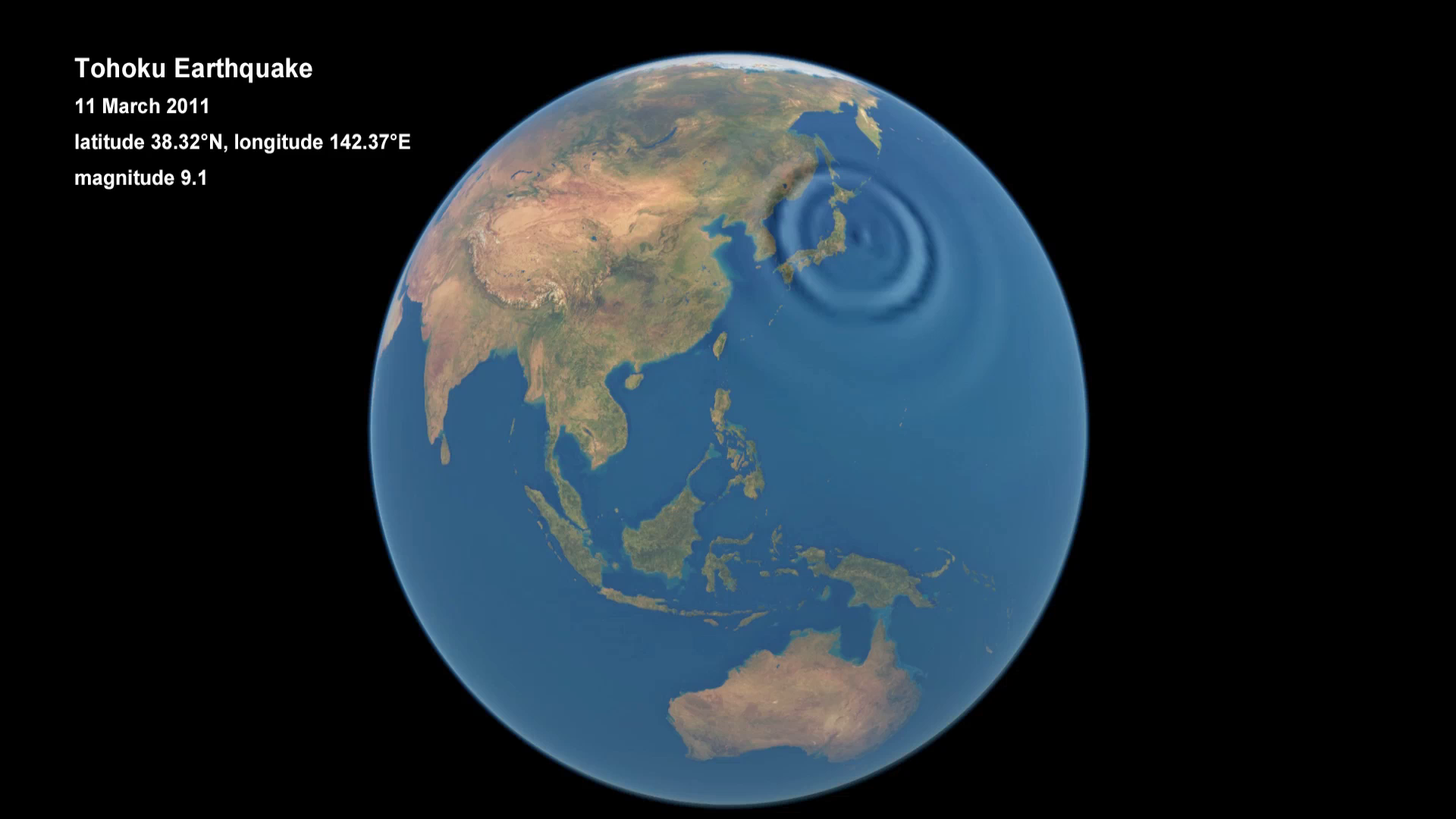 Satellites map changes in Earth’s surface caused by earthquakes but never before have sound waves from a quake been sensed directly in space – until now. ESA’s hyper-sensitive GOCE gravity satellite has added yet another first to its list of successes.

Earthquakes not only create seismic waves that travel through Earth’s interior, but large quakes also cause the surface of the planet to vibrate like a drum. This produces sound waves that travel upwards through the atmosphere.

The size of these waves changes from centimetres at the surface to kilometres in the thin atmosphere at altitudes of 200–300 km.

Only low-frequency sound – infrasound – reaches these heights. It causes vertical movements that expand and contract the atmosphere by accelerating air particles.

On Monday, Japan remembers the 20 000 people who died in the earthquake and tsunami that devastated its northeastern coast two years ago. New studies have revealed that this massive quake was also felt in space by ESA’s GOCE satellite.

Since it was launched in 2009, GOCE has been mapping Earth’s gravity with unrivalled precision, orbiting at the lowest altitude of any observation satellite. But at less than 270 km up, it has to cope with air drag as it cuts through the remnants of the atmosphere.

The cleverly designed satellite carries an innovative ion engine that instantly compensates for any drag by generating carefully calculated thrusts. These measurements are provided by very precise accelerometers.

While the measurements ensure that GOCE remains ultra-stable in its low orbit to collect ultra-precise measurements of Earth’s gravity, atmospheric density and vertical winds along its path can be inferred from the thruster and accelerometer data.

Exploiting GOCE data to the maximum, scientists from the Research Institute in Astrophysics and Planetology in France, the French space agency CNES, the Institute of Earth Physics of Paris and Delft University of Technology in the Netherlands, supported by ESA’s Earth Observation Support to Science Element, have been studying past measurements.

They discovered that GOCE detected sound waves from the massive earthquake that hit Japan on 11 March 2011.

When GOCE passed through these waves, its accelerometers sensed the vertical displacements of the surrounding atmosphere in a way similar to seismometers on the surface of Earth. Wave-like variations in air density were also observed.

Raphael Garcia from the Research Institute in Astrophysics and Planetology said, “Seismologists are particularly excited by this discovery because they were virtually the only Earth scientists without a space-based instrument directly comparable to those deployed on the ground.

“With this new tool they can start to look up into space to understand what is going on under their feet.”

As the animation shows, GOCE, circling Earth at almost 8 km/s crossed the infrasound travelling above the Pacific Ocean at the speed of seismic surface waves, around 4 km/s. Then, after having passed over the North Pole, GOCE caught the infrasound wavefront again above Europe.

These observations are the first direct sounding of atmospheric waves created by earthquakes.

Sean Bruinsma from CNES added, “After fruitless past analyses of data from the CHAMP and GRACE missions for other earthquakes, we are really excited to find the predicted waves in the low-altitude and high-precision GOCE data.”

Rune Floberghagen, ESA’s GOCE Mission Manager noted, “The GOCE team has always known that our accelerometers are something truly special.

“They are about 100 times more sensitive than previous accelerometers. So good, in fact, it was obvious these data would find great uses outside the domain of the gravity field by, for example, probing the space environment in new ways.

“We are now of course excited to see such predictions turning into reality, with such an exciting application in the field of seismology.”