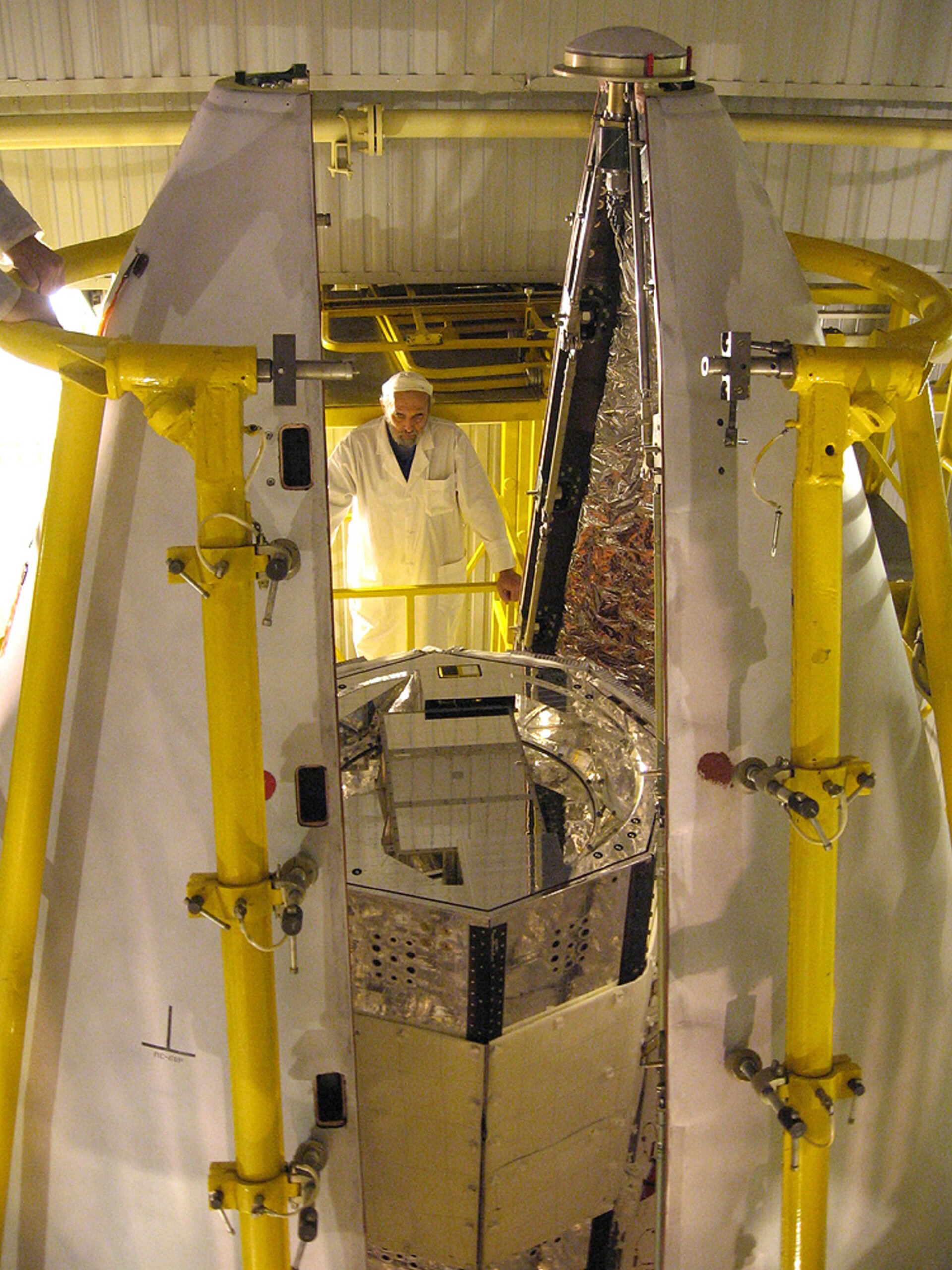 As preparations for the launch of GOCE on 10 September continue on schedule, an important milestone has just been achieved as engineers at the Plesetsk Cosmodrome in northern Russia say farewell to the satellite as it is encapsulated in the two half-shells of the launcher's fairing.

Now sealing the slender five-metre long GOCE (Gravity field and steady-state Ocean Circulation Explorer) spacecraft from view, the protective fairing will not be opened again until around three minutes after launch. Then, two minutes after the fairing half-shells have opened and dropped away, the second stage is released leaving the Breeze-KM Upper Stage to take GOCE to its injection orbit of 285 km above the surface of the Earth. At that moment, the GOCE transmitters will switch on automatically and we will receive the first telemetry signal from GOCE in space.

The process of joining GOCE to the Breeze-KM Upper Stage and placing it in the fairing requires great care and precision. With only 15cm to spare, the spacecraft, which had already been fixed to the Breeze-KM adapter, was lifted and transferred by crane to join the Upper Stage. Once positioned, the procedure to join the two together took place and the now so-called 'Upper Composite' was thoroughly checked. With the launch campaign team satisfied that everything was correct, the final task was to apply the GOCE and Eurockot logo stickers to the outside of the fairing.

ESA's Launch Campaign Manager Jürgen Schmid commented that, "So far the GOCE launch preparation activities have gone quite smoothly – this is also thanks to the fully motivated industrial team from Thales Alenia Space. The remaining activities comprise of a final electrical test of the satellite in launch configuration and a dry run of the countdown itself with the Mission Control Centre at the Plesetsk Cosmodrome, ESA's Spacecraft Operations Centre (ESOC) in Germany and the ESA ground network. Today completes the launch team's stay of 5 weeks at the Cosmodrome and we all are looking forward to the launch next week."

The GOCE satellite has been at the Plesetsk Cosmodrome since the end of July 2008 undergoing preparation for launch. Activities have now turned to rolling-out the Upper Composite to the actual launch pad, which is about 5 km from the spacecraft preparation facilities, and integration with the rest of the launcher. Launch will take place on Wednesday 10 September at 16:21 CEST (14:21 UTC). The launcher is operated by Eurockot Launch Services, a joint venture between EADS Astrium and the Khrunichev Space Centre (Russia).

The sleek high-tech GOCE satellite embodies many firsts in terms of its design and use of new technology in space to map Earth's gravity field in unprecedented detail. Over its lifetime of about 20 months, GOCE will map these global variations in the gravity field with extreme detail and accuracy. This will result in a unique model of the geoid, which is the surface of equal gravitational potential defined by the gravity field – crucial for deriving accurate measurements of ocean circulation and sea-level change, both of which are affected by climate change. GOCE-derived data is also much needed to understand more about processes occurring inside the Earth and for use in practical applications such as surveying and levelling.

GOCE is the first in the series of Earth Explorer missions being developed within ESA's Living Planet Programme. Earth Explorer missions form the science and research element of the Living Planet Programme. These missions focus on specific aspects of the atmosphere, biosphere, hydrosphere, cryosphere and the Earth's interior, with the overall emphasis on learning more about the interactions between these components and the impact that human activity is having on natural Earth processes.