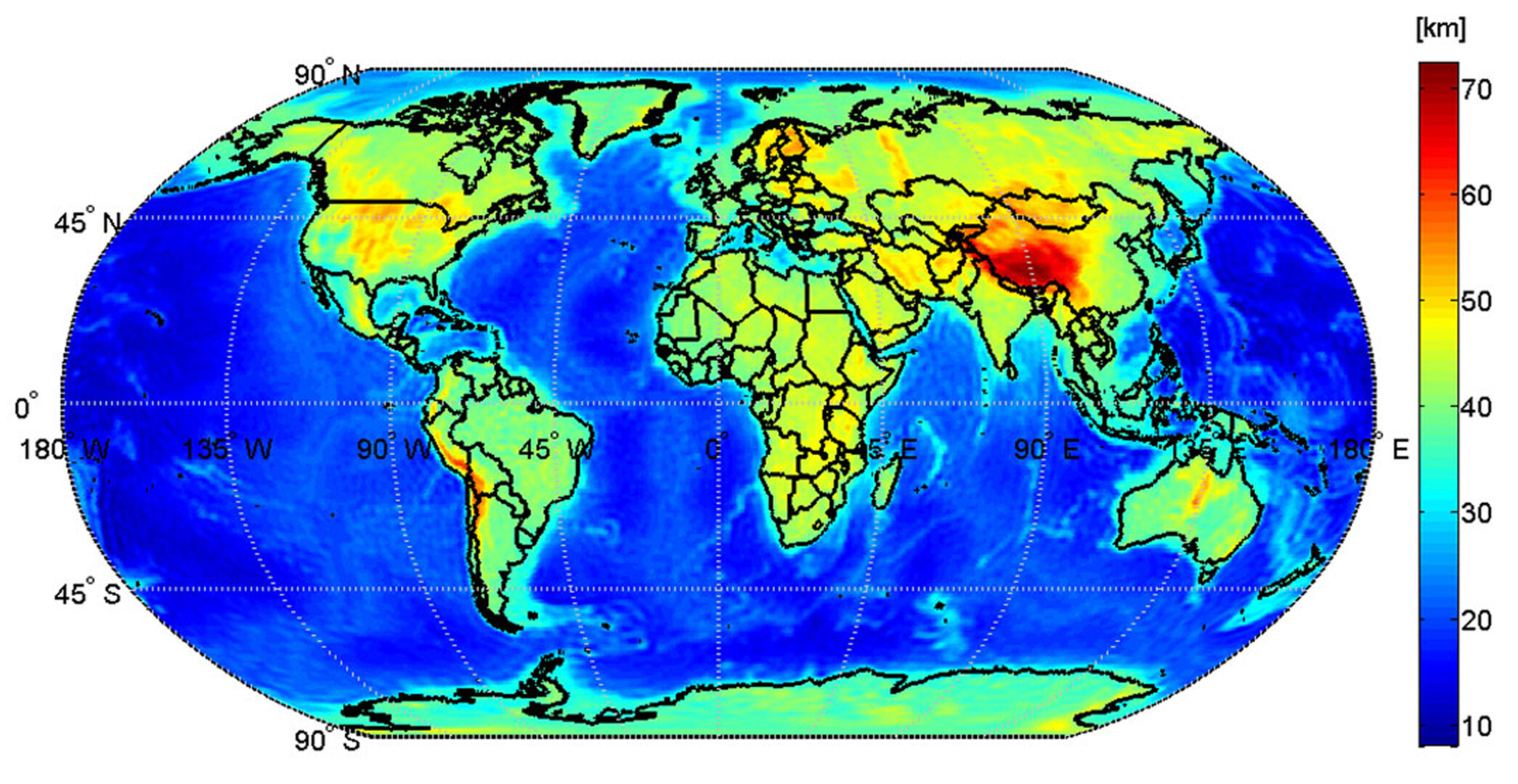 The first global high-resolution map of the boundary between Earth’s crust and mantle – the Moho – has been produced based on data from ESA’s GOCE gravity satellite. Understanding the Moho will offer new clues into the dynamics of Earth’s interior.

Earth’s crust is the outermost solid shell of our planet. Even though it makes up less than 1% of the volume of the planet, the crust is exceptionally important not just because we live on it, but because is the place where all our geological resources like natural gas, oil and minerals come from.

The crust and upper mantle is also the place where most geological processes of great importance occur, such as earthquakes, volcanism and orogeny.

Until just a century ago, we didn’t know Earth has a crust. In 1909, Croatian seismologist Andrija Mohorovičić found that at about 50 km underground there is a sudden change in seismic speed.

Ever since, that boundary between Earth’s crust and underlying mantle has been known as the Mohorovičić discontinuity, or Moho.

Even today, almost all we know about Earth’s deep layers comes from two methods: seismic and gravimetric.

Seismic methods are based on observing changes in the propagation velocity of seismic waves between the crust and mantle.

Gravimetry looks at the gravitational effect due to the density difference caused by the changing composition of crust and mantle.

But the Moho models based on seismic or gravity data are usually limited by poor data coverage or data being only available along single profiles.

The GOCE Exploitation for Moho Modelling and Applications project – or GEMMA – has now generated the first global high-resolution map of the boundary between Earth’s crust and mantle based on data from the GOCE satellite.

GOCE measures the gravity field and models the geoid with unprecedented accuracy to advance our knowledge of ocean circulation, which plays a crucial role in energy exchanges around the globe, sea-level change and Earth interior processes.

GEMMA’s Moho map is based on the inversion of homogenous well-distributed gravimetric data.

For the first time, it is possible to estimate the Moho depth worldwide with unprecedented resolution, as well as in areas where ground data are not available. This will offer new clues for understanding the dynamics of Earth’s interior, unmasking the gravitational signal produced by unknown and irregular subsurface density distribution.

GEMMA is being carried out by Italian scientist Daniele Sampietro, and is funded by the Politecnico di Milano and ESA’s Support To Science Element under the Changing Earth Science Network initiative.

This initiative supports young scientists at post-doctoral level in ESA Member States to advance our knowledge in Earth system science by exploiting the observational capacity of ESA missions.