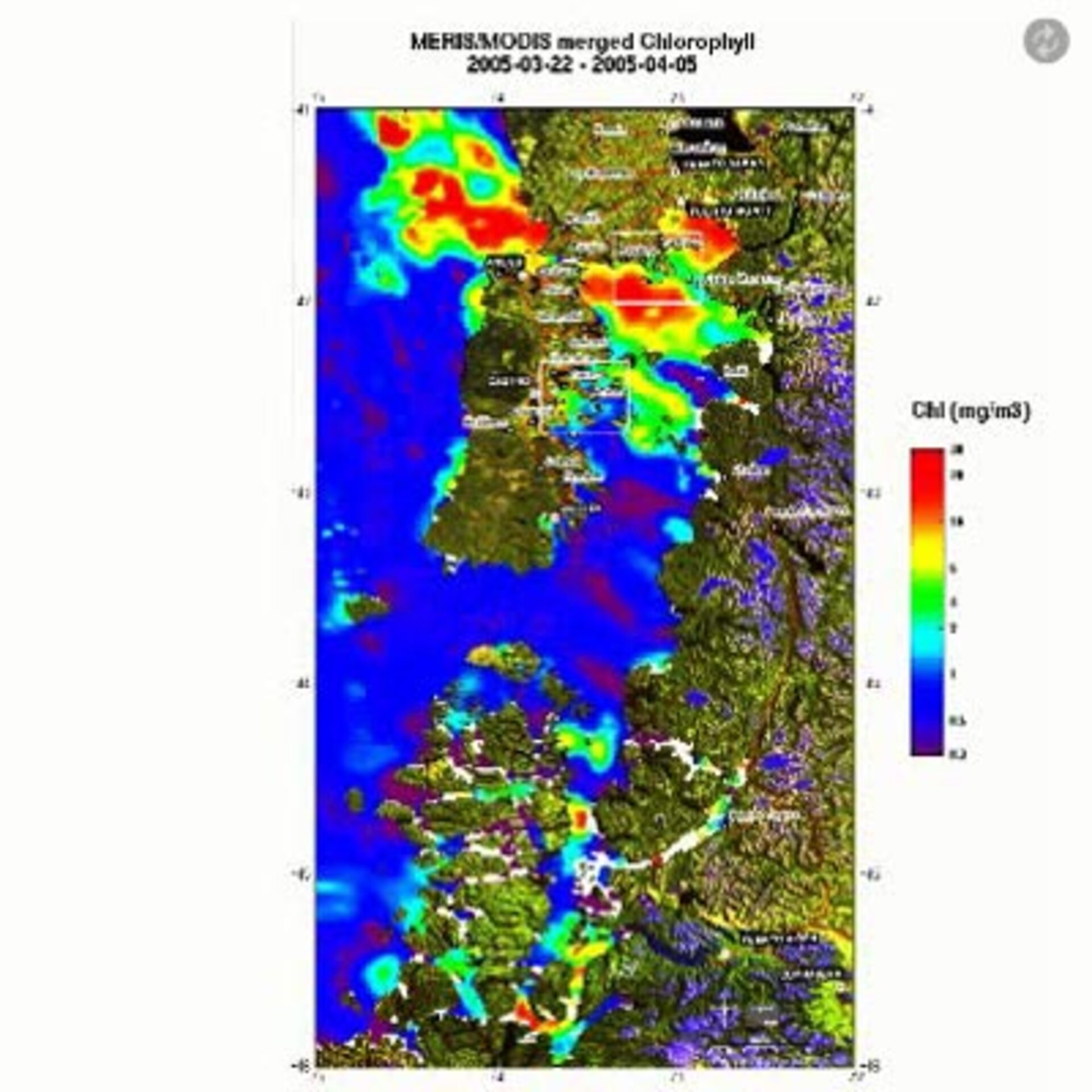 Chile is currently the world’s largest producer of farmed salmon and has a burgeoning mussel culture industry that is supplying a growing world market. However, the country’s marine aquaculture sector is vulnerable to Harmful Algal Blooms, which occur when some algae species producing poisons bloom rapidly in water, causing physical or biochemical damage to fish and shellfish.

Early detection of Harmful Algal Blooms (HABs) allows fish farmers to make timely key decisions in order to minimise the damage to aquaculture. To aid in this effort, a team led by Hatfield Consultants Ltd. (Hatfield), under the ESA-funded Chilean Aquaculture Project (CAP), has implemented an early warning service based on Earth Observation (EO) data, which delivers forecasts of potential HABs to aquaculture companies via a customised Internet portal.

HABs are a natural phenomenon that have increased in frequency over the last 30 years, causing millions of Euros worth of annual losses to the 360 fish farms found in the southern region of Chile. They deplete the concentration of oxygen in sea water, potentially killing larger caged fish such as salmon that cannot flee the affected area.

In the case of shellfish, such as mussels, toxins from the blooms accumulate in their body tissues and pose serious health risks for humans when consumed. For instance, in 2002 an HAB outbreak in Chile was responsible for 73 paralytic poisonings and two deaths. In 2004, more than 1500 cases of poisonings occurred resulting in an estimated 30 million Euro yearly loss. And in 2005, more than 10 000 cases were document, including one death.

Just like plants on land, algae employ green-pigmented chlorophyll for photosynthesis — the process of turning sunlight into chemical energy. The chlorophyll collectively tints the colour of the surrounding water, providing a means of detecting these tiny organisms from space with dedicated 'ocean colour' sensors onboard satellites.

The CAP project utilises a combination of near real-time EO data, such as chlorophyll-a pigment concentration, secchi transparency, suspended matter and sea surface temperature, derived from the MERIS instrument onboard ESA’s Envisat satellite and the MODIS instrument onboard NASA’s Aqua satellite and in situ water monitoring to monitor the Southern Ocean off the coast of Chile.

A hydrodynamic model, established and validated through the project, is also used to characterise the water circulation patterns in the major aquaculture area in southern Chile.

Aquaculture has become a capital-intensive industry in Chile, worth nearly 1 billion Euros a year with direct and indirect benefits for employment and other industries. The aquaculture industry in Chile and internationally has expressed great interest in the products and services developed under the CAP project. In particular, the HAB early warning service has been tested by Mainstream Chile, part of the Norwegian holding company CERMAQ, a world leader in salmon production.

Mainstream Group Development Manager Francisco Puga said: “The benefits of the CAP project are directly related to the operation of our company. The environmental monitoring and HAB detection is part of our daily operation procedures. Also, historical environmental information supports our strategic decisions for farm site location.

"To obtain the amount of information covered with the EO data, alternative methods will be of considerable higher cost. With in situ measurements you cannot produce a gradient map as obtained with EO images. The value of this information is the area and resolution obtained in a single didactic image."

Last month, the CAP project was presented at the AQUA2006 event organised by the World Aquaculture Society in Florence, Italy, triggering a lot of interest for EO-based information service in the aquaculture industry.