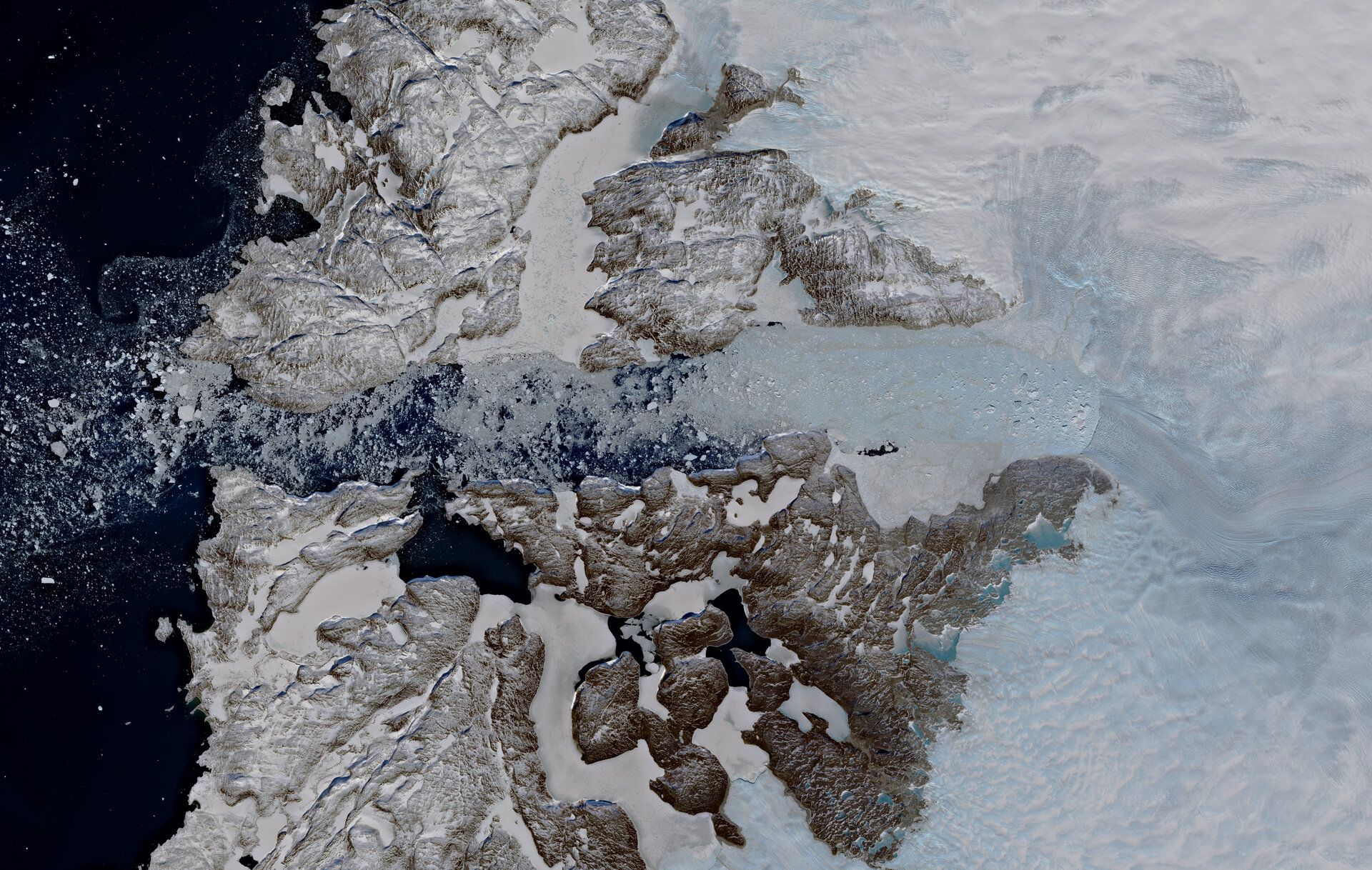 Our planet works in mysterious ways. We are all used to hearing about the world’s ice being the first casualty of climate change and, indeed, it is declining fast. However, recent findings show that one glacier is not conforming to the norm – it’s actually been flowing more slowly and getting thicker.

In recent years, Greenland has been losing more ice through the Jakobshavn Isbrae Glacier than from anywhere else on this huge ice sheet.

Various types of satellite data have been used to understand and monitor the glacier’s flow over the last 20 years, in particular, through ESA’s Climate Change Initiative. This revealed that the glacier was flowing at its fastest and losing the most ice in 2012–13. In places, the main trunk of the glacier was deflating by 10 m a year as it adjusted dynamically to ice loss and melting.

Complementary information from the European Commission’s Copernicus Sentinel-1 radar mission and Sentinel-2 optical mission along with ESA’s CryoSat satellite are currently being used to keep a close eye on this critical glacier.

In particular, scientists are applying a new swath processing technique to CryoSat’s altimeter data. This differs from conventional radar altimetry so that broad swaths, rather than single points, of elevations can be computed – yielding better detail on glacial change.

This new high-resolution dataset has revealed that, between 2013 and 2017, the ice at terminus of the glacier stopped decreasing in height, and started to thicken. The overall effect is that Jakobshavn Isbrae is now flowing more slowly, thickening, and advancing toward the ocean instead of retreating farther inland.

Even so, the glacier’s drainage basin as a whole is still losing more ice to the ocean than it gains as snowfall, therefore still contributing to global sea-level rise, albeit at a slower rate.

Scientists are discussing this phenomenon at this week’s Living Planet Symposium in Milan. Anna Hogg, researcher in the Centre for Polar Observation and Modelling at the University of Leeds in the UK, said, “The dynamic speedup of Jakobshavn Isbrae observed from the late 2000’s to 2013 was triggered by warm ocean waters in Disko Bay, entering Jakobshavn Fjord and melting ice at the glacier terminus. 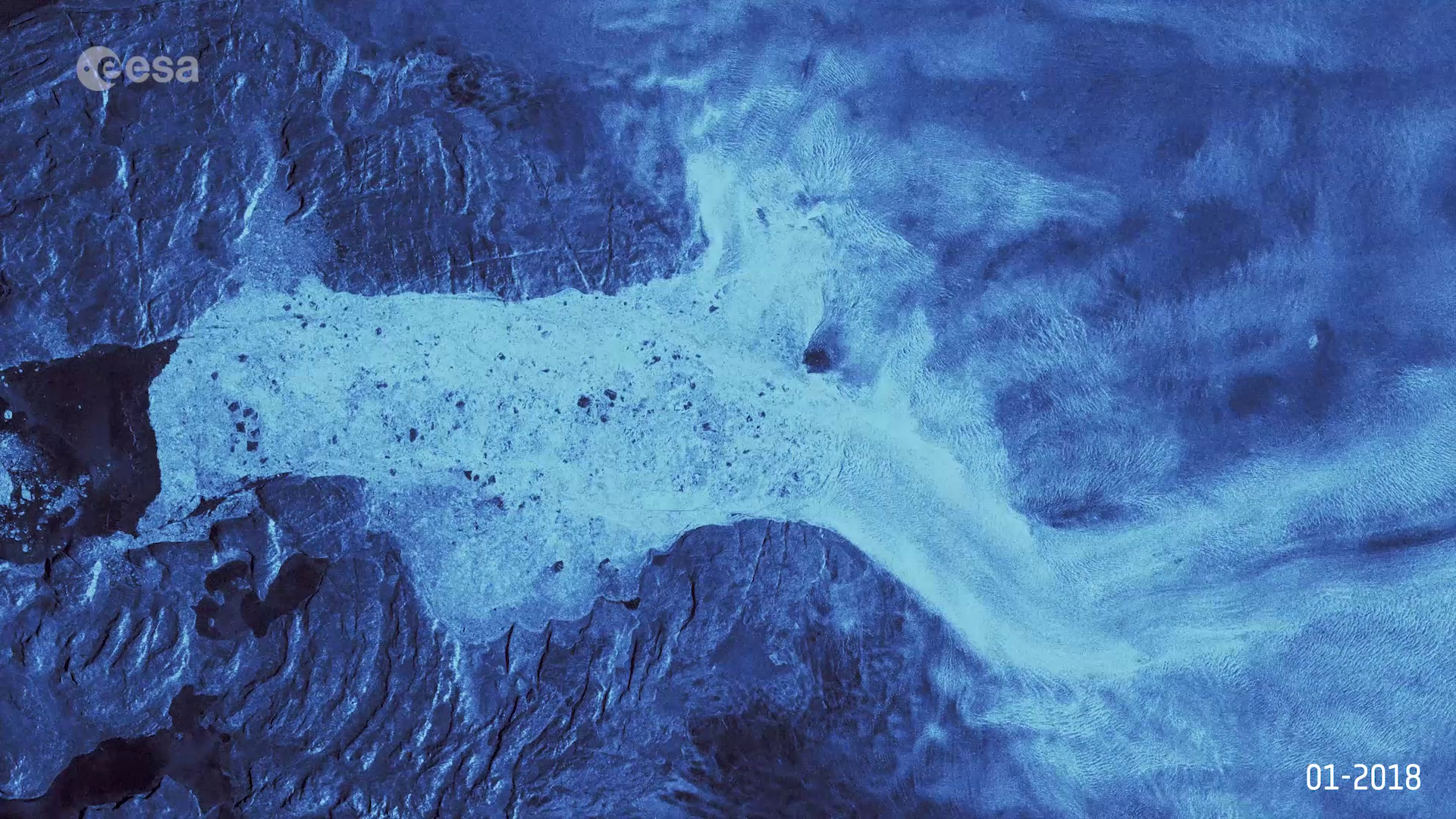 “In recent years, however, temperature measurements show that ocean water in Disko Bay has experienced a series of cooler years – more than one degree lower than mean temperature previously observed. This has reduced the rate of ice melt on Jakobshavn Isbrae.”

However, glaciers interact with both the ocean and the atmosphere. Following the extreme surface melt event across the whole of Greenland in 2012, the ice sheet experienced very low levels of surface melt the following year.

Research suggests that it is the complex interaction of both ocean and atmospheric forcing that have driven the changes on this glacier.

Dr Hogg added, “The key question we need to answer now is whether the slowdown of Jakobshavn Isbrae just a pause, or is it more permanent? We will use ESA satellite observations combined with models to monitor change and predict this colossal glacier’s future evolution.”

ESA’s Mark Drinkwater noted, “The balance of the cryosphere is clearly delicate, and we see large seasonal and year-to-year variability in the dynamics of the Jakobshavn Isbrae Glacier, which can easily hide the longer-term climate trend in ice loss.

“Further data is needed on the regional influence of ocean temperatures on tidewater glaciers in Greenland to better understand to what extent this process influences regional ice-mass losses.”