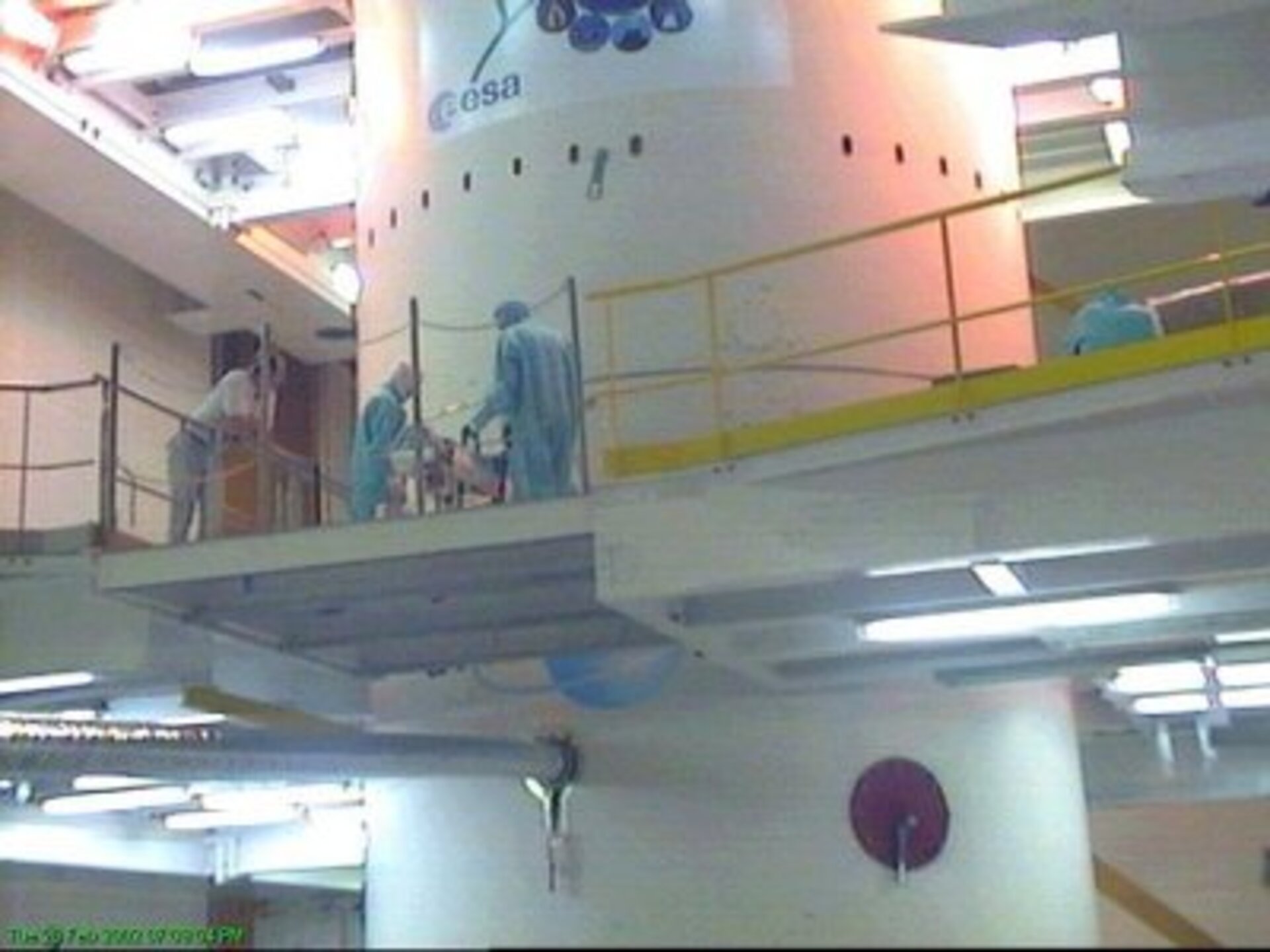 Envisat sits at the top of its Ariane 5 rocket, both of them within the cavernous Final Assembly Building (known by its French initials as BAF), awaiting the start of Wednesday’s rollout. Today [Tuesday] the satellite, completely obscured beneath its launch fairing, received its final physical contact with the outside world.

This afternoon a small hatch in the fairing was opened and an Astrium technician balanced on what they call a ‘diving board’ reached carefully inside. His task was to switch six ‘red tag’ safe plugs with an equal number of ‘green tag’ pyrotechnic arming plugs.

This procedure enabled continuity of the onboard circuits controlling the pyros. Once Envisat is safely in space a pre-programmed sequence begins and the pyros will be blown, to cut cables and sheer off bolts that lock Envisat mechanisms in place during launch such as the reaction wheels that help to control the spacecraft’s attitude.

‘This job is kept until last to minimise the chance of the pyros being activated in error,’ said Nigel Watts, ESA Product Assurance and Safety Manager for Envisat. Now this task is completed, there are no more mechanical activities to be done. This activity is part of the satellite countdown to launch that began today.

It all had to be done extremely carefully, for the safety of the workers and the spacecraft alike. As well as their usual clean suits, all technicians working in this area of the BAF have to carry gas masks, because the Envisat fuel tanks as well as the upper stage of the Ariane 5 are fully loaded with toxic hydrazine. The air quality inside the fairing was checked before the technician could be allowed inside it.

He, like all the other personnel in the area, wore an electro-static discharge bracelet on his wrist. These devices guard against the risk of static discharge, which might damage the spacecraft’s delicate electronics, or maybe even cause any leaking hydrazine build-ups to explode. For the same reason the technician’s wristband was attached by cable to the spacecraft once he gained access, to electrically ‘ground’ him to it.

Before the technician could gain access to the fairing interior, a plastic sheet was taped down underneath where he’d be working, to prevent anything falling and potentially causing damage. As an extra precaution all the tools he used, like those of the others around him, were all strapped to his wrist so they could not be dropped.

The work itself was based on a meticulous checklist: once all the safe plugs were removed each pyrotechnic circuit was tested for correct voltage and resistance. And then, each arming plug was only screwed onto the circuit after it was given a final visual inspection. After another check of the completed work the covering panel was screwed on and the entire section was covered - like the rest of the spacecraft – with reflective Mylar blanketing to insulate it from the rigours of space.

Finally, some five hours after the operation began, the fairing hatch was resealed and Envisat was shut away from the world once more. The next time the satellite sees the Earth it will be hurtling far above its surface at seven kilometres a second.