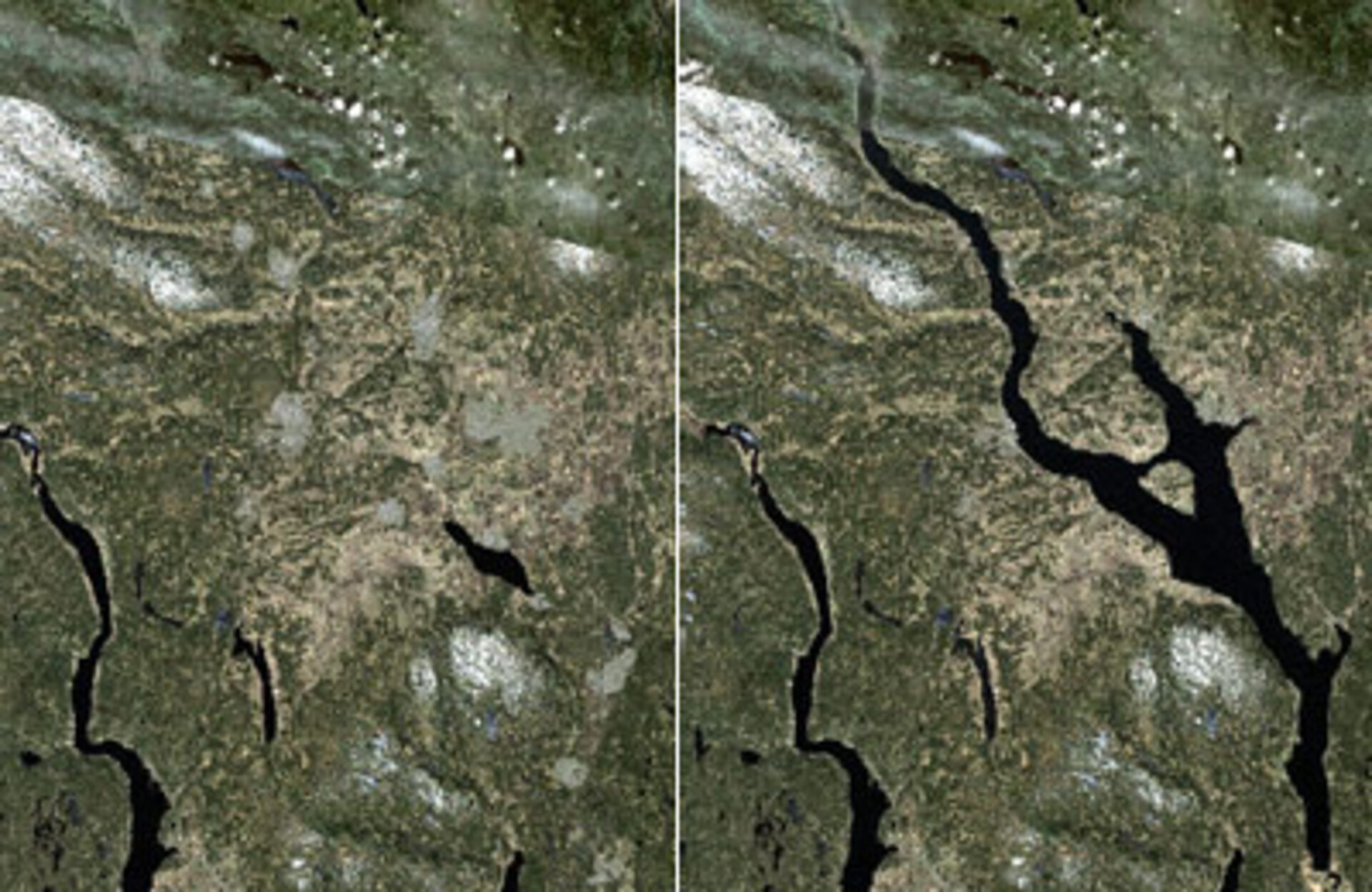 Even as Thursday’s Salzburg Envisat Symposium discussed the increasingly prominent role of Earth Observation in disaster relief, Envisat played a key part in a multinational emergency exercise taking place hundreds of kilometres to the north.

When is a flood not a flood? For the duration of the International Humanitarian Partnership’s Triplex 2004 exercise, taking place in Norway this week, humanitarian aid groups are taking part in a scenario where the country’s southern Lake Mjǿsa is in fact a flood zone in the imaginary country of ‘Innlandia’, inundated by a combination of heavy rainfall and a neglected dam that has given way.

Within the context of the exercise, 100 000 people have been affected by the disaster, with 1000 people stranded on an island – actually the real semi-island of Helgǿya - needing assistance and evacuation.

In this imaginary setting, real international aid groups arrive to give help, with participants including Norway’s Directorate for Civil Protection and Emergency Planning, the United Nations High Commissioner for Refugees, the UK’s Department for International Development and the International Red Cross.

More than 350 people from 20 different organisations have gathered at the Starum Civil Defence training centre to take part in the Triplex exercise and at the centre of their activities is an image from Envisat.

“We have supplied the participants with a damage assessment map based on an Envisat Advanced Synthetic Aperture Radar (ASAR) map acquired on Tuesday,” explained Einar Bjorgo of UNOSAT, an organisation that procures satellite imagery for United Nations organisations, supported by ESA through its Earth Observation Market Development (EOMD) Programme.

“Working in cooperation with our partners MapAction, we overlaid a previously prepared pre-disaster simulated image with the ASAR-derived lake area, preparing a damage assessment map for distribution and use in the field during Triplex.”

Use of satellite imagery to coordinate disaster relief is hardly limited to training exercises, as Symposium participants have learnt. UNOSAT and MapAction are both partners in the RESPOND consortium, an ESA-backed project to supply satellite-based geoinformation products to humanitarian users.

RESPOND is part of the initial suite of operational services of the joint ESA-European Commission’s Global Monitoring for Environment and Security (GMES) initiative, supplying users that include the German Red Cross with data supporting their activities in the Darfur region of Sudan and also flood-hit Bangladesh.

Another partner in RESPOND is SERTIT, a technology transfer company linked to the University of Strasbourg. Jean-Baptiste Henry of SERTIT briefed the Symposium on their development and operation of a Rapid Mapping Service for disaster management, supported by ESA’s EOMD.

“We make use of imagery from all available satellites including Envisat and Spot-5” said Henry. “Our aim is to make the final map products available no more than 12 hours after data acquisition, for use during the crisis, post-crisis and prevention stages of an emergency.”

On call 24 hours a day, seven days a week, the service has a particular focus on flood monitoring and its users include the French Eastern Zone Civil Defence Headquarters as well as insurer Swiss Re, interested in the service’s rapid damage assessment utility.

In January 2002 the Rapid Mapping Service produced daily flood extent maps when the River Meuse burst its banks, supplying the French Civil Protection Agency with new products every night for five days until the flood ebbed, using a combination of ERS, Spot and Radarsat data.

During the central European flooding of August 2002, Envisat Advanced Synthetic Aperture Radar (ASAR)’s alternating polarisation capability proved well able to map the flood extent of the River Elbe as it covered the centre of Dresden and surrounding countryside.

Henry also explained how, on behalf of the French space agency CNES, SERTIT also carries out rapid mapping in support of activation of the Charter on Space and Major Disasters - an international agreement of space agencies putting Earth Observation resources at the disposal of civil protection authorities responding to natural disasters worldwide.

“SERTIT has participated in 17 Charter actions to date,” Henry said. “Most recently was last month’s activation triggered by wet-season flooding in the Darfur region of Sudan, making accessibility difficult for groups delivering humanitarian aid. Radar imagery shows the road network well, and could also be used for water surface and wadi channel mapping. The final product was a detailed map that also highlighted the location of refugee camps.”

Canada has seen two Charter activations since the start of 2003 – one for forest fires occurring in British Columbia - and Ian Becking of the Government of Canada Operations Centre talked about Earth Observation data from the user’s point of view.

“The biggest single need to be fulfilled during an emergency is overall geographical awareness,” Becking said. “What did the affected area look like before and what does it look like now?”

He described the Charter as a 'good start' in operational terms, and stressed the need for regular exchanges of information between emergency managers and space scientists, to spread the word about what Earth Observation can do.

Echoing Monday’s declaration from ESA’s José Achache, Earth Observation Programmes, that “the mission is not over until data has been delivered”, Machiko Louhisuo of Finland’s VTT Technical Research Centre outlined a radar-based disaster monitoring system designed to rapidly get information to all those users requiring it.

Developed jointly with Japan’s National Research Institute for Earth Science, the system is intended to fill the perceived gap between geographical information system (GIS) technology and mobile communication systems, so that georeferenced satellite imagery could serve as a basis for risk and evacuation route maps distributed to citizens via GPS-enabled mobile phones and in-car navigation systems, as well as through the internet.

Other presentations recounted intriguing research on how radar imagery can be used for rapid urban damage assessment in the wake of earthquakes, and how Envisat optical and radar data are being used in conjunction for flood mapping and advance prediction in France and China - part of ESA’s Dragon Programme with the Chinese Ministry of Science and Technology.

Research on satellite-based oil pollution detection was also presented, along with information on ESA’s current work as co-chair of the Integrated Global Observing Strategy’s Geohazards Theme, a move by a partnership of international bodies concerned with environmental change issues, to forge a joint strategy for more effective mitigation of geological hazards including earthquakes, volcanic eruptions and landslides.