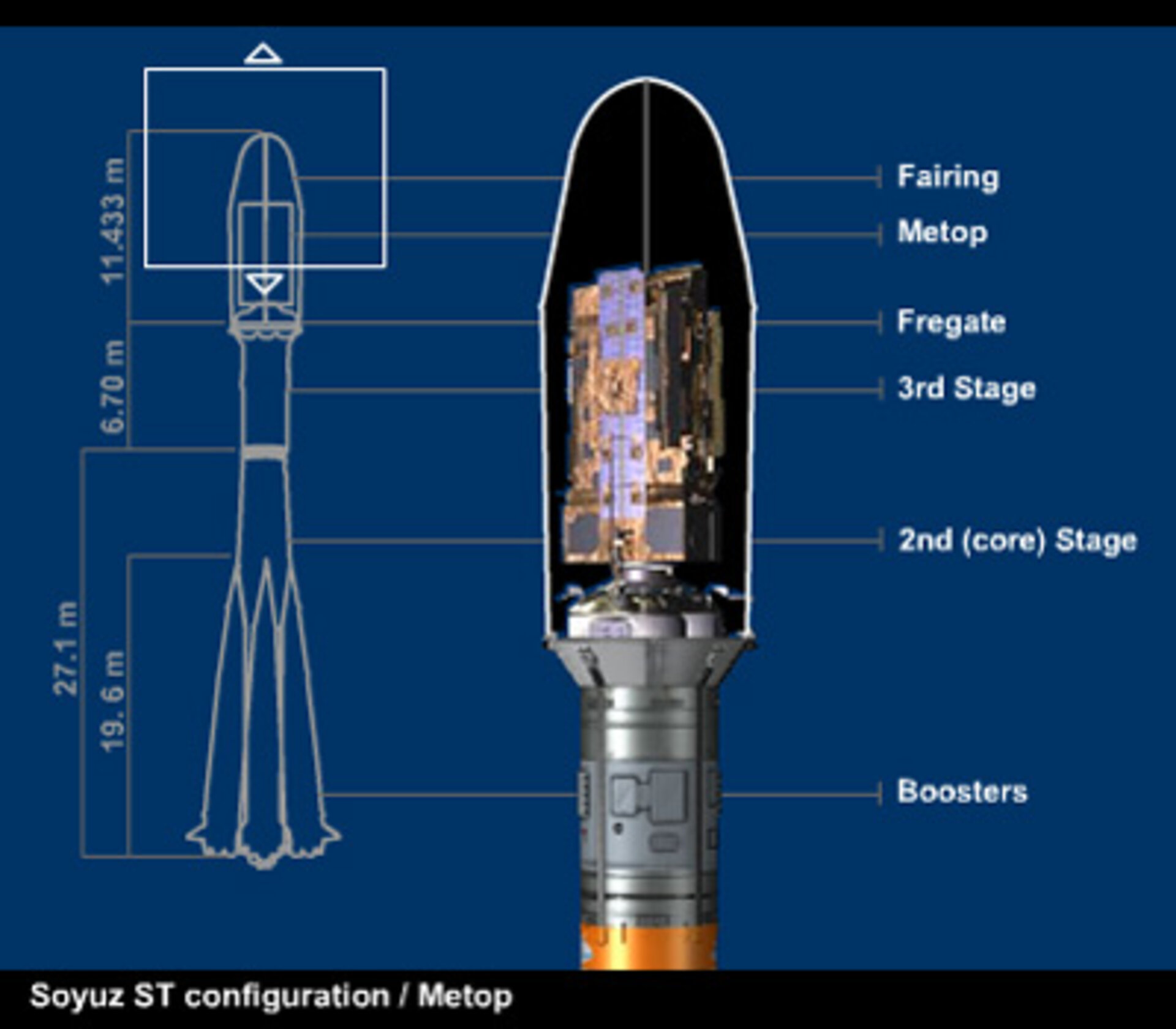 The Soyuz rocket was first used in November 1963 and since then it has been the workhorse of Russia’s manned and unmanned space programme.

It has performed more than 1800 missions – also regularly supporting operations of the International Space Station, and it is one of the most reliable launch vehicles in the world.

The four side boosters (Stage 1) and the central core (Stage 2) ignite at the same time before lift off. After the first stage has used all its fuel it separates and the second stage continues to burn. All three stages use liquid oxygen and kerosene fuel.

For MetOp launches, a fourth stage, known as Fregat, is also used. Its main engine is ignited twice to raise the satellite orbit around the Earth to a nominal 820 km. The Fregat uses hydrazine (UDMH) and nitrogen tetroxide as fuel. It is capable of up to 12 restarts.

The launcher for MetOp is the Soyuz/ST, which is an enhancement to the basic Soyuz launch vehicle.

The Fregat is a fourth stage which has been under development by NPO Lavotchkin since 1992. Its first qualification flight was in January 2000. Although the Fregat is relatively new, each individual component has successfully flown many times.

A dynamic new phase began at Europe's spaceport in French Guiana with the first launch of a Soyuz rocket in October 2011. This historic event was the first time that a Soyuz launcher had lifted off from anywhere other than Baikonur, in Kazakhstan or Plesetsk, in Russia.

The launch site is almost identical to the other Soyuz sites, although adapted to conform to European safety regulations. The most visible difference is a mobile gantry, which allows payloads to be installed on the launcher vertically. The gantry provides a protected environment for the installation of payloads, as well as for the checkout of fully integrated vehicles.

The Soyuz launch vehicle that is used at Europe’s Spaceport is the Soyuz-ST, including the Fregat upper stage and the ST fairing.

The third and final MetOp satellite, MetOp-C, lifted off from here on a Soyuz on 7 November 2018.

The Baikonur Cosmodrome is located at 45.6°N latitude and 63.4°E longitude in the flat grasslands of Central Asia in the former Soviet Republic of Kazakhstan. The area has a continental climate, with long, cold winters and hot, dry summers.

Construction of the secret missile site began in 1955. The first artificial satellite, Sputnik 1, and first human in space, Yuri Gagarin, were launched from Baikonur. All subsequent Russian manned missions have lifted off from there, as well as geostationary, lunar, planetary, and many ocean surveillance missions.

Until recently, the name Baikonur was misleading. The former Soviet Union used the name and co-ordinates of a small mining town, Baikonur, to describe its secret rocket complex. This was done intentionally to hide the true location of the launch complex. In fact, the launch complex is about 230 miles south-west of Baikonur town, near the railway station and village of Tyuratam and close to Leninsk city. However, in 1998, Leninsk city was renamed Baikonur city.

The first two MetOp spacecraft were delivered to the cosmodrome by air and integrated with the Fregat stage inside a modern payload processing facility.

The strap-on boosters and stages of the Soyuz booster are assembled horizontally in the large Vehicle Assembly Building. The entire launch vehicle, with its payload, is then transported by rail to the launch pad, where it is vertically erected over a large flame deflector pit.