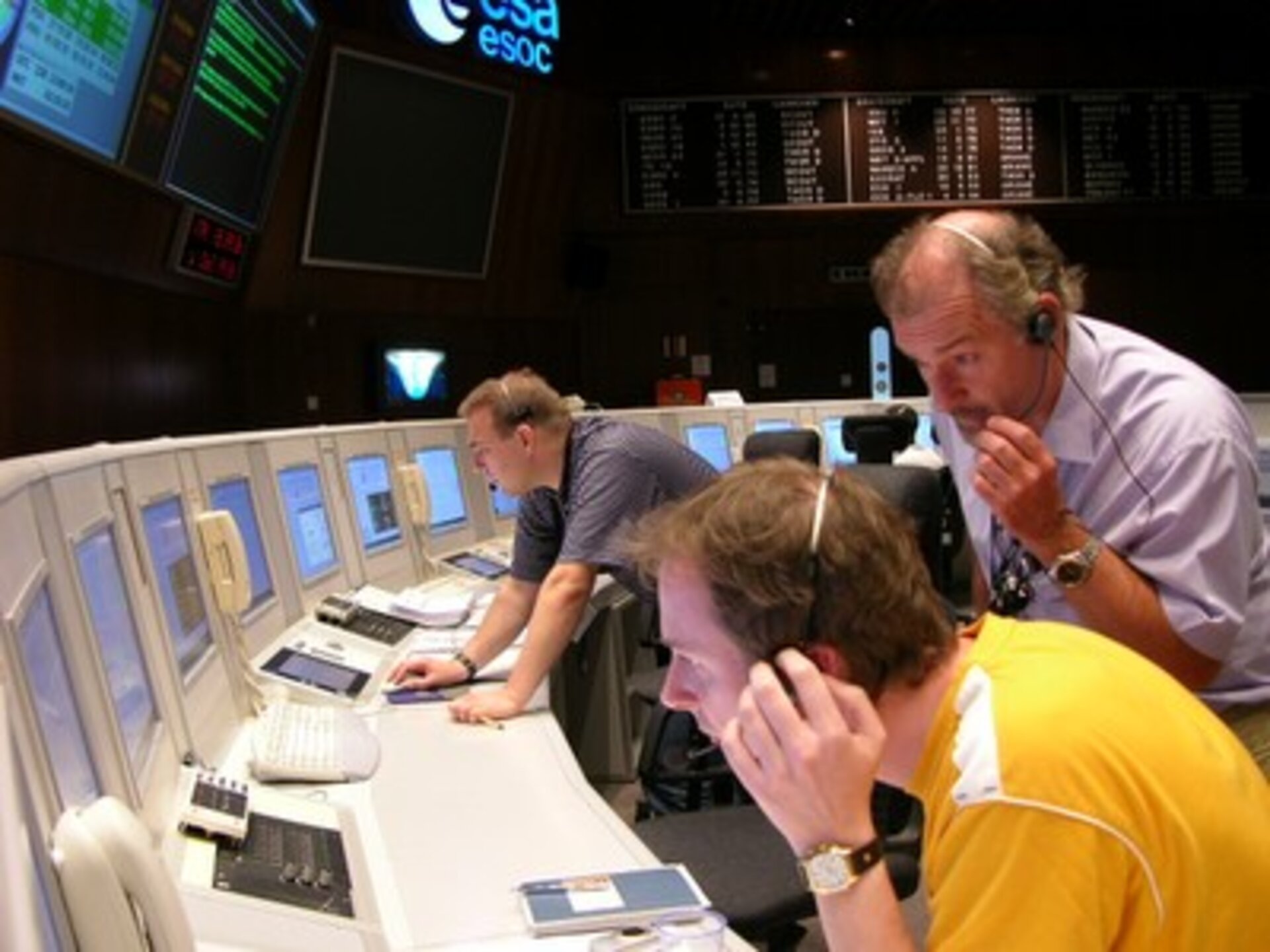 Mission controllers and launch engineers at ESA's Space Operations Centre are in high gear for the launch of slated for 23:33 CET, 21 December 2005. ESOC is providing expert Launch and Early Orbit Phase flight control services to the weather satellite's owner, shepherding the new spacecraft through the critical first few days of operations.

"It's a delivery service, pure and simple," says Nigel Head, co-Flight Operations Director at ESOC for the launch of MSG-2, Europe's second Meteosat Second Generation (MSG) weather satellite. "We provide the technical expertise for our customer and see the spacecraft through several critical activities during the immediate post-launch period," he says.

The post-launch period is referred to universally by spacecraft controllers as 'LEOP', for Launch and Early Orbit Phase, and is a one of the numerous specialties regularly practised at ESOC.

After launch on an Ariane 5 launcher from Kourou, French Guiana, then LEOP controlled by ESOC, the satellite will be handed over to its owner, EUMETSAT, the European Organisation for the Exploitation of Meteorological Satellites, and renamed Meteosat-9 for routine weather reporting operations.

The spacecraft will be used for routine weather reporting operations. Its main instrument is the SEVIRI Spinning Enhanced Visible and Infrared Imager, used to generate frequent images of Earth's cloud cover and atmospheric conditions; the satelitte also carries GERB, a highly accurate radiometer aimed at monitoring the Earth's radiation budget.

What are the critical activities during LEOP?

It varies from mission to mission, but for MSG-2, mission control engineers will watch extremely closely during the three larger and one smaller engine burns needed to boost the cylindrical, 2-tonne spacecraft into geosynchronous orbit. Once in final orbit, the satellite will appear to stay over the same spot on the Earth's surface at some 35 800 km altitude and 0 degrees longitude over the Gulf of Guinea.

"We will also conduct several critical payload operations, including switching on the SEVIRI imager and releasing two protective covers, one over the optics and the second covering the radiator," adds John Dodsworth, co-Flight Operations Director for MSG-2. He explains that the imaging mirrors also have to be decontaminated. "This all has to happen rather quickly, or else performance could be affected," he says.

Two experienced mission control engineers are sharing the workload for MSG-2's LEOP overseeing the 'A' and 'B' sections of the mission control team (MCT), an arrangement made necessary by the requirement to staff ESOC's Main Control Room and monitor MSG-2 24 hours per day during LEOP, scheduled to end on 2 January 2006.

The MCT is comprised of some 35 engineers and scientists, who are directly involved with operating the spacecraft. These include spacecraft engineers with specialities in data systems, telemetry and telecommanding, onboard power systems and flight operations, among others. In addition, some 25 additional staff from ESOC, ESA's European Space Research and Technology Centre (ESTEC), EUMETSAT and the satellite's contractors will provide support during LEOP.

Mission control team members have been engaged in training campaigns and finalising the mission control software and systems for most of the past year. "We built a robust mission control system, but of course we did not have to extend this to include mission scheduling, data transfer or other routine phase activities as these will all be handled by EUMETSAT after handover," says Dodsworth.

The team was, in fact, ready for launch on two earlier occasions, but the launch was delayed by the need to schedule a co-passenger satellite onboard the Ariane 5 launcher. INSAT 4A, a telecommunications satellite owned by the Indian Space Research Organisation, will ride into space with MSG-2.

As of last week, the pre-launch operations readiness review had been completed, the mission control system was 'frozen' to preclude any further changes in software or procedures, and the flight operations directors were planning the final simulation exercise. A full rehearsal, with all mission controllers, engineers and support personal on console, or at work stations and available, is planned for 16 December.

Once handover is complete, most personnel working on MSG-2 at ESOC will return to the missions and activities from which they were borrowed for the launch and LEOP.

ESOC also provided LEOP services for MSG-1, launched on 28 August 2002. This series of launches has allowed ESOC to further refine its capabilities as a centre of excellence for flight control, LEOP activities and the development of mission control systems and applications.

Meteosat Second Generation (MSG) is a joint project between ESA and the European Organisation for the Exploitation of Meteorological Satellites (EUMETSAT) and follows up the success of the first generation Meteosat weather satellite series with a larger design boasting higher performance. The first in a planned series of MSG satellites was launched in 2002, entering into service with EUMETSAT in early 2004 and now renamed Meteosat-8.