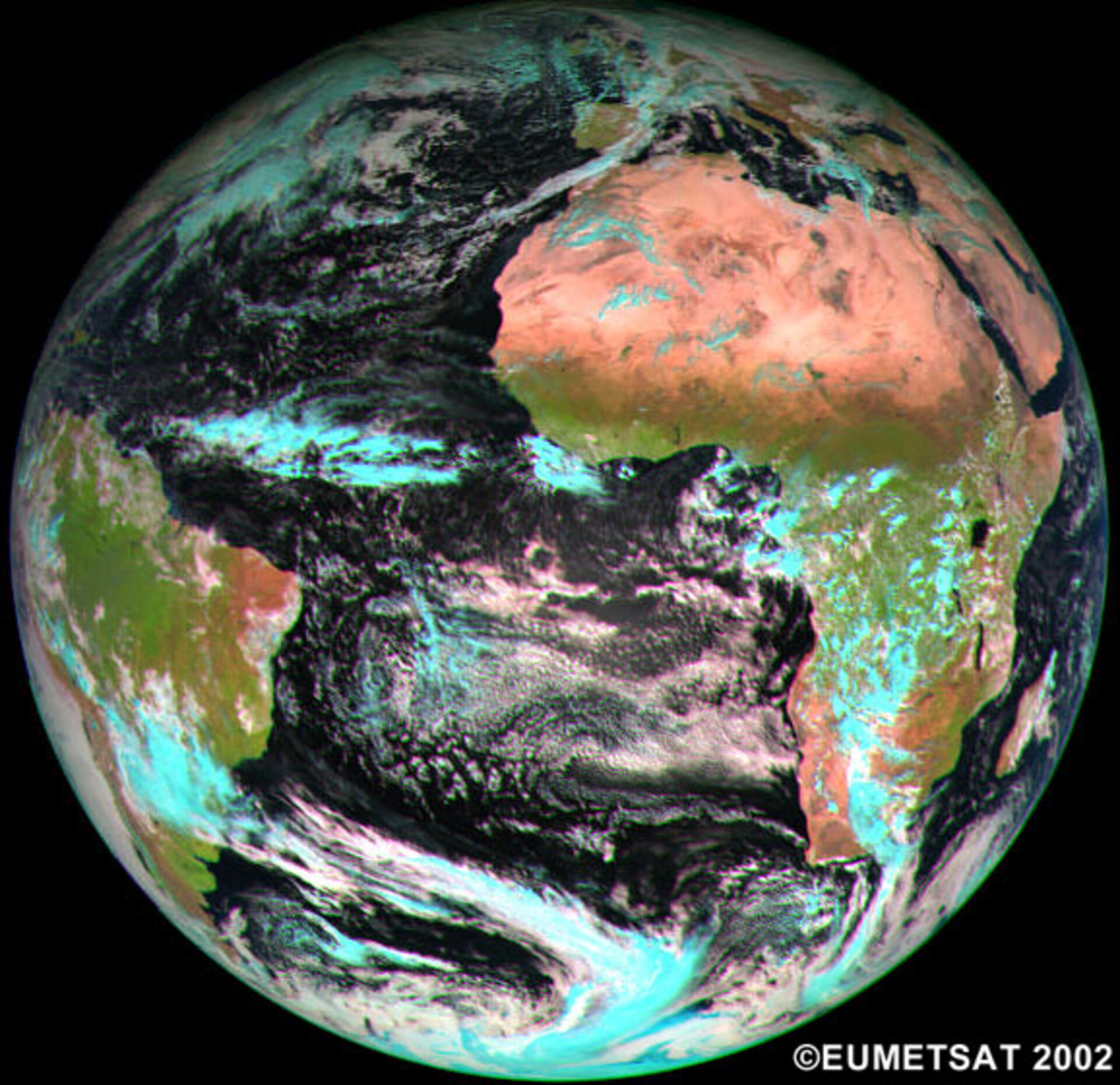 This dramatic image of the Earth is the first from the Meteosat Second Generation (MSG-1) satellite, launched 28 August.

This image is a colour composite derived from three of the twelve channels operating in the visible and infra-red parts of the spectrum used by MSG’s main instrument, the Spinning Enhanced Visible and Infra-red Imager (SEVIRI).

The MSG-1 spacecraft, currently located at 10 deg West for its initial commissioning phase, will be moved later to its final location to begin full operation.

For weather forecasting and other meteorological purposes, imagery should first be geometrically and radiometrically corrected. This uncorrected image, acquired 28 November 2002 by Eumetsat, already clearly shows the desert and vegetated areas on the African and South American continents, as well as overcast regions with distinct ice and water clouds.

It is fitting that the first image from MSG-1 should come at this time, just a few weeks after the 25th anniversary of the launch of ESA’s first meteorological satellite, Meteosat-1, on 23 November 1977.

Launched from the Guiana Space Centre, Europe's spaceport at Kourou, French Guiana on a European Ariane-5 launcher, MSG-1 is the first of a new series of meteorological satellites. The MSG series will take images at more wavelengths and at shorter intervals than its Meteosat predecessors. This enhanced capability makes MSG particularly suitable for short-term forecasting of sudden troublesome weather phenomena, such as snow, thunderstorms and fog.

TV weather bulletins will be able to provide clearer images on our screens and sequences of cloud development will be smoother and more realistic. The improved images will allow meteorologists to provide more accurate medium and short-term weather forecasts.

MSG is a joint project between ESA and Eumetsat, the organisation formed in 1986 to establish, maintain and operate a European system of meteorological satellites. Three MSG satellites are planned at present, as well as a ground segment. ESA is responsible for designing and developing the first satellite, and for procuring the other two on behalf of Eumetsat. In turn, Eumetsat is responsible for defining the payload based on user needs, procuring the ground segment and launchers, and operating the system.

With the launch of MSG-2, at any one time, two MSG satellites will be functional in geostationary orbit, the operational one being at 0 degrees longitude which is above equatorial west Africa, the other on stand-by with 10 degrees of separation. MSG-3 will be built and put in storage until it is required to take over as MSG-1 nears the end of its life. Each satellite will have a nominal seven-year lifetime. A fourth MSG satellite of the same design is foreseen to ensure continuity of service until the end of the next decade.