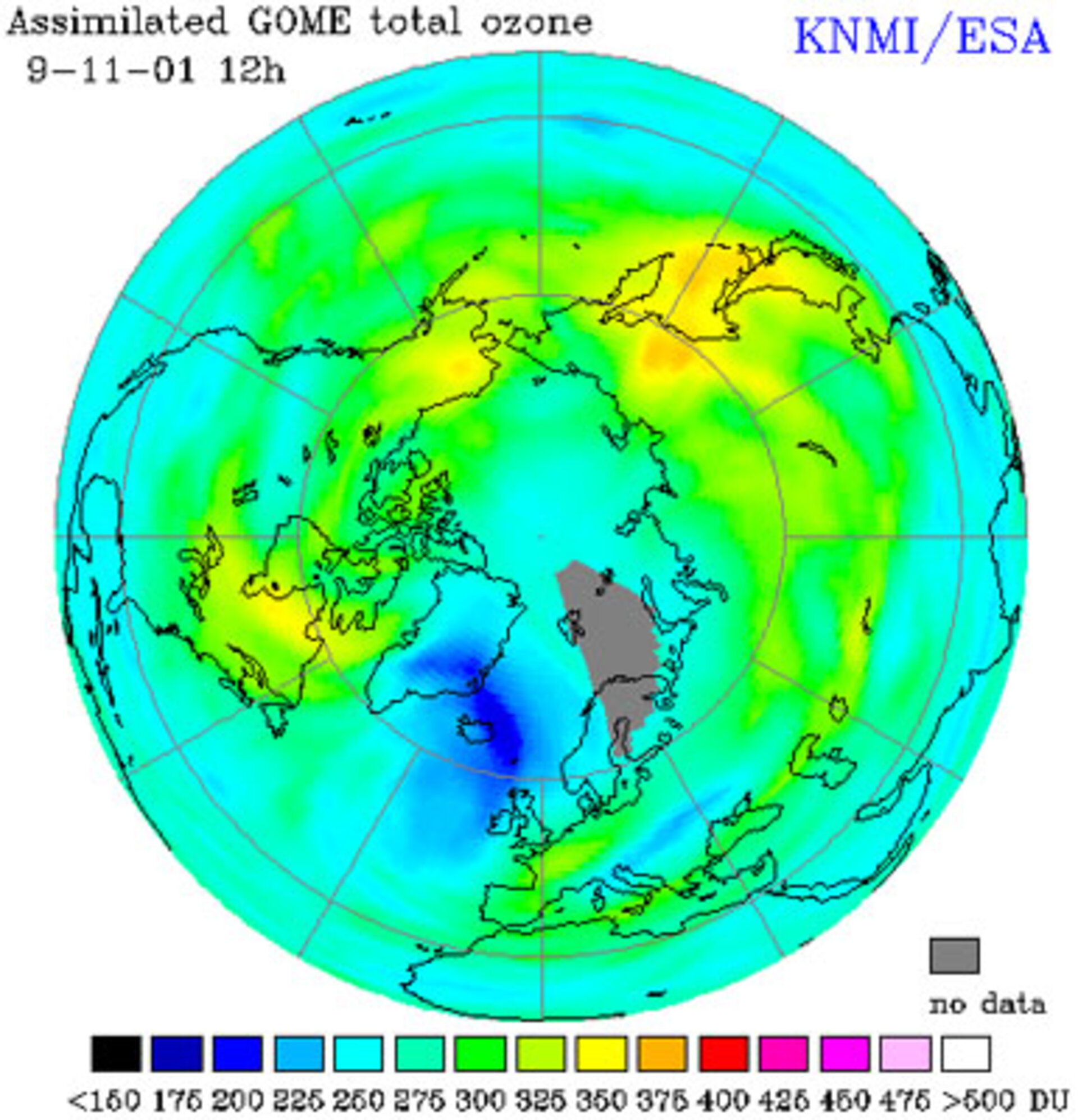 Scientists at The Netherlands' KNMI in cooperation with ESA are tracking an mini ozone hole opening over the North Atlantic and heading for Europe. The KNMI scientists predict that the mini hole will see ozone levels fall to 60-70% of the seasonal average as it sweeps from Greenland to southern Scandinavia over the next few days.

KNMI's unique GOME Fast Delivery Service, developed under the ESA Data User Programme, harnesses near real time processing of data from the GOME instrument aboard ERS-2. The scientists are able to monitor the loss of ozone in the atmosphere, and watch the mini hole as it moves and deepens hour by hour, in real time.

Ozone helps to shield the Earth's surface - and skiers or sunbathers - from the harmful ultraviolet light rays of the sun. This mini ozone hole does not present a significant threat, though. According to Ankie Piters at KNMI, "At this time of the year at our latitudes, the sun does not rise high enough above the horizon to deliver a significant amount of harmful ultra-violet light, but low ozone events over Europe are still of great interest. They seem to be caused mainly by unusual air currents in the atmosphere, not by chemical breakdown of ozone, which is what you see in the development of the Antarctic ozone hole."

The significance of this event is that the measurements of the GOME instrument processed in near real-time enable detailed monitoring and analysis of this phenomenon. For the first time scientists are able to forecast such an event.

"GOME is a spectrometer which scans the atmosphere below the flight path of the ERS-2 satellite," explains ESA's Claus Zehner. GOME gathers sunlight backscattered by the atmosphere and reflected by the earth's surface and analyses its spectrum from ultra-violet to infra-red. Different chemical "species" absorb specific wavelengths of light, so their presence shows up as absorption lines in the measured GOME spectra.

Europe is already preparing the next generation of satellite instruments to improve the monitoring of ozone and other key chemicals in the atmosphere. The SCIAMACHY (SCanning Imaging Absorption spectroMeter for Atmospheric CartograpHY) instrument onboard ESA's environmental satellite Envisat will continue the GOME series of ozone measurements soon. And ESA and the European Organisation for the Exploitation of Meteorological Satellites, EUMETSAT, are preparing a series of three satellites (Metop) which will carry follow-on GOME instruments and will guarantee at least ten years continued monitoring of ozone from space from 2003 onwards.