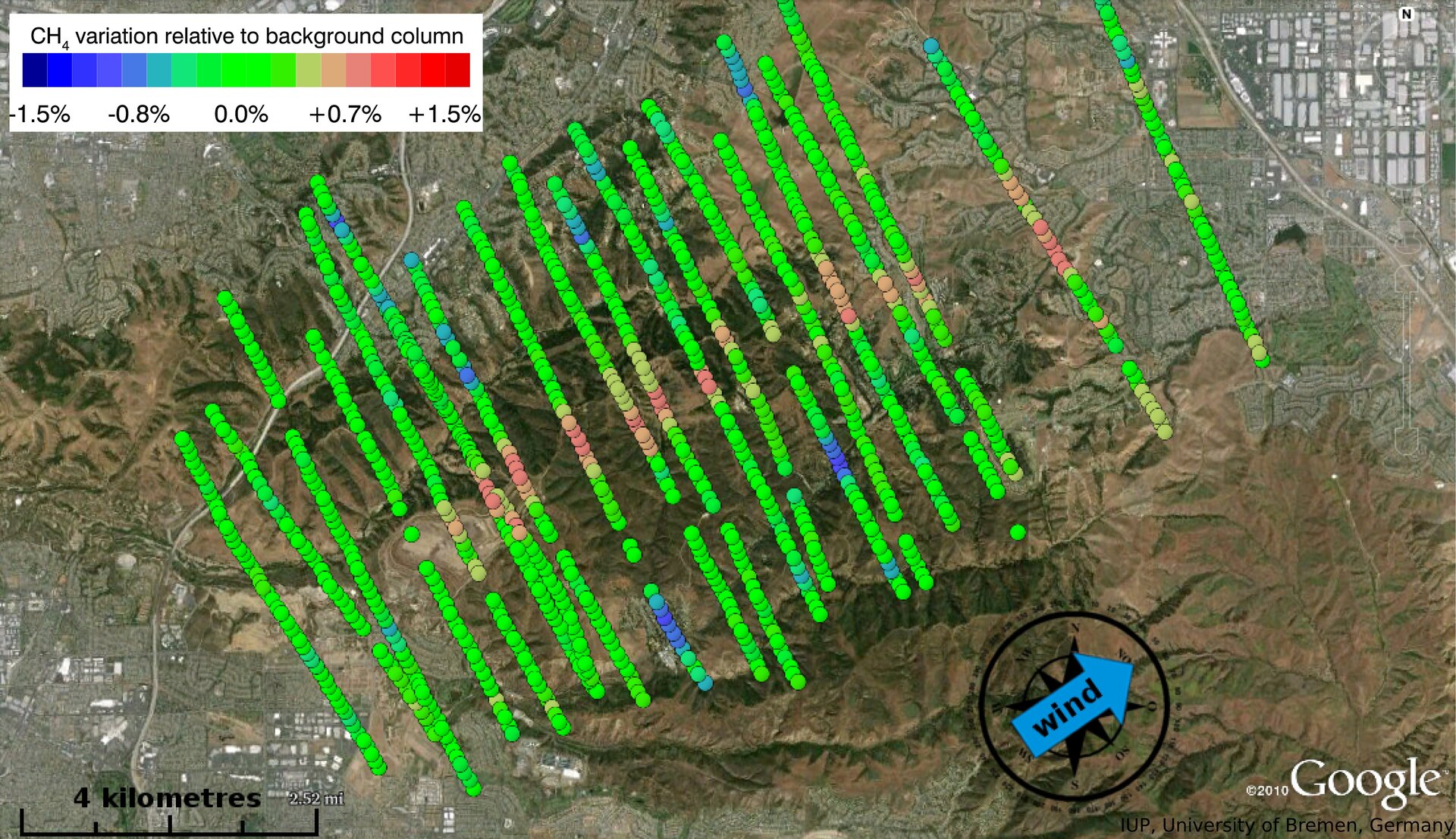 Scientists met in California this summer to test new methods for measuring greenhouse gases. This joint effort helps to show how ESA’s CarbonSat candidate satellite mission could identify sources of carbon dioxide and methane and how they disperse in the atmosphere.

CarbonSat is a candidate for ESA’s eighth Earth Explorer mission.

The concept is based on very detailed spatial imaging using an absorption spectrometer – an innovative approach for measuring these two strong greenhouse gases.

This novel technique could lead to a better understanding of the sources and sinks of carbon dioxide and methane, and untangle natural and anthropogenic sources.

As part of the CarbonSat’s development, field campaigns are carried out using airborne sensors to test the measuring concept.

By joining forces, ESA and NASA carried out the recent Comex campaign that not only supported CarbonSat but also NASA’s proposed Hyperspectral Infrared Imager, Hyspiri, mission.

“Our understanding of methane emissions from many important sources remains very poor,” said Ira Leifer, the US Comex principal investigator.

“For example, a recent review of many field studies over the last decade for North America concluded that official inventories consistently underestimate actual methane emissions.”

The campaign exploited passive remote-sensing spectroscopy – the unique absorption signature that the gases leave in sunlight as it passes through the atmosphere. Measurements are taken from aircraft above, as would the satellite, and compared to other measurements taken by aircraft and on the ground near the source of emissions.

The measurements were taken in the San Joaquin Valley and around Los Angeles in California, USA – an area that features oil refineries, farms and landfill sites, which all release methane into the atmosphere.

The team equipped a Twin Otter aircraft with the Mamap spectrometer which can measure carbon dioxide and methane plumes with high sensitivity and an accuracy similar to CarbonSat. Mamap was developed by Germany’s University of Bremen in cooperation with the GFZ Research Centre for Geosciences.

The flights were complemented by another aircraft that carried NASA’s next-generation Aviris spectrometer and its predecessor Aviris classic, which can detect methane at a higher spatial resolution than Mamap.

“The dataset will demonstrate the power of remote sensing to study global greenhouse gas emissions with this measurement technique.”

Heinrich Bovensmann from the University of Bremen, the Comex principal investigator and the proposer of the CarbonSat mission, noted, “Beside collecting important datasets to better estimate greenhouse gas emissions, data from the Comex campaign will also demonstrate synergies between CarbonSat and next generation of hyperspectral sensors.”

Results from the campaign will be fed into ESA’s report for the selection of Earth Explorer 8.

The FLEX mission, which aims to quantify vegetation fluorescence, is being studied in parallel as a candidate for the next Earth Explorer. A decision on which mission will go forward will be made next year.