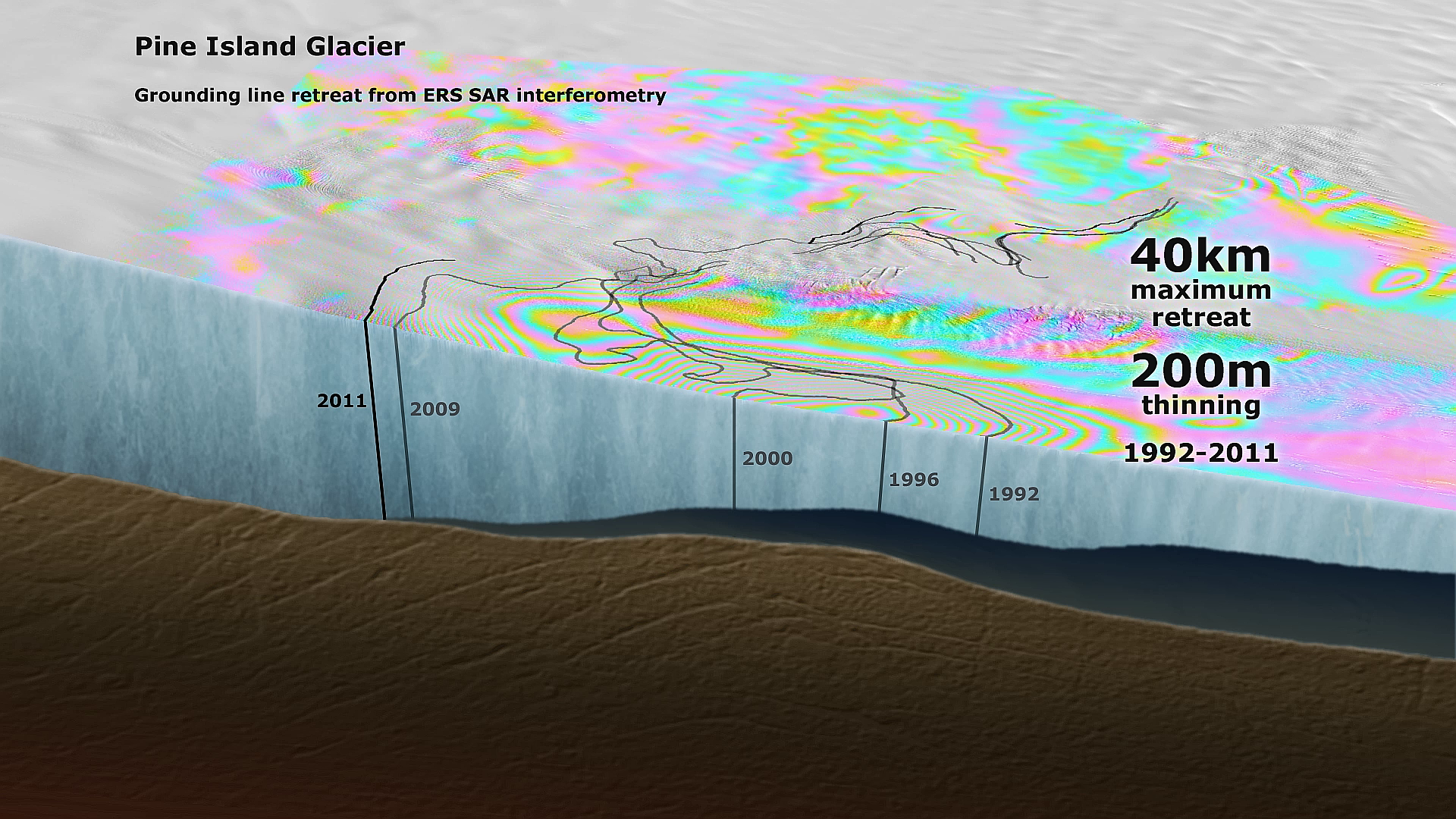 Twenty years of radar coverage from ESA satellites have been used to measure the rapid thinning of Antarctica’s Pine Island Glacier – and it’s losing more ice than previously thought.

Pine Island is the largest glacier in the West Antarctic Ice Sheet and one of the fastest ice streams on the continent. About a tenth of the ice sheet drains out to the sea by way of this glacier.

At the margins of ice sheets, ice lifts off of the land and floats out over the water as an ice shelf. Measuring these ice shelves and following their evolution is important for pinpointing the mass of an ice sheet and its contribution to changing sea levels.

But measuring them is difficult. Drilling and submarine surveys can be performed locally, but do not provide the continuous and global measurements needed for accurate monitoring.

Satellites can gather information frequently and over large areas, providing an effective means to quantify the melting of ice shelves. Radars on satellites can ‘see’ through clouds and in the dark, making them particularly suited for measurements over polar regions prone to bad weather and long periods of darkness.

During the course of 20 years, the orbits of ESA’s ERS satellites were occasionally modified to make more frequent measurements over the polar regions. Although the ERS-1 and -2 missions ended in 2000 and 2011, respectively, their archived data are still being mined to make discoveries.

In a recently published study, the accelerated thinning and the retreat of the boundary between the ice and the ocean – the grounding line – in Antarctica’s Pine Island Glacier were documented using ERS radar images.

The results show that, between 1992 and 2011, the glacier’s grounding line retreated by 20 km on average, reaching a maximum of 40 km in the central section. The retreat remained constant while the ice thinned by over 200 m during the 20 years.

This acceleration is consistent with increased melting driven by warming ocean water in the cavity beneath the floating section of the ice sheet.

“A first challenge in tracking the ice thinning at the ocean-ice interface is to measure the displacement of ice with enough precision to be sensitive to the tidal flexing of the ice at the grounding line, the point at which the ice becomes afloat,” said Noel Gourmelen from the University of Edinburgh, co-author of the study.

“A second challenge is to discriminate between the flow of ice of about 4 km a year and the tidal flexure of about 1 m – which are both captured within a single measurement.”

To do this, the scientists used ‘radar interferometry’, combining two or more radar images over the same area to detect changes occurring between scans.

With the frequent coverage by ERS-2 towards the end of its life, scientists were able to extract tidal flexing from the maps of ice speed.

Combined with earlier observations made by both ERS-1 and -2, they mapped 20 years of thinning ice at the Pine Island Glacier with higher accuracy than ever before.

Because the glacier’s melting does not appear to slow down or stabilise at any point, the scientists believe that existing projections of sea-level rise may be too conservative: Pine Island may contribute more than predicted.

While radar imagery from the ERS satellites, as well as from the Envisat mission – which ended in 2012 – provided crucial information on the evolution of the Antarctic ice sheet, continued coverage is needed for monitoring glaciers and rising sea levels.

The upcoming Sentinel-1 mission of the Copernicus programme will routinely measure ice speed at frequent intervals, allowing for more accurate monitoring of the interaction between the oceans and ice globally. The first of the twin-satellite mission, Sentinel-1A, is due for launch on 3 April.