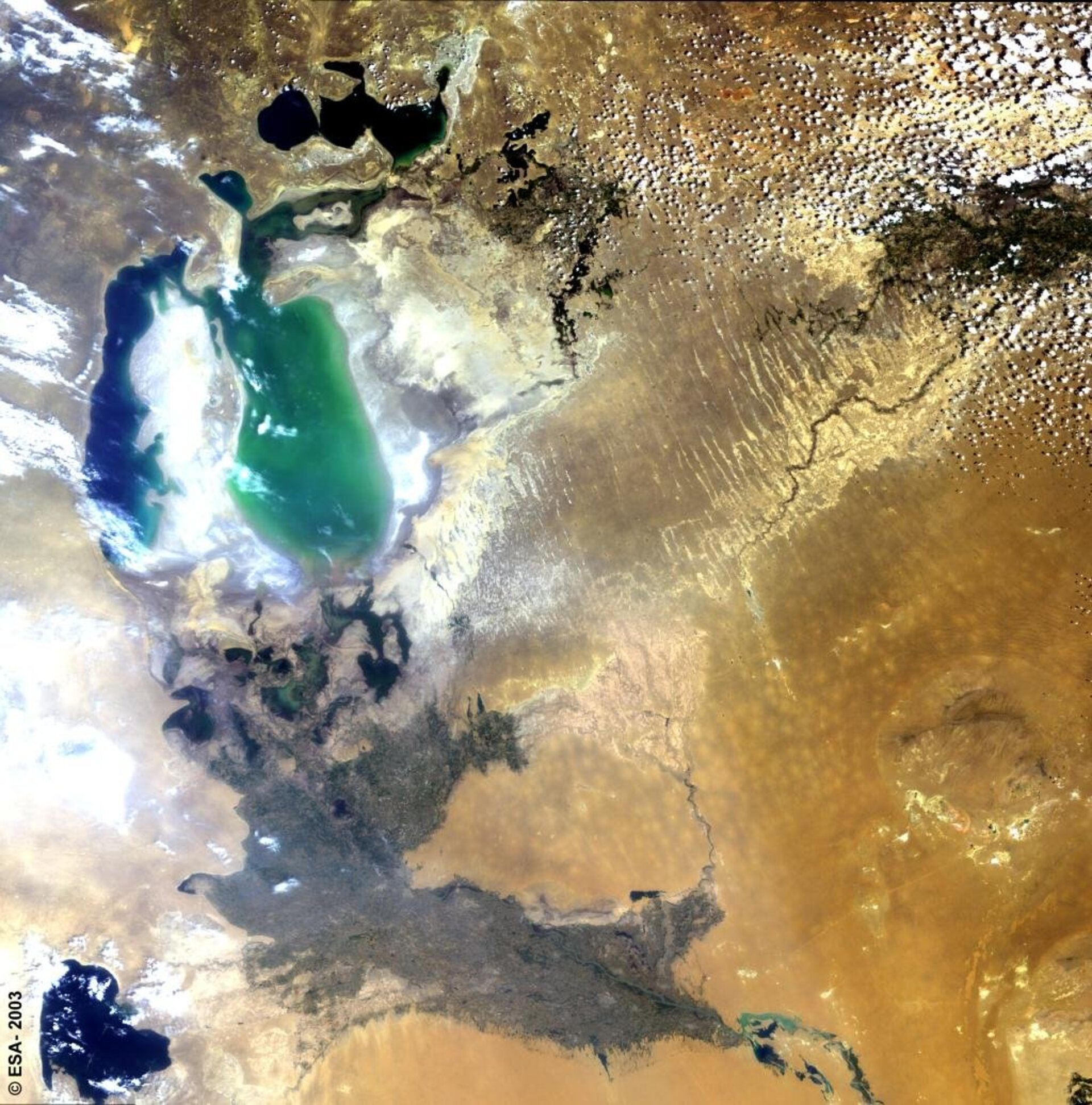 Earth’s youngest desert is shown in this July MERIS satellite image of the Aral Sea in Central Asia. Once the fourth largest lake in the world, over the last 40 years the Aral Sea has evaporated back to half its original surface area and a quarter its initial volume, leaving a 40,000 square kilometre zone of dry white-coloured salt terrain now called the Aralkum Desert.

As its water level has dropped 13 metres since the 1960s the Sea has actually split into two – the larger horseshoe-shaped body of water and a smaller almost unconnected lake a little to its north. This Small Aral Sea is the focus of international preservation efforts, but the Large Aral Sea has been judged beyond saving (the shallowness of its eastern section is clear in the image). It is expected to dry out completely by 2020.

Towards the bottom right can be seen the sands of the Qyzylqum Desert. Already stretching across an area greater than Italy, this desert is set to extend further west in future, eventually merging with its younger Aralkum sibling. The distinctive darker area to the south of the Large Aral Sea is the delta of the Amu Darya river. Its waters support environmentally-unique tugai forests found only in Central Asia, along with land used for rice and cotton cultivation.

The grey area seen in the otherwise whitish zone between the two arms of the Large Aral Sea was once Vozrozhdeniye ('Rebirth') Island, the isolated site of biological warfare experimentation during the Cold War, now joined to the mainland and freely accessible by foot. In reaction to this development, a US-led international team last year moved in to destroy remaining anthrax stocks.

Located on the border between Uzbekistan and Kazakhstan, the Aral Sea shows what happens when the concept of sustainable development is disregarded. Starting in the 1960s, the waters of the two rivers feeding the Sea – the Amu Darya, seen south, and the Syr Darya to the northwest – were diverted by Soviet planners to irrigate thirsty cotton fields across the region. By the 1980s there was little water reaching the lake and it began to shrink.

For local people the results have been disastrous. The Aral Sea's retreating shoreline has left ports landlocked and boats stranded on dry sand. Commercial fishing was forced to halt twenty years ago. The few remaining fishermen commute by car to the water's edge. The waters that remain grow increasingly saline so only salt-resistant fish imported from elsewhere can endure them. Wildlife habitats have been destroyed and communities find themselves without clean water supplies.

The retreat of the waters has also altered the regional microclimate. Winters are colder and the summers hotter. Each year violent sandstorms pick up at least 150,000 tonnes of salt and sand from the dried-up lakebed and transport it across hundreds of kilometres.

The sandstorms are tainted with pesticide residue and have been linked to high regional rates of respiratory illnesses and certain types of cancer. The salty dust does harm to livestock pastures and has even been linked with melting glaciers up in the distant Pamir Mountains, on the Afghanistan border.

Back in the days of the USSR, planners spoke casually of diverting Siberian rivers to save the Aral Sea. Today that certainly will not happen. Instead Central Asian governments have come together to establish the International Fund for Saving the Aral Sea. But their economies are too dependent on cotton exports to end all irrigation.

The Small Aral Sea is still thought to be saveable, and several dikes have been constructed to cut it off from the Large Aral Sea – preventing water loss and salt contamination - but shifting water levels have so far defeated these efforts. The channel connecting the two should soon dry up anyway, preserving the Small Aral Sea at least. Meanwhile researchers are studying the salty Aralkum Desert – effectively the newest land surface on Earth – to see how best to promote plant growth and stabilise the dusty dry lakebed.

The image was acquired on 9 July 2003 by the Medium Resolution Imaging Spectrometer (MERIS) instrument on board ESA's Envisat environmental satellite with a resolution of 300 metres.