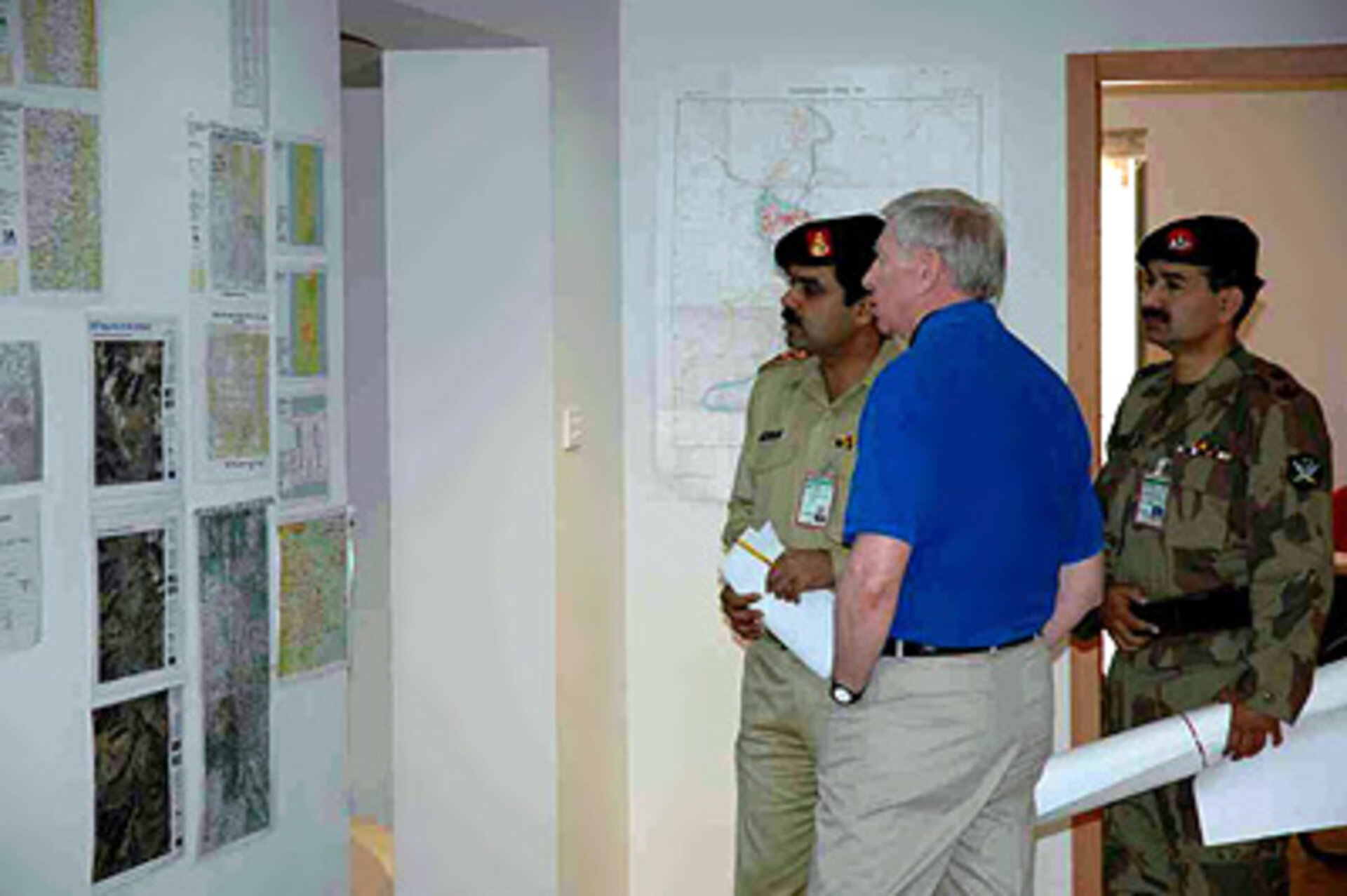 European and international aid agencies responding to the South Asia Earthquake have been supported by rapidly-produced crisis and damage maps based on satellite images.

Now, with the race on to deliver food and shelter to three million people left homeless before the onset of winter, this detailed geographical information provided by the ESA's backed Respond consortium remains vital to humanitarian relief efforts.

At a meeting in Geneva on Thursday held by the United Nations for Ministers of major donor countries for South Asia Earthquake relief efforts, UN Secretary General Kofi Annan and UN Emergency Relief Coordinator Jan Egeland both received sets of maps produced for the disaster relief agencies by Respond, a consortium of European and international organisations combined with industry that works with the humanitarian aid community to improve access to maps, satellite images and geo-information.

The earthquake that struck the Kashmir region on 8 October measured 7.6 on the Richter scale. Its epicentre was near the city of Muzaffarabad, 138 kilometres from the Pakistani capital Islamabad, but the damage done extends into northwest India as well as Afghanistan. More than ten aftershocks – their magnitudes ranging from 5.2 to 6.3 – have since rocked the mountainous region.

The scale of disaster swiftly led to three activations of the International Charter on Space and Major Disasters by the French Civil Protection Agency (DDSC) and the UN Office of Outer Space Affairs (UNOOSA) as well as the Indian Space Research Organisation (ISRO). The Charter prioritises the acquisition of satellite data over disaster areas in support of relief efforts.

The task of satisfying the first two Charter activations was assigned to Respond. In the earthquake's aftermath, crisis mapping was carried out as a joint effort by Respond partners the Center for Satellite Based Crisis Information of the German Aerospace Center and the Rapid Disaster Mapping Service of SERTIT based in France, along with the European Commission's Joint Research Centre (EC-JRC), Infoterra UK and UNOSAT – provider of satellite data for UN agencies who oversaw mapping job management for the activations.

"From the time the Charter was activated we worked closely with the UN Office for the Coordination of Humanitarian Affairs (UNOCHA), which was the head UN agency for this operation," explains Einar Bjorgo of UNOSAT. "We receive requests from end users, including the UN agencies, non-governmental organisations (NGOs) and also government representatives, which we discuss with our Respond partners, then decide who produces what maps based on the needs expressed."

The first maps of the affected region were produced using archived satellite data within 24 hours of the disaster. They were made available to search and rescue teams directly in the field the following day via the NGO Télécoms Sans Frontières who were on the scene to set up a satellite-based communications infrastructure so the maps could be downloaded for printing and distribution.

Both Charter data and available commercial imagery were used by Respond in order to provide as much timely information as possible over the different areas affected. Thanks to mapping specialists at EC-JRC, metric-resolution imagery was provided to the NGO MapAction, whose field crews have also been critical in returning on-site GPS data and combining local geographical information that could be added to Respond products.

To date Respond has now delivered more than 40 crisis and damage maps with various coverage and scales. The partners say this is their busiest incident since the Tsunami Disaster of December 2004. As well as pre-earthquake background maps they include before-and-after scenarios to show the extent of damage to population centres and the effects of landslides on the road network.

"The first need was to obtain an overview of the situation," says Kader Fellah of SERTIT which produced, on a 24/7 basis, 18 damage mapping products over the last three weeks. "One vital point is to know the state of road access because in the mountainous terrain it is really quite difficult to travel by car: a team can drive for most of a day to a distant village and find themselves blocked by a landslide.

"Up-to-date mapping of roads and buildings, showing houses both within villages and dispersed in the countryside creates a very good product for carrying out rescue missions. Furthermore, damage maps derived from optical imagery have been very useful in charting landslide impacts. The French Civil Protection Agency has told SERTIT how useful these have been at headquarters level and in the field".

The South Asia Earthquake maps are accessible for use by a wide range of official users including United Nations agencies, civil protection authorities, governmental relief organisations such as the German THW (Technisches Hilfswerk), and NGOs – including the German and Norwegian Red Cross Societies - with a large take-up from teams at work in the field.

Around 54 000 people have been killed in Pakistan and India, and up to three million survivors of ruined towns and villages have been left homeless across this mountainous region, with winter due to begin by the start of December. Three weeks after the earthquake, production of crisis maps has just finished, but maps supporting relief recovery and reconstruction efforts are still being made.

"Respond maps have a multitude of different uses," explains Stefan Voigt of DLR-ZKI. "These are areas the initial teams performing search and rescue may know nothing about in advance of going there, so there is a basic orientation function.

"In addition, headquarters needs a way to work meaningfully with the people on the ground, and the maps are a way to do this. They may have seen pictures taken from the scene or even from a helicopter, but the maps give a bird's eye view and a greater understanding of the context in-situ: here is the football stadium that was mentioned, there is the school that has fallen down.

"Such an overview helps to plan response activities. In terms of logistics that means how we can get to a given place – seeing what the roads are like, perhaps whether a bridge is still there. The maps can also be used for detailed damage assessment, helping to put numbers to the destruction so donors can visualise its scale and set priorities."

The Charter and Respond

The International Charter on Space and Major Disasters is a joint effort by space agencies worldwide to put space technology at the service of rescue authorities in the event of a major disaster. Each member agency has demonstrated its commitment to using space technology to serve humankind when it is most in need of assistance—when disasters of both natural and human origin strike the world’s communities or wreak havoc on the environment.

Following the UNISPACE III conference held in Vienna, Austria in July 1999, the European and French space agencies (ESA and CNES) initiated the Charter with the Canadian Space Agency (CSA) signing it on 20 October 2000. Other members include the Indian Space Research Organisation (ISRO), the US National Oceanic and Atmospheric Administration (NOAA), the Argentine Space Agency (CONAE) and the Japan Aerospace Exploitation Agency (JAXA).

Respond has been established as part of the pilot services of Global Monitoring for Environment and Security (GMES), a joint initiative between ESA and the European Union to build a global monitoring capability in support of Europe's environmental and sustainable development goals. Respond is an alliance of European and international organisations with industry working with the humanitarian aid community to improve access to geographic information.