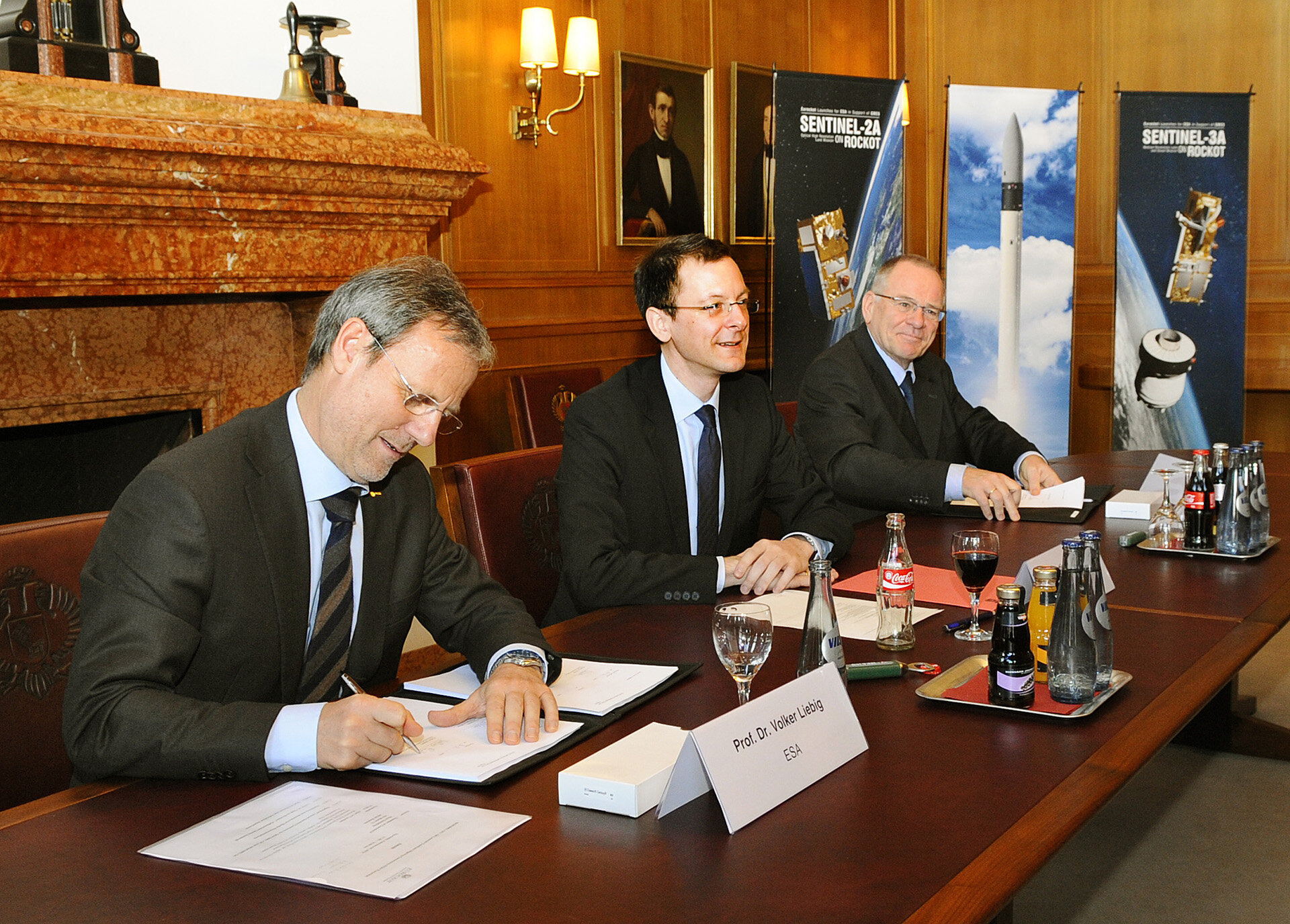 ESA and Eurockot today signed contracts for launching two ESA satellites: Sentinel-2A and Sentinel-3A will fly in 2013 on Rockot vehicles from the Plesetsk Cosmodrome in northern Russia for Europe’s GMES programme.

The Senator for Economics, Labour and Ports of the Free and Hanseatic City of Bremen, Martin Günthner, and the Chief Executive Officer of Astrium Space Transportation, Alain Charmeau, were also in attendance.

Eurockot is based in Bremen, Germany and is a joint venture between Astrium and Khrunichev Space Centre. The company provides low-orbit launches for observation and communication satellites from its dedicated facilities in northern Russia.

“With the launch of the first suite of Sentinels, a new era of Earth observation will start in Europe with the first worldwide operational monitoring system of environment and security,” noted Prof. Liebig.

Sentinel-2 and -3 are two of five Sentinel missions that ESA is developing for Europe’s Global Monitoring for Environment and Security (GMES) programme.

Through GMES, decision-makers will have access to reliable, timely and accurate information services to manage the environment, understand and mitigate the effects of climate change and ensure civil security.

The mission will support humanitarian relief work and the extraction of geophysical variables from vegetation.

The Sentinel-3 mission will carry several instruments to measure variables such as sea-surface topography, sea- and land-surface temperature and ocean colour.

This information will be used to produce a consistent, long-term set of remotely sensed marine and land data for (operational) ocean state analysis, forecasting and services.

Each Sentinel mission is based on a constellation of two satellites to meet revisit and coverage requirements to provide robust datasets for GMES services.

Sentinel-2A and Sentinel-3A are the first members of their constellations.

Eurockot was responsible for the launches of ESA’s GOCE and SMOS Earth Explorer satellites, as well as the Proba-2 technology demonstrator.

This summer, Eurockot will launch the three satellites of ESA’s Swarm mission, which will study Earth’s magnetic field.