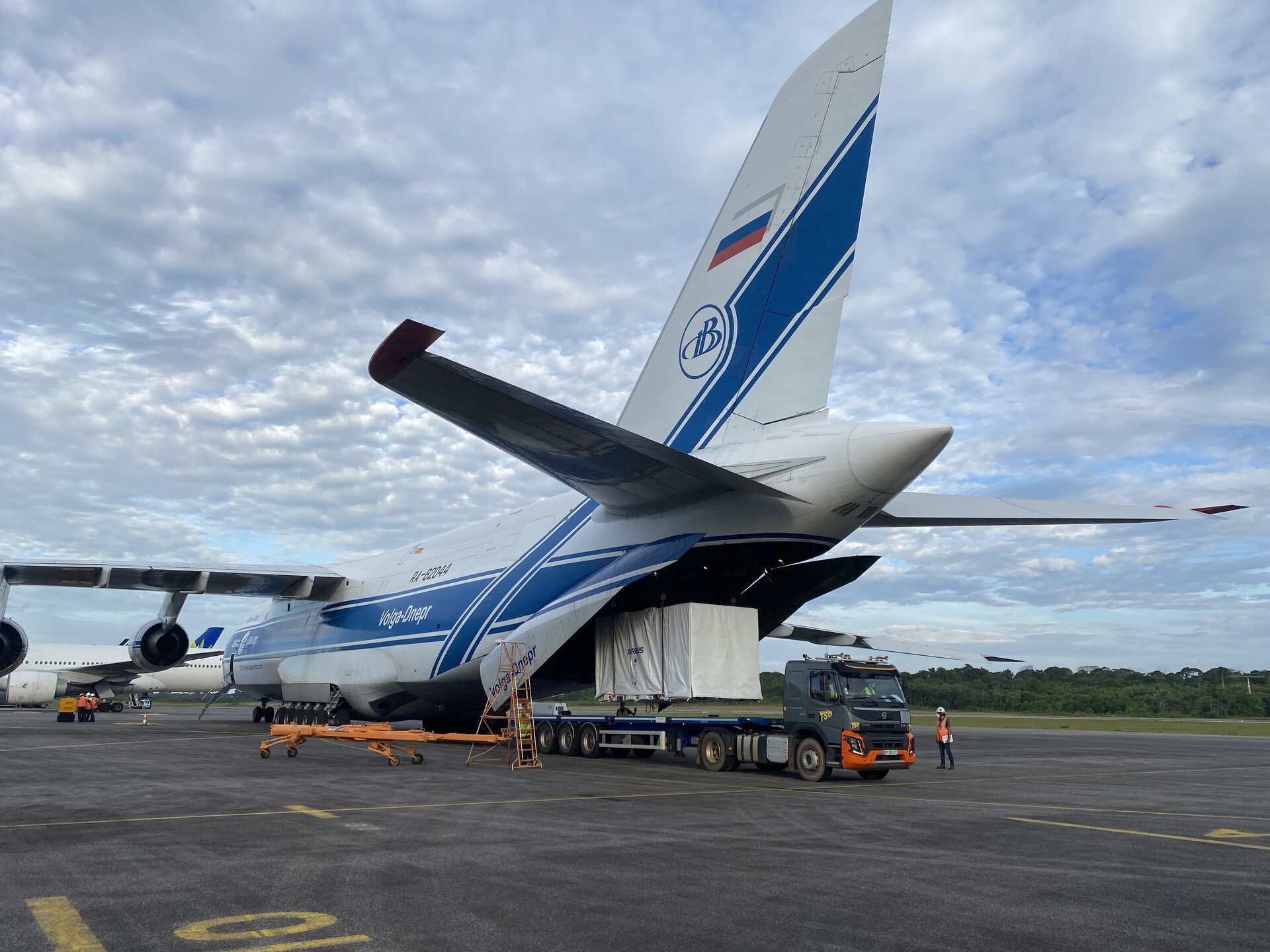 After leaving the Airbus premises in Madrid on 24 September, the Spanish high-resolution land imaging mission, known as SEOSAT-Ingenio, has arrived safely at Europe’s Spaceport in French Guiana, where it will be prepared for launch later this year.

Packed safely within protective containers, SEOSAT-Ingenio was transported together with its co-passenger, the CNES French space agency’s Taranis satellite – both scheduled for launch on a Vega rocket in November. Following the airplane off-loading procedures, SEOSAT-Ingenio was then transferred on a dedicated trailer for transport to Guiana Space Centre.

During the transfer, the convoy respected the speed limit of 50 km/h to avoid any shock to the satellite. After a journey of around two and a half hours, SEOSAT-Ingenio arrived at the Payload Preparation Complex. The arrival of the satellite marks a significant milestone for SEOSAT-Ingenio – an optical Earth-observation mission which will provide high-resolution images of Earth’s land cover.

ESA’s Project Manager for the mission, Alex Popescu, commented, “I am extremely excited that the launch is getting closer, and so is the team and all of the major Spanish space companies who have contributed to the development of the satellite and its ground segment. We are looking forward to delivering this state-of-the-art Earth-imaging system.”

The satellite will have a mass at liftoff of approximately 750 kg and will be placed in Sun-synchronous orbit at an altitude of around 670 km.

SEOSAT–Ingenio, which stands for Spanish Earth-observation satellite, carries a state-of-the-art dual camera that has the ability to image Earth’s land with a resolution of 2.5 m. It has the capability to look sideways, enabling it to access any point on Earth within just three days.

Information from SEOSAT–Ingenio will be used by different Spanish civil, institutional and government users, but also provide information for a wide variety of applications. These include cartography, monitoring land use, urban development and water management. The data will also be used to help map natural disasters such as floods, wildfires and earthquakes.

While SEOSAT–Ingenio is a Spanish national mission, it is the result of an international collaborative effort. The mission is funded by Spain’s Centre for the Development of Industrial Technology (CDTI) of the Ministry of Science and Innovation, but developed by ESA in the context of the European Earth Observation Architecture. 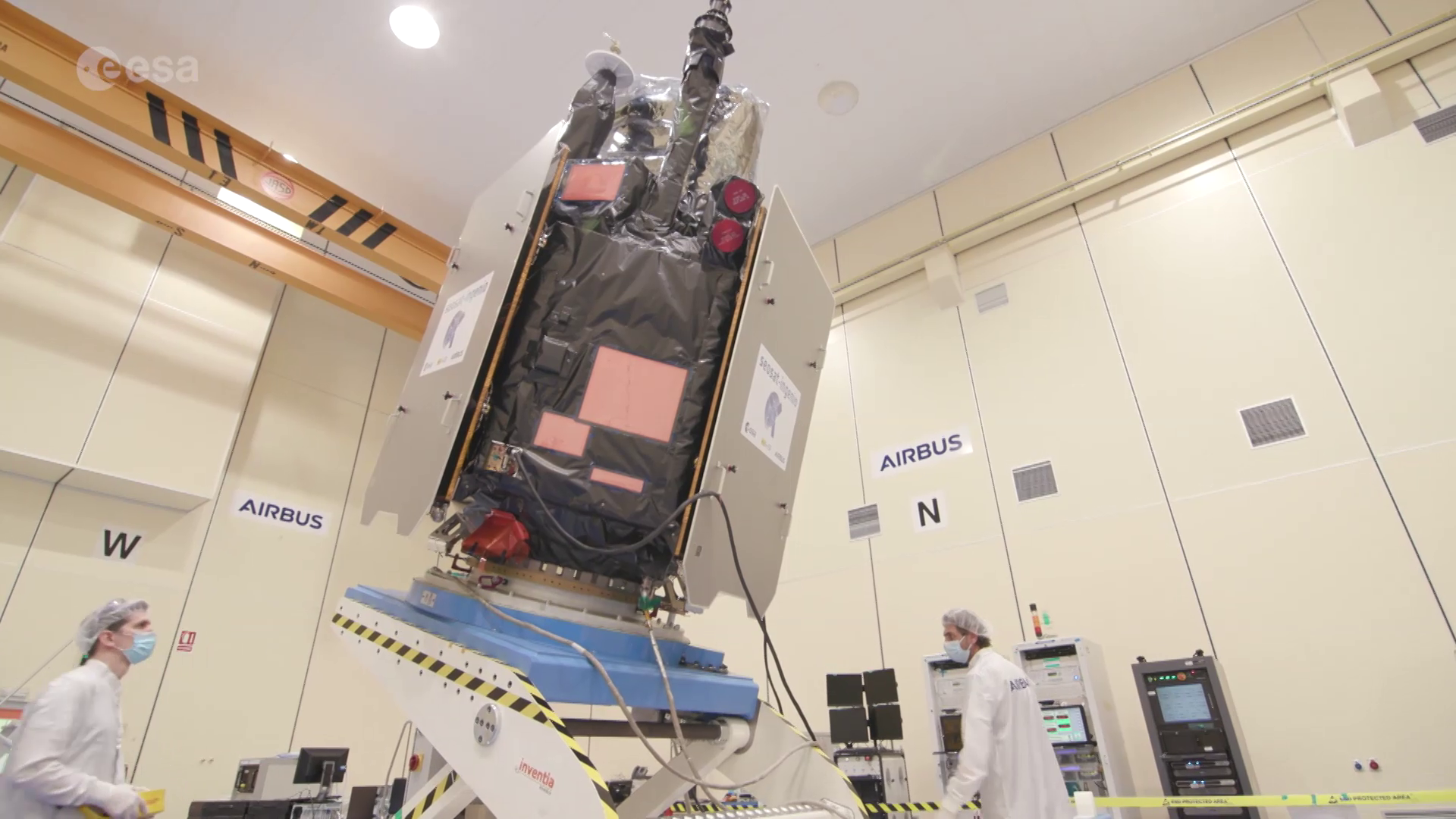 ESA’s Director of Earth Observation Programmes, Josef Aschbacher, commented, “I am very pleased the satellite has arrived safe and sound in Kourou and we are all very much looking forward to its launch. SEOSAT-Ingenio has been developed through a very strong cooperation with Spain with the goal to develop space technology in Spain and to offer an important data source to users, in Spain, in Europe and globally. ”

Jorge Lomba Ferreras, Project Manager from CDTI, said, “SEOSAT-Ingenio is the space programme with the largest Spanish content ever, as Spanish industry is responsible for more than 80% of the industrial work. The capabilities developed by Spain for SEOSAT-Ingenio has been instrumental in the recent success of Spanish industry for Copernicus where, for the first time, Spain will be the prime contractor of a satellite developed by ESA with the European Commission as the final customer”.