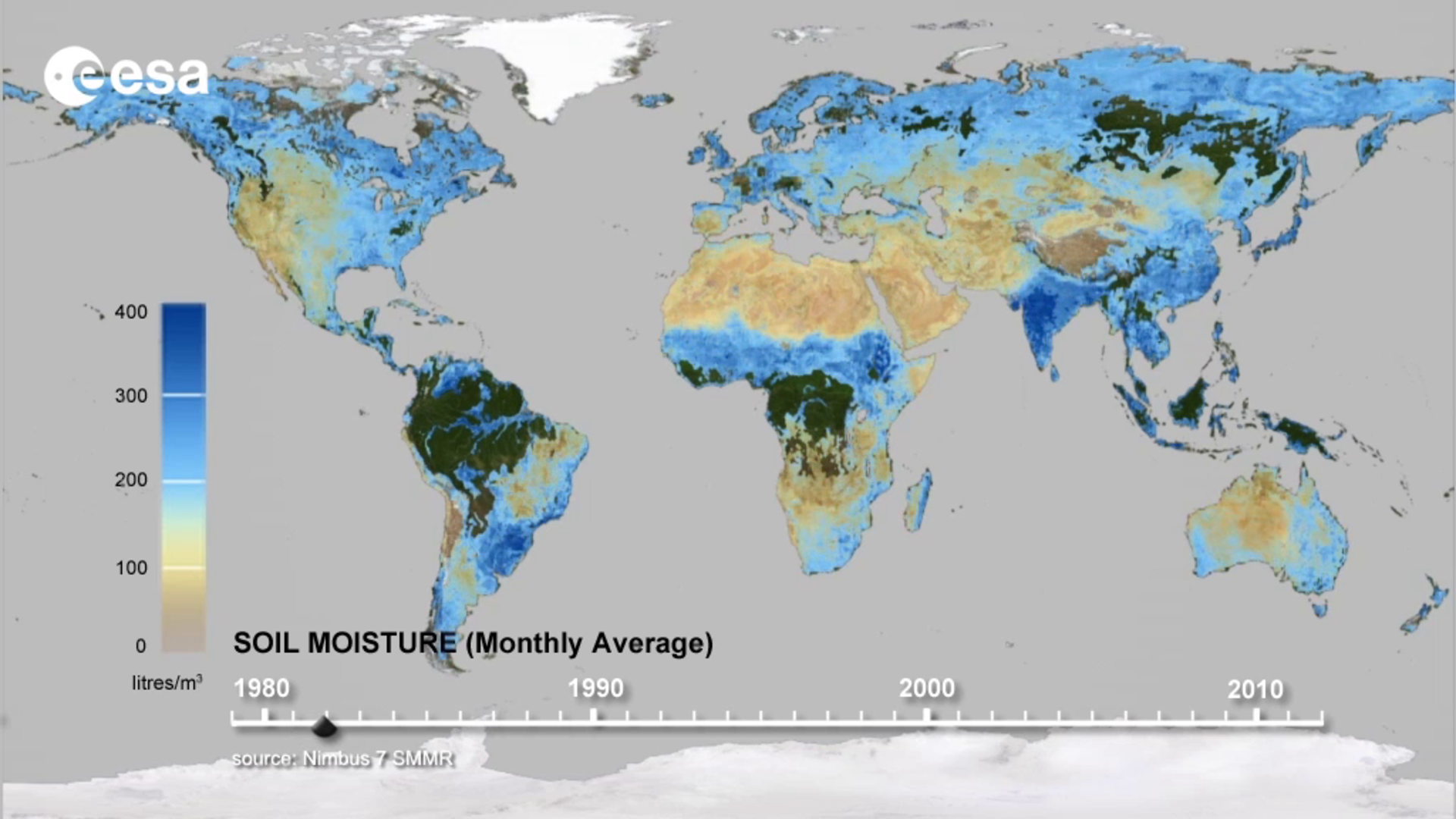 Water held in soil plays an important role in the climate system. The dataset released by ESA is the first remote-sensing soil moisture data record spanning the period 1978 to 2010 – a predecessor of the data now being provided by ESA’s SMOS mission.

The datasets are now available to the science community for feedback analyses and climate model validation.

The amount of water held in global soils makes up only about 0.001% of the total water found on Earth.

It is crucial for plant growth, but is also linked to our weather and climate. This is because soil moisture is a key variable controlling the exchange of water and energy between the land and the atmosphere: dry soil emits little or no moisture to the atmosphere.

A recently detected decline in the global evaporation trend could, for example, directly be explained by limited moisture supply.

The relationship between soil moisture and the climate system is not yet fully understood, and global long-term soil moisture observations have so far not been available. That means the evaluation of climate models with regard to the drying and wetting trends and associated feedbacks with temperature is still difficult in many regions worldwide.

However, to address the current lack of historical long-term soil moisture data for climate applications, ESA has also been supporting the development of a global soil moisture data record derived by merging measurements acquired in the past by a series of previous and current European and US satellites.

These activities were initiated within the Water Cycle Multi-mission Observation Strategy project, led by ITC (The Netherlands), inside ESA’s Support To Science Element programme. The activities are now being continued and refined in the context of the Climate Change Initiative.

ESA is announcing the release of the first soil moisture climate data record spanning the period 1978 to 2010.

The 32 years of data allow for a robust calculation of the climatology, which in turn can be used to calculate anomalies. For example, areas of drying are evident, such as in the central US in 2005, Brazil and East Africa in the summer of 2007, southern China in the winter of 2009–10 and in 2010 in Russia.

The data record was generated by merging two soil moisture datasets. The first is based on active microwave datasets processed by the Vienna University of Technology and is based on observations from the C-band scatterometers on Europe’s ERS-1, ERS-2 and MetOp-A satellites.

The other dataset was generated by the Vrije University of Amsterdam in collaboration with NASA, based on passive microwave observations from the Nimbus-7, DMSP, TRMM and Aqua missions.

The harmonisation of these datasets aimed to take advantage of both types of microwave techniques but proved difficult owing to sensor degradation, drifts in calibration and algorithmic changes in the processing systems.

Since this is the first release of such a product, an active cooperation of the remote sensing and climate modelling communities is required to validate the satellite data jointly to understand modelling results better.

Scientists worldwide can now download, use, validate the dataset and provide feedback to the scientific team for further improvements. Users can register to access the data at www.esa-soilmoisture-cci.org.

As a next step, SMOS will ensure the continuity of the dataset. In addition, NASA’s SMAP mission is planned for launch in November 2014.