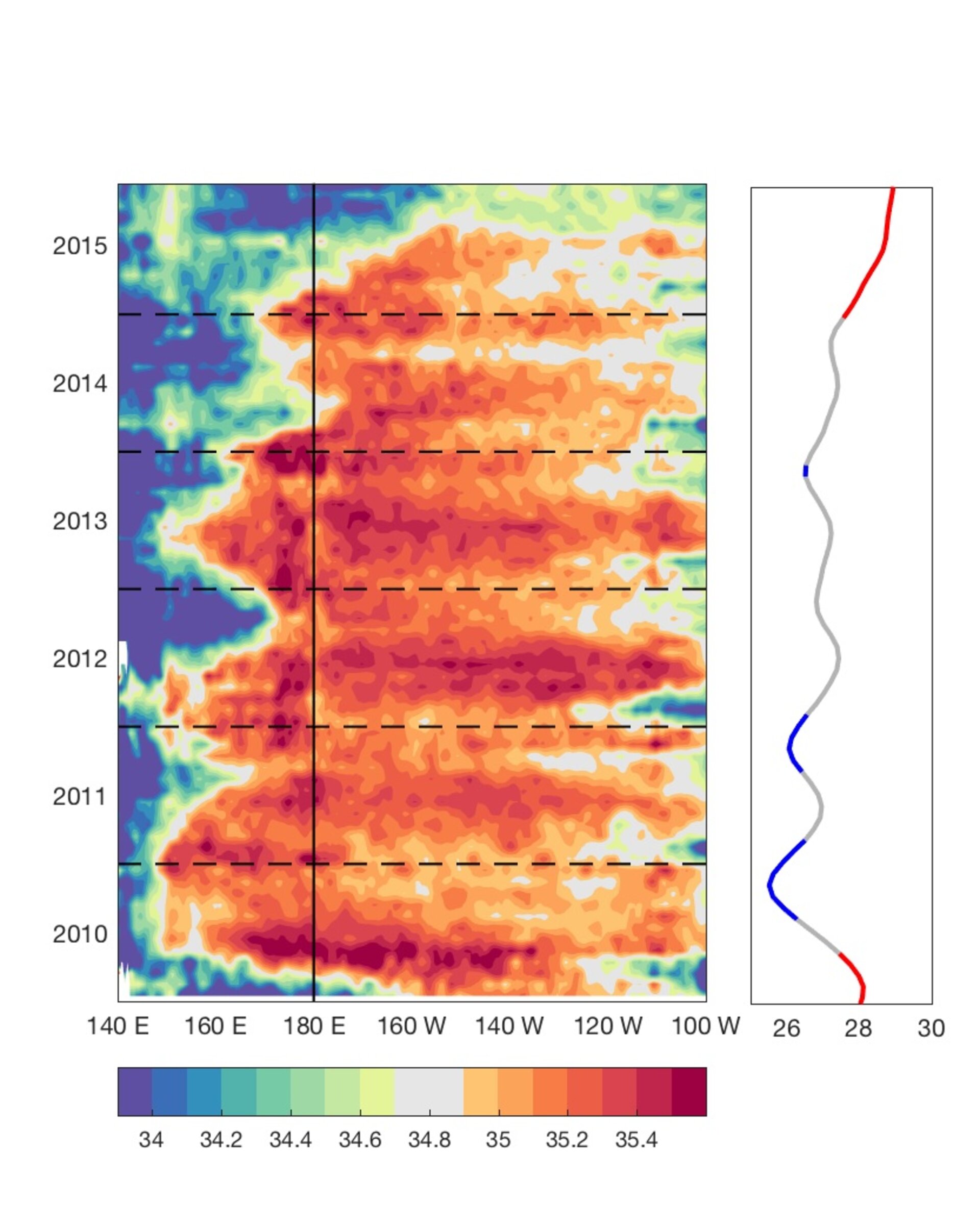 The salinity of the ocean’s surface varies across the world, controlled by the balance between evaporation, precipitation and river runoffs, as well as by ocean dynamics.

In the equatorial Pacific Ocean, surface waters have low salt concentration in the far east and far west boundaries of the basin owing to heavy rain. These areas – known as the Eastern and Western Pacific Fresh Pools – are separated by a large, saltier body owing to the effect of ocean currents and mixing.

Both pools move from east to west on a seasonal basis because of changes in the atmospheric forcing (such as heat, freshwater fluxes and wind speed) that affect rain, evaporation and currents.

The pools’ position and extension are also subject to change on a longer time scale. One reason is El Niño – a warm phase of the ocean–atmosphere coupled phenomenon – occurring every two to eight years, as well as the colder phase La Niña.

The SMOS satellite first acquired sea-surface salinity observations in early 2010 as a weak El Niño was fading out and reversed into a strong La Niña, which lasted until 2012. Lower than usual salinities were observed in early 2010 in the equatorial Pacific as the Western Pacific Fresh Pool extended east. The pool retracted back westward as La Niña settled in.

“Scientists have shown that low-salinity pools modify the ocean’s vertical structure and change the impact of the atmospheric forcing on it,” said Audrey Hasson, researcher at LOCEAN in Paris, France.

“A study combining satellite observations with models is underway to understand the role of salinity in the development of the most recent El Niño event.”

Furthermore, scientists have identified the rain-dominated Eastern Pacific Fresh Pool as an ideal place to carry out experiments to better understand the link between sea surface salinity, freshwater fluxes and the oceanic circulation.

Scientists have not only used SMOS data to examine the extent of the fresh pool at the surface, but also salinity measurements collected by Argo buoys to estimate the depth of the fresh pool.

Datasets were combined with information on currents and precipitation rates to provide a clear 3D picture of the Eastern Pacific Fresh Pool’s evolution between 2010 and 2014.

“Thanks to being in orbit now for more than six years, it is now possible to look at inter-annual differences, which supports research into climate relevant indices such as El Niño and La Niña.”

Launched in 2009, SMOS has provided the longest continuous record of sea-surface salinity measurements from space.

Last year, SMOS operations were extended until 2017 based on the excellent scientific results achieved so far. The extension opens the door to look at new ways of using SMOS data in research and applications, and offer further synergistic opportunities with other missions.