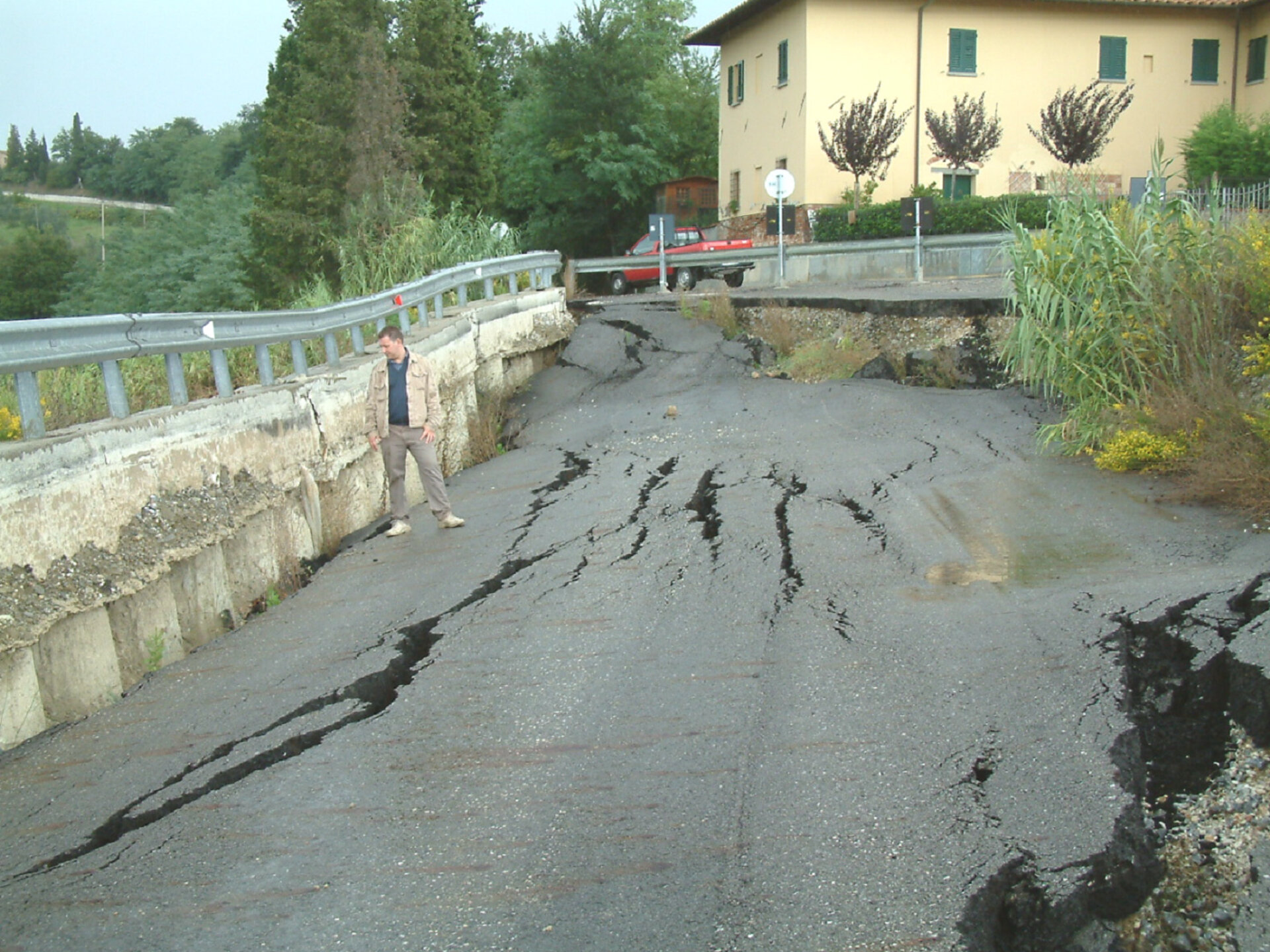 The 240-km-long River Arno winds its way seaward through the tranquil countryside of Umbria and Tuscany, but this tranquillity masks potential danger. There are more than 300 areas within Italy's Arno Basin at high risk of landslides, and over 20 000 individual landslides have been recorded.

Italy's combination of geography, geology and climate makes it one of Europe's most landslide-prone territories, with an average of 54 lives lost for each year of the last half century. However a new service based on satellite imagery can provide early warning of areas susceptible to landslides, by highlighting tiny millimetre-scale slope motion that occurs ahead of larger-scale movement.

The ESA-funded Service for Landslide Monitoring (SLAM) is being applied to the densely populated Arno Basin. More than 350 satellite images of the region, taken by ESA’s ERS satellites, have been combined with ground-gathered data to generate detailed products, in order to identify and assess slope instability and risk across 8 830 square kilometres of territory.

The institution responsible for monitoring the hydro-geological risk in the basin, the Arno National Basin Authority, has used these SLAM products in turn to construct its latest update of the Hydro-geological Structure Plan (Piano di Assetto Idrogeologico or PAI), as required by Italian law.

"The experience of being a SLAM end-user has been very positive," stated Dr Lorenzo Sulli of the Arno National Basin Authority. "Most of all because it has been possible to combine the technical and scientific information with the way we normally work, in support of decision making. This is not always possible with such highly innovative projects."

A workshop for current and potential Italian SLAM users is due to take place on 5 May at ESRIN, ESA's establishment in Italy, in Frascati near Rome. The event will include a detailed discussion of the Arno Basin works, as well as those performed in the Province of Benevento (Campania), another Italian area covered by the SLAM project.

Funded by ESA's Data User Programme (DUP) and begun back in May 2003, the objective of the SLAM project has been to implement landslide mapping and monitoring services combining Earth Observation and in-situ data sources, tailored for the use of institutions involved in hydro-geological risk management.

In Italy, the Ministry of the Environment is a national level SLAM user together with the Italian National Research Council Group for Hydro-geological Disaster Prevention (GNDCI), a research network advising the Italian Civil Protection Department (Dipartimento della Protezione Civile, DPC).

"Compared to traditional data sources, SLAM products have the advantage of uniform coverage of the entire area of the river basin," explained Nicola Casagli of GNDCI. "They also provide important information on the temporal evolution of slope movements, which is very difficult to obtain ordinarily.

"The final results are now undergoing a process of implementation within land planning and risk prevention policies of the Arno Basin National Authority for its PAI. The proposed methodology represents one of the first examples in Europe of full integration of remote sensing data into land regulations concerning landslide hazard."

Defined to meet relevant legislation and end user requirements, the three SLAM products are designed for easy merging into user databases. The first is a Landslide Motion Survey to detect unknown unstable areas and updating information about the state or distribution of activity. The product has a 20-metre spatial resolution and depicts movements with a precision of one centimetre across the entire area of interest.

The second is the Displacement Monitoring Service. Updated more regularly than the Landslide Motion Survey, it has a maximum spatial resolution of five metres and measures ground movement on a scale of millimetres in order to evaluate slight slope movement over time. Finally comes the Landslide Susceptibility Mapping product, which integrates space data with all available thematic maps showing slope, land use, geomorphology and other parameters to create geological hazard maps, for updating every few years.

At the basis of all three SLAM products is a powerful technique called radar interferometry. It works like a space-based version of 'spot the difference'. Multiple radar images of the same site – acquired by spacecraft such as ESA's ERS or Envisat – are specially combined to identify tiny changes in the landscape occurring between acquisitions. More than a decade of archived satellite imagery has been used.

"The SLAM products are currently used to verify issues related to slope instability," Sulli added. "As an end user we have always decided to compare the interpreted information – derived from geological analysis – with the initial data – displacement information from satellite radar interferometry – in order to validate the results independently and on a case-by-case basis.”

"In the specific case of the 'Landslide Susceptibility Mapping' products, the high quality of the input data and of the statistical methodology adopted lead us to consider this product as a basis for future assessment of landslide hazard and risk, particularly for those areas without reliable ground data."

Casagli explained that GNDCI played a role in assessing the SLAM products "in terms of completeness of the methodology and conformity with the international scientific state-of-the-art. This has been particularly relevant with Landslide Susceptibility Mapping, where an innovative method based on artificial neural network technology has been applied to hazard mapping at the basin scale."

SLAM activities are also being carried in Switzerland, with the Swiss Federal Office for Water and Geology (FOWG) as national end user along with several Swiss Cantons.

Preliminary SLAM results were presented in January to the World Conference on Disaster Reduction in Kobe, Japan– the country with the highest rate of landslides in the world.