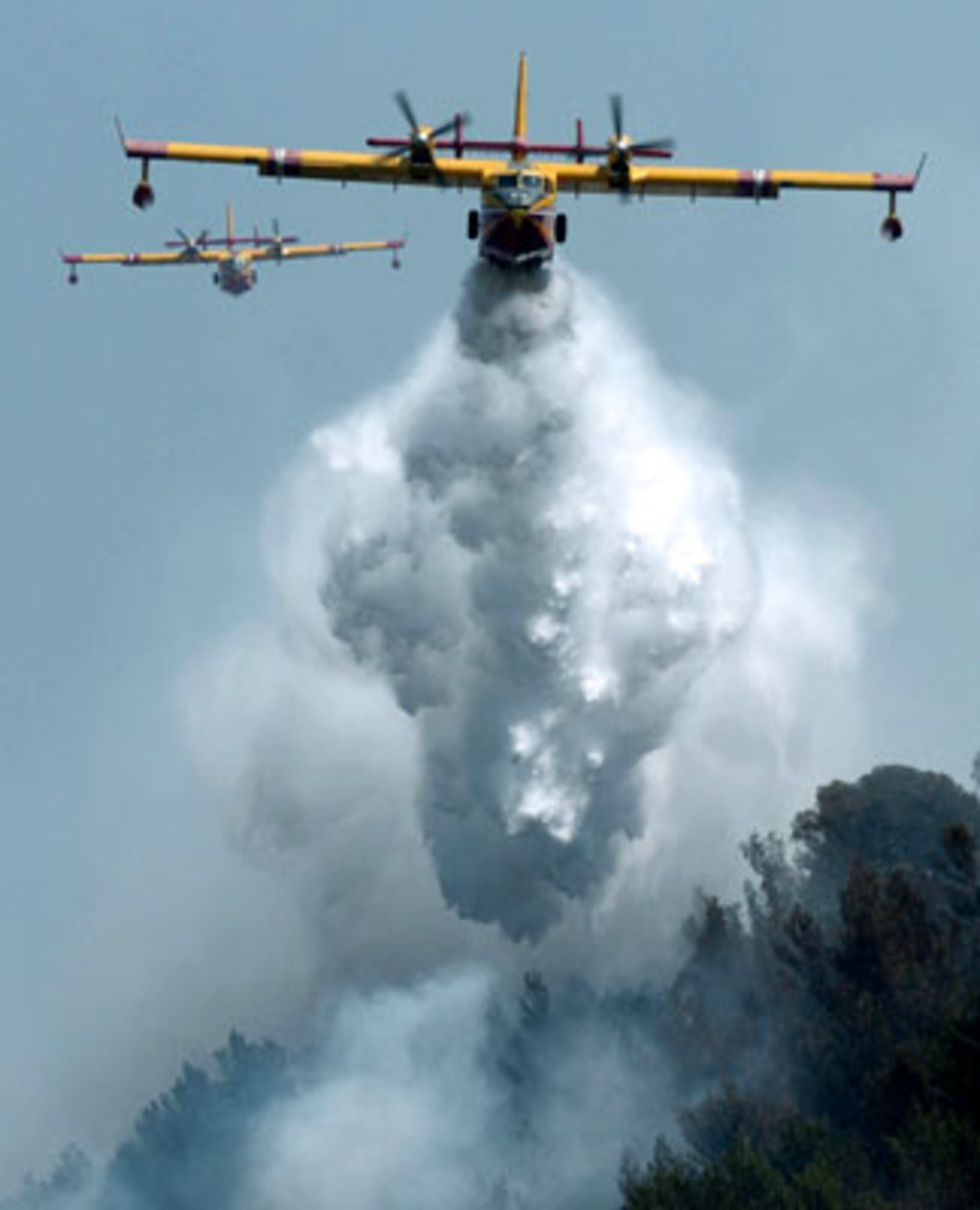 Burning with a core heat approaching 800°C and spreading at up to 100 metres per minute, woodland blazes bring swift, destructive change to landscapes: the resulting devastation can be seen from space. An ESA-backed service to monitor European forest fire damage will help highlight areas most at risk of future outbreaks.

Last year's long hot summer was a bumper year for forest fires, with more than half a million hectares of woodland destroyed across Mediterranean Europe. So far this year fresh fires have occurred across Portugal, Spain and southern France, with 2500 people evacuated from blazes in foothills north of Marseille.

According to the European Commission, each hectare of forest lost to fire costs Europe's economy between a thousand and 5000 Euros.

The distinctive 'burn scars' left across the land by forest fires can be identified from space as a specific reddish-brown spectral signature from a false-colour composite of spectral bands from optical sensors in the short wavelength infrared, near infrared and visible channels.

A new ESA-backed, Earth Observation-based service is making use of this fact, employing satellite imagery from SPOT and Landsat to automatically detect the 2004 burn scars within fire-prone areas of the Entente region of Southwest France, within the Puglia and Marche regions of Italy and across the full territory of Spain.

Burn scar detection is planned to take place on a seasonal basis, identifying fires covering at least one hectare to a standard resolution of 30 metres, with detailed damage assessment available to a maximum resolution of 2.5 metres using the SPOT 5 satellite.

"To cope with fire disasters, the most affected Departments in the south of France have decided to join forces to ensure effective forest fire protection," explained Nicolas Raffalli of CEREN. "Within the Entente region we have an existing fire database called PROMETHEE, which is filled out either by firemen, forestry workers or policemen across the 13 Departments making up the region."

Current methods of recording fire damage vary greatly by country or region. The purpose of this new service – part of a portfolio of Earth Observation services known as Risk-EOS – is to develop a standardised burn scar mapping methodology for use throughout Europe, along with enabling more accurate post-fire damage assessment and analysis of vegetation re-growth and manmade changes within affected areas.

"We want to link up PROMETHEE with this burn scar mapping product from Risk-EOS to have a good historical basis of information," Raffalli added. "The benefit is that it makes possible a much more effective protection of the forest."

Characterising the sites of past fires to a more thorough level of detail should mean that service users can better forecast where fires are most likely to break out in future, a process known as risk mapping.

Having been validated and geo-referenced, burn scar maps can then be easily merged with other relevant geographical detail. The vast majority of fires are started by the actions of human beings, from discarding cigarette butts up to deliberate arson. Checking burn scar occurrences against roads, settlements and off-road tracks is likely to throw up correlations.

These can be extrapolated elsewhere to help identify additional areas at risk where preventative measures should be prioritised. And overlaying burn scar maps with a chart of forest biomass has the potential to highlight zones where new blazes would burn the fiercest. Once such relatively fixed environmental elements, known as static risks, are factored in, other aspects that change across time – including temperature, rainfall and vegetation moisture – can be addressed. These variables are known as dynamic risks. At the end of the risk mapping process, the probability of fire breaking out in a particular place and time can be reliably calculated.

The Risk-EOS burn scar mapping service began last year. The intention is to develop further fire-related services by the end of 2007, including daily risk maps combining EO with meteorological and vegetation data.

Another planned service will identify 'hot spots' during fires, and map fire events twice a day, permitting an overall assessment of its development and the damage being done. A 'fires memory atlas' set up at national or regional level will allow the routine sharing of all information related to forest fire events and fire risk.

"For the future I think near-real time fire and hot spot mapping would obviously be extremely useful," Raffalli concluded. "With these products those managing the situation could see where the fire is, as well as the hot spots inside it. They can then deploy ground and aerial resources with maximum efficiency."

Italy's National Civil Protection Department is providing advice on the implementation of the Risk-EOS service, based on previous experience with an ESA Data User Programme (DUP) project called ITALSCAR.

Run for ESA by the Italian firms Telespazio una Societá Finmeccanica and Vitrociset, ITALSCAR charted burn scars across the whole of Italian territory occurring between June and September during the years 1997, 1998, 1999 and 2000.

For the last quarter of a century, Italian legislation had required that all burned areas be recorded and mapped, as no land use change is permitted to occur on such terrain for 15 years after a blaze, no new building construction for the next ten years, and no new publicly funded reforestation for a half-decade.

However the mapping of burn scars is the responsibility of local administration and their methodologies and overall effectiveness are highly variable. No central cartographic archive of burn scar perimeters exists: the closest equivalent is a cardset index (Anti Incendio Boschivi or AIB) recording fire-fighting interventions by the Italian Forest Guards.

The ITALSCAR burn scar maps were produced across a wide variety of different forest classes. Burn scars were mapped pixel by pixel using an automated software system, followed up with manual photo-interpretation for quality assurance. To ensure confidence in the results they were validated using ground surveys and checked against reports from local fire brigades and Forest Guards' AIB records.

The Risk-EOS burn scar mapping service is based around this same methodology.

Managed by Astrium, Risk-EOS also incorporates services for flood as well as fire risk management. It forms part of the Services Element of Global Monitoring for Environment and Security (GMES), an initiative supported jointly by ESA and the European Commission and intended to establish an independent European capability for worldwide environmental monitoring on an operational basis.