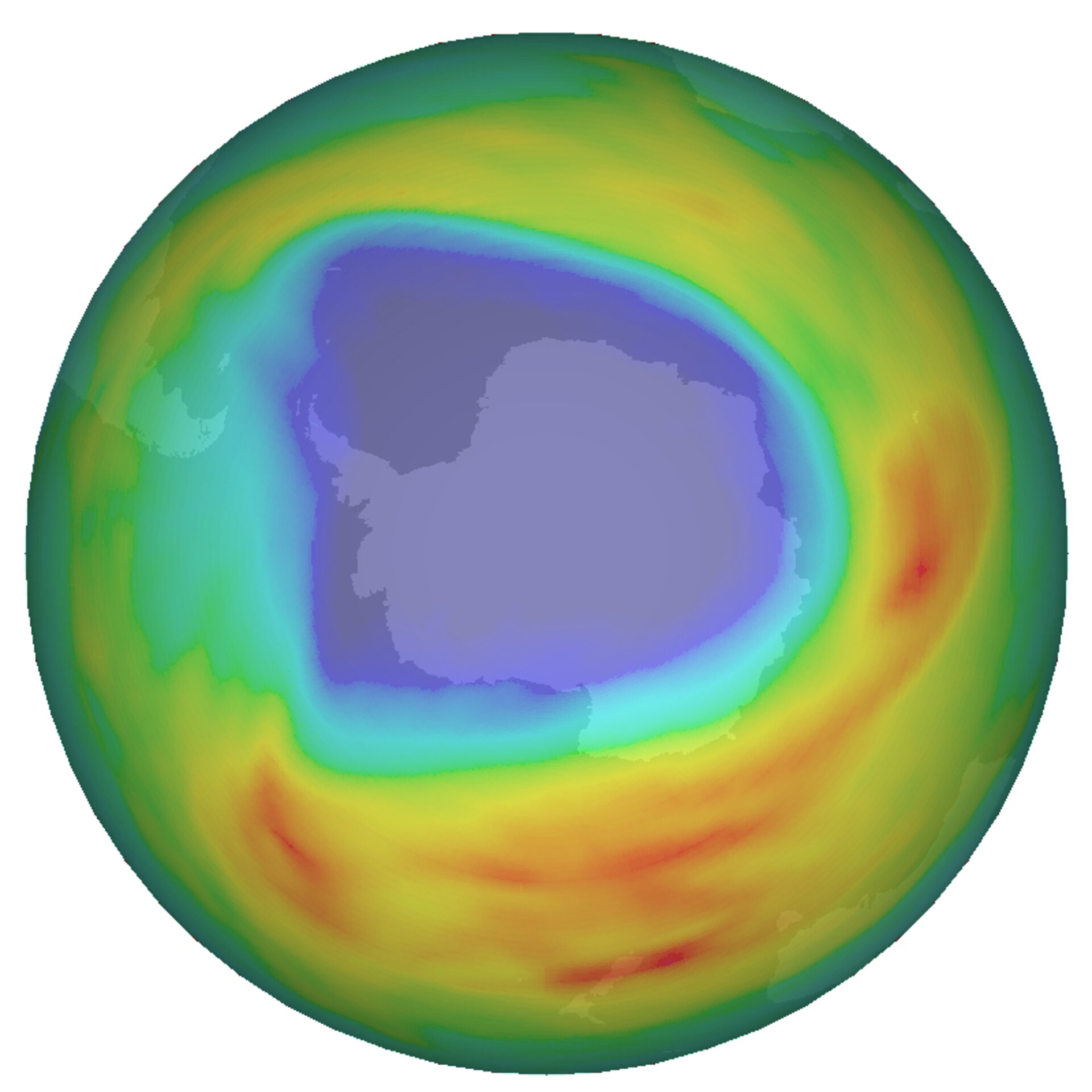 Ozone is a protective atmospheric layer found in about 25 kilometres altitude that acts as a sunlight filter shielding life on Earth from harmful ultraviolet rays, which can increase the risk of skin cancer and cataracts and harm marine life.

The depletion of ozone is caused by extreme cold temperatures at high altitude and the presence of ozone-destructing gases in the atmosphere such as chlorine and bromine, originating from man-made products like chlorofluorocarbons (CFCs), which were phased out under the 1987 Montreal Protocol but continue to linger in the atmosphere.

Depending on the weather conditions, the size the Antarctic ozone hole varies every year. During the southern hemisphere winter, the atmosphere above the Antarctic continent is kept cut off from exchanges with mid-latitude air by prevailing winds known as the polar vortex – the area in which the main chemical ozone destruction occurs. The polar vortex is characterized by very low temperatures leading to the presence of so-called stratospheric clouds (PSCs).

As the polar spring arrives in September or October, the combination of returning sunlight and the presence of PSCs leads to a release of highly ozone-reactive chlorine radicals that break ozone down into individual oxygen molecules. A single molecule of chlorine has the potential to break down thousands of molecules of ozone.

Julian Meyer-Arnek of the German Aerospace Centre (DLR), which monitors the hole annually, explained the impact of regional meteorological conditions on the time and range of the ozone hole by comparing 2007 with 2008.

"In 2007 a less concentric and larger polar vortex led to an early onset of the ozone destruction in the sunlit parts of the polar vortex," Meyer-Arnek said. "Therefore, we saw an ozone hole formation in the beginning of September 2007 which corresponded to the average behaviour of the years 1995-2006."

"In 2008 a more concentric polar vortex led to a delay of the onset of the ozone destruction of about one week. The preconditioning of the polar chemistry was about the same for both years, although in 2008 the temperatures were slightly below the 2007 temperatures leading to slightly improved formation of PSCs," he continued.

"Since the polar vortex remained undisturbed for a long period, the 2008 ozone hole became one of the largest ever observed."

DLR’s analysis is based upon the Scanning Imaging Absorption Spectrometer for Atmospheric Cartography (SCIAMACHY) atmospheric sensor onboard ESA’s Envisat, the Global Ozone Monitoring Experiment (GOME) aboard ESA’s ERS-2 and its follow-on instrument GOME-2 aboard EUMETSAT’s MetOp.

Scientists say that since the size and precise time of the ozone hole is dependent on the year-to-year variability in temperature and atmospheric dynamics, the detection of signs of ozone recovery is difficult.

"In order to detect these signs of recovery, a continuous monitoring of the global ozone layer and in particular of the Antarctic ozone hole is crucial," Meyer-Arnek said.

In order to train the next generation of atmospheric scientists to continue the monitoring, students at ESA’s Advanced Atmospheric Training Course, held 15–20 September at University of Oxford, UK, were given the task of analysing this year’s ozone hole with Envisat sensors.

Studying the Envisat data, the students’ findings were in line with atmospheric scientists that the south polar vortex was more concentric in 2008 than in 2007, leading to a relatively late onset of ozone depletion, and that the size of this year’s hole is similar to previous years.

"This exercise led us to realise that although many questions have been answered and much has been learned about the stratospheric chemistry and atmospheric dynamics driving ozone hole behaviour, many new questions must be raised especially concerning ozone hole recovery," said Deborah C Stein Zweers, a post-doc satellite researcher from the Royal Netherlands Meteorological Institute (KNMI) who attended the course.

"We want to know when the ozone hole will recover, how its recovery will be complicated by an environment with increasing greenhouse gases and how atmospheric dynamics will shape future ozone holes. These and many other questions will attract the attention of our generation of scientists for the next several decades."