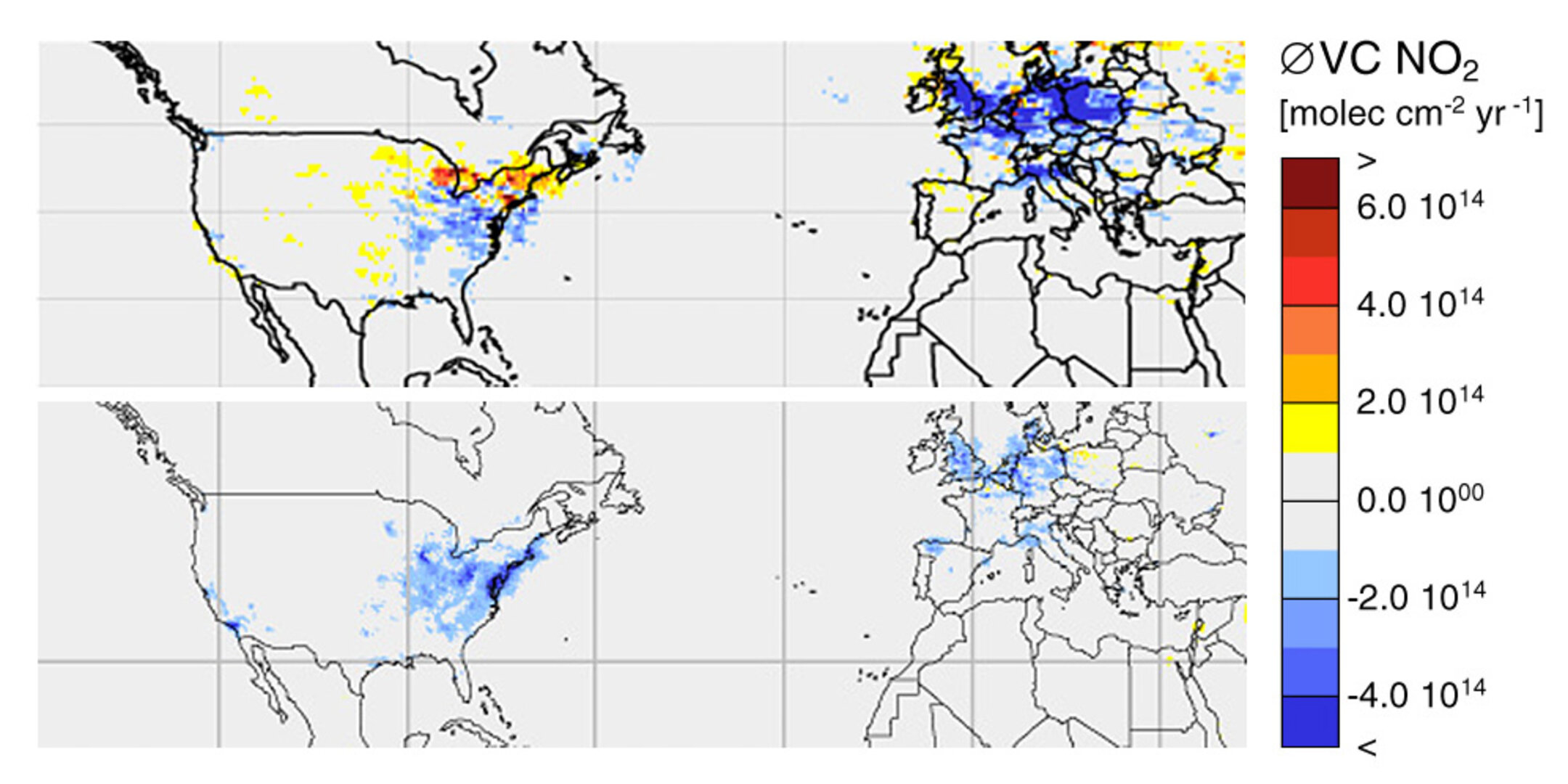 Satellite measurements show that nitrogen dioxide in the lower atmosphere over parts of Europe and the US has fallen over the past decade. More than 15 years of atmospheric observations have revealed trends in air quality.

As the world’s population increases, economies in many countries are also growing and populations are concentrating in large cities. With the use of fossil fuels still on the rise, pollution in large cities is also increasing.

Nitrogen dioxide is an important pollutant in the troposphere, the lowest portion of our atmosphere.

Satellite observations of it began with the launch of the ERS-2 satellite in 1995 and its GOME instrument, originally designed for monitoring atmospheric ozone.

Monitoring continued with the Sciamachy sensor on Envisat, OMI on NASA’s Aura and GOME-2 on Eumetsat’s MetOp.

This set of instruments shows, that over the years, nitrogen dioxide levels have decreased in the US and Europe, but increased in the Middle East and parts of Asia.

“The changes observed from space can be explained by two effects: increased use of fossil fuels in evolving economies, leading to increased pollution and improvements in technology – like cleaner cars – leading to reduced pollution,” explained Andreas Richter, a scientist with the Institute of Environmental Physics at the University of Bremen in Germany.

“These changes in pollution levels are surprisingly rapid, and satellites are the only way to monitor them globally.

“For this, the long-term availability of satellite instruments that can monitor pollution is of key importance.”

In the US, urban areas in the state of California showed a consistent drop in nitrogen dioxide.

“Airborne and ground-based measurements supported the findings from the satellite data,” said Si-Wan Kim from the US National Oceanic and Atmospheric Administration.

“The satellite measurements are now being used to improve the emission inventory in California.”

These results were recently presented at the ‘Advances in Atmospheric Science and Applications’ conference in Bruges, Belgium.

Organised by ESA, the conference looked at the remote sensing of trace gases in the atmosphere, clouds and aerosols, greenhouse gases and air quality monitoring.

Beside the scientific exploitation of satellite data, the conference also focused on how information from past Earth observation missions can complement current data for climate monitoring.

The use of current mission data for defining future missions and exploitation programmes is also important.

The Sentinel-4 and -5 missions being developed under Europe’s Global Monitoring for Environment and Security (GMES) programme will continue to provide measurements of atmospheric chemistry, enabling the development of services especially for monitoring air quality over Europe.