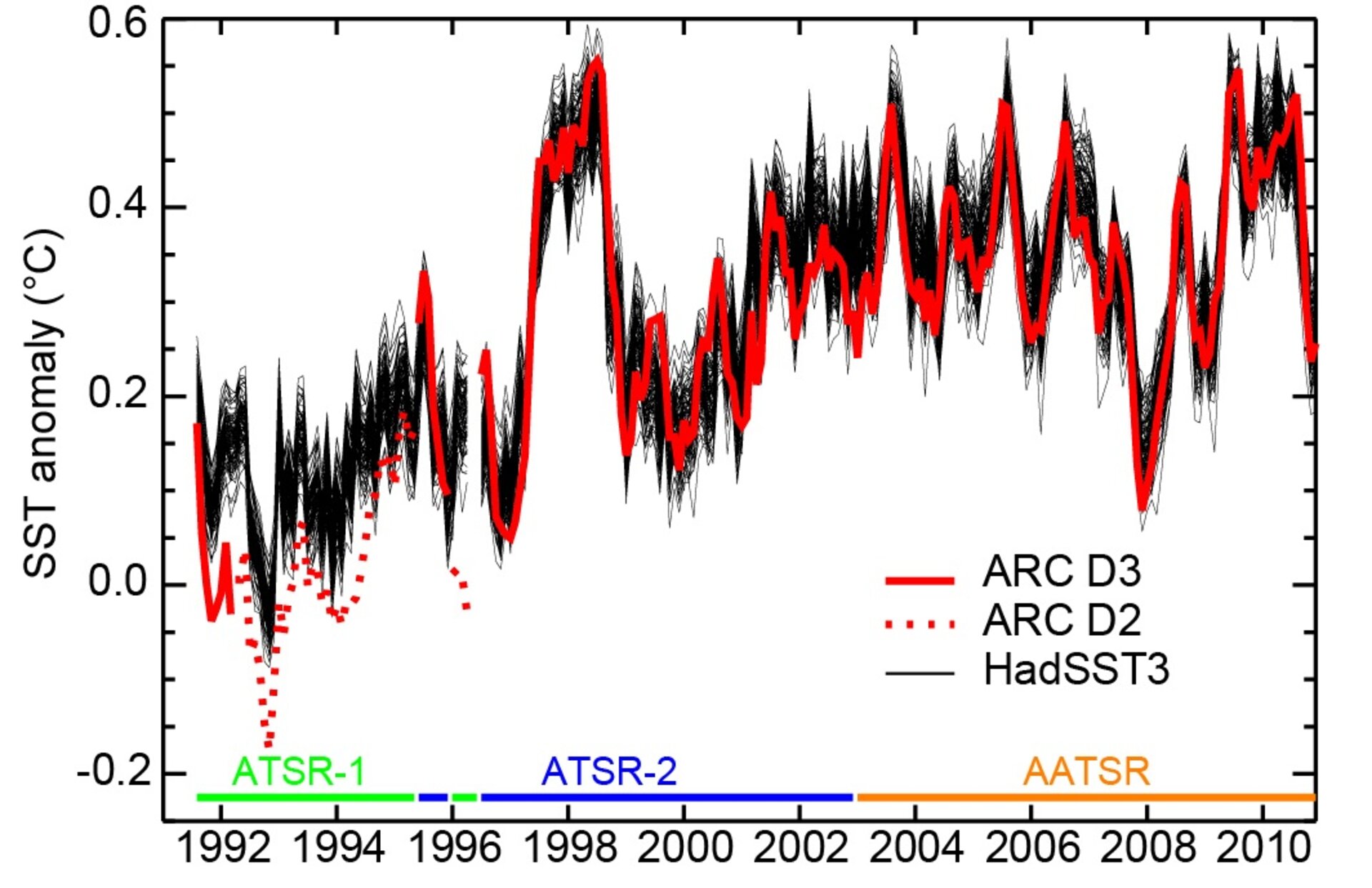 Satellite observations of global sea-surface temperature show that a 30-year upward trend has slowed down within the last 15 years. Climate scientists say this is not the end of global warming, but the result of a rearrangement in the energy flow of the climate system and, in particular, how the ocean stores heat.

Like flying thermometers, some satellites carry instruments that provide a global view of the surface temperature of oceans and seas. Measuring the sea-surface temperature is important for improving weather and ocean forecasting and climate change research.

Satellite and local readings show that sea-surface temperature has been rising rapidly since the 1970s, in line with the overall warming of our planet. But this increase has significantly slowed in the last 15 years.

In contrast, other variables such as increasing atmospheric carbon dioxide, rising sea levels and declining Arctic sea ice have not experienced the same reduction in trend and therefore demonstrate that Earth’s climate continues to change.

Scientists have speculated that one of the causes of this ‘plateau’ in sea-surface temperature could be a change in the exchange of ocean water between warm, surface waters and cold, deep waters below 700 m – as if the warming is ‘hiding’ underwater. Temperature measurements at this depth cover a relatively short period.

But the warm water won’t hide below the surface forever: scientists believe that it may re-emerge later or affect other climate indicators, such as sea level or ocean circulation. 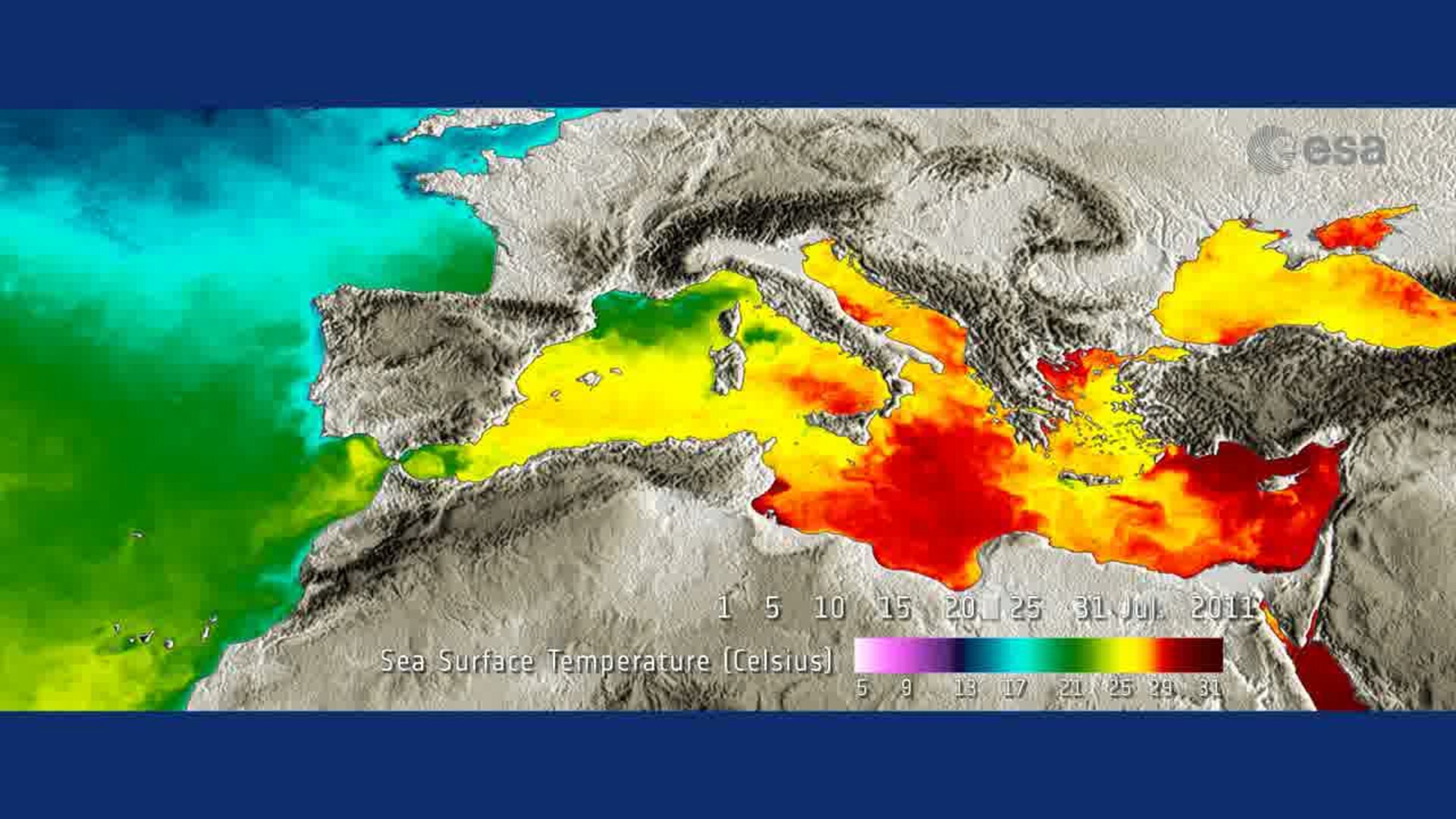 ESA’s Climate Change Initiative, or CCI, responds to the need for continuous data on the energy budget in our climate system to understand better the slowing increase in sea-surface temperature. Satellite readings enable the detection of real trends in climate.

“We can observe changes in sea-surface temperature from the 19th century onwards using millions of measurements gathered by voluntary observers at sea and by buoys that drift around the oceans,” said Nick Rayner from the Met Office Hadley Centre in the UK.

“CCI is developing sea-surface temperature information from satellites that provides an independent assessment of these changes over the last few decades.”

Science leader for this project, Chris Merchant from the University of Reading, says, “When comparing changes in global average sea-surface temperature from these two sources, we see they provide a consistent picture since 1996, when the most reliable satellite measurements began.

“We are now working on applying our methods to earlier satellites, in order to extend reliable satellite-based information back into the 1980s.”

Nick Rayner adds: “That will allow us to combine, with increased confidence, the sea-surface temperature information from satellites with measurements gathered in the ocean, to build a better, more complete picture of past changes.”

These topics, among others, were discussed this week during the CCI’s Collocation Meeting at ESA’s Centre for Earth Observation in Frascati, Italy.

ESA began monitoring sea-surface temperature in 1991 with the first Along-Track Scanning Radiometer on the ERS-1 satellite, followed by instruments on ERS-2 and Envisat.

ESA will continue observations of sea-surface temperature with the upcoming Sentinel-3 mission, being developed for Europe’s Copernicus programme.